Written by Greg Williams
Changes to a gene called LZTR1 predispose people to develop a rare disorder where multiple tumors called schwannomas form near nerve pathways, according to a study published today in the journal Nature Genetics and led by researchers from the University of Alabama at Birmingham. 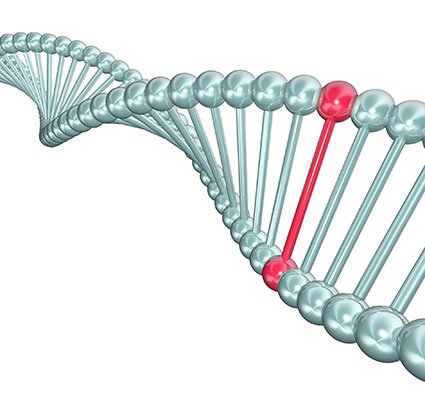 The formation of multiple schwannomas is one sign that a person has the genetic disorder called schwannomatosis, which is one of the three major forms of neurofibromatosis, besides neurofibromatosis types 1 and 2. The condition is so named because the tumors originate in Schwann cells that form a nerve sheath and insulate nerve pathways to cause severe, chronic pain in many patients.

To date, physicians cannot give most patients a confirmed diagnosis for schwannomatosis, even if they show symptoms, because changes in genes linked to the condition by past studies explain only about 50 percent of familial and less than 10 percent of sporadic cases.

Work in 2007 determined that inheritable mutations in SMARCB1 predisposed to schwannomatosis. In addition, the schwannomas showed a loss of the long arm of chromosome 22, and different mutations in the neurofibromatosis type 2 (NF2) gene were found in each tumor studied.

Despite these many known details, much of the risk for schwannomatosis remained unexplained going into the current study. Several research groups had proposed that other schwannomatosis-predisposing genes existed, but no one had found any.

Specializing in genetic studies for all forms of the neurofibromatoses, the UAB Medical Genomics Laboratory chose to focus its research on a subset of schwannomatosis samples that did not harbor SMARCB1 mutations, which framed their experiments such that the role of LZTR1 was revealed.

“We have been working urgently to identify the genetic mechanisms behind these diseases because doing so is central to efforts to understand schwannoma tumor development as well as to identify new drug treatments,” said Ludwine Messiaen, Ph.D., director of the Medical Genomics Laboratory, professor in the Division of Clinical Genetics in the Department of Genetics within the UAB School of Medicine and corresponding study author. “This is pertinent as only some of the schwannomas can be surgically removed without neurological consequences, and there is no widely accepted approach for treating the severe, chronic pain in these patients.”

The study, conceived and coordinated by Arkadiusz Piotrowski of the University of Gdansk in Poland and Messiaen, resulted in the identification of LZTR1 on chromosome 22q as a novel tumor-suppressor gene predisposing to multiple schwannomas in patients without a mutation in SMARCB1. The results were seen in patients whose schwannomas also showed a loss of the long arm of chromosome 22 and a different somatic NF2 mutation in each tumor.

The team found that in all 25 schwannomas studied from 16 unrelated schwannomatosis patients, all tumors showing a loss of the long arm of chromosome 22 and a different somatic NF2 mutation in each tumor also had LZTR1 mutations present, strongly supporting the contribution to the disease by the combination of these factors.

Both causal genes, LZTR1 and SMARCB1, show a potential functional link to chromatin remodeling mechanisms, which play a crucial role in cell differentiation and adaptation to environmental stimuli. Further, LZTR1 and SMARCB1 are known to interact with histone deacetylase 4 or HDAC4, which is a target for histone deacetylase inhibitors, a new class of anti-tumor drugs. The present findings will encourage further studies aiming at potential treatment for schwannomatosis.

The results published today will have broader implications, as LZTR1 was recently shown, in an independent study, to contribute to tumor development in a subset of patients with glioblastoma multiforme, the most aggressive type of brain tumor.

“Recent independent studies have shown that SMARCB1 and LZTR1 interact with histone deacetylase 4, and histone deacetylase inhibitors are emerging as a new class of anti-tumor drugs,” said Bruce Korf, M.D., Ph.D., chair of the UAB Department of Genetics, a study co-author and principal investigator for The Neurofibromatosis Clinical Trials Consortium at UAB. “One of these drugs, called AR-42, was recently reported to inhibit growth in schwannoma and meningioma cells. This creates the prospect of further testing of the drug as a potential treatment for schwannomatosis.”

Along with Messiaen and Piotrowski, study authors within the UAB Medical Genomics Laboratory were Jing Xie, Ying F. Liu, Alicia Gomes and Chuanhua Fu. Also making important contributions were Piotr Madanecki with the Medical University of Gdansk in Poland; Michael R. Crowley, David K. Crossman and Bruce Korf of the Heflin Center for Genomic Sciences at UAB; Linlea Armstrong in the Department of Medical Genetics at University of British Columbia in Vancouver; Dusica Babovic-Vuksanovic in the Department of Medical Genetics at the Mayo Clinic College of Medicine in Rochester; Amanda Bergner and Jaishri Blakeley from the Johns Hopkins Comprehensive Neurofibromatosis Center; Andrea Blumenthal and Stephanie Hurst of the Lakeridge Health Corporation, Oshawa, Ontario, Canada; Molly Daniels and John Slopis at the MD Anderson Cancer Center in Houston; Howard Feit in the Department of Neurology at Henry Ford Hospital in Detroit; Kathy Gardner in the Department of Neurology at Veterans Affairs Hospital of Pittsburgh; Christine Kobelka and Pim Suwannarat from Kaiser Permanente Genetics in San Francisco; Chung Lee, Katherine Rauen and Andrea Zanko in the  Division of Medical Genetics at the University of California at San Francisco; and Rebecca Nagy and Judith Westman in the Division of Human Genetics at Ohio State University.

The research was supported by the Children’s Tumor Foundation, including a CTF Young Investigator Award to Piotrowski, and by internal funding from the UAB Medical Genomics Laboratory.