UAB circulation research paper is one of year’s top five 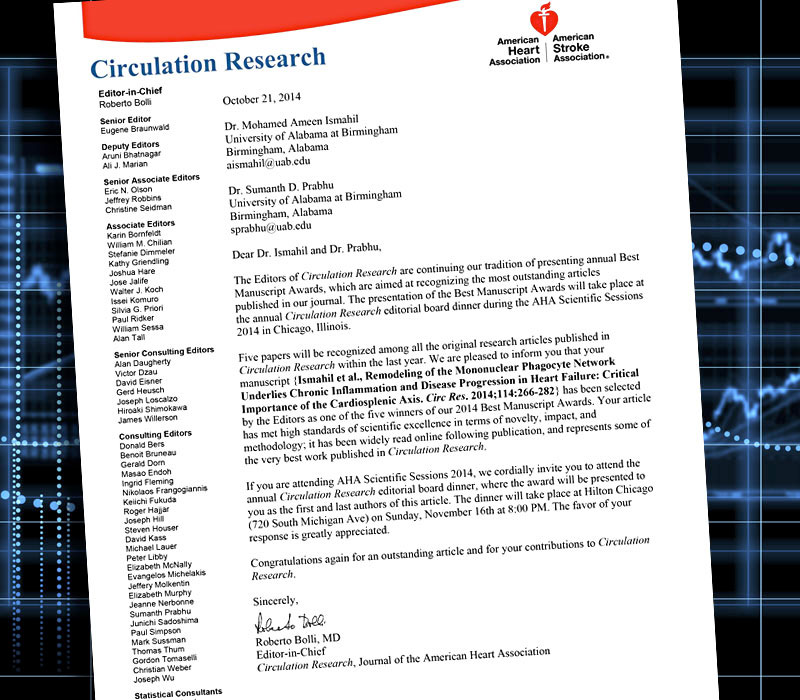 Click to enlarge the letter UAB School of Medicine researchers will receive awards from the journal Circulation Research for writing one of the five most outstanding papers of the past year.

Ameen Ismahil, Ph.D., and Sumanth Prabhu, M.D., of the Division of Cardiovascular Disease in the UAB Department of Medicine are the first and last authors of an article — published last January — that showed splenocytes are intricately involved in the heart failure that follows an infarction in a mouse-model system. One of their lines of evidence was that adoptive transfer of the heart-failure splenocytes into healthy mice led to systolic dysfunction and heart “remodeling,” the cardiovascular disease term for deleterious changes in shape, size and function.

Ismahil and Prabhu provided, “… exciting new evidence implicating the spleen in the immunoinflammatory response after myocardial infarction,” said Nikolaos Frangogiannis, M.D., Albert Einstein College of Medicine, in the accompanying editorial in Circulation Research. But the significance of such mouse research ultimately will depend on “whether the spleen significantly contributes to the inflammatory and remodeling responses in human patients,” Frangogiannis wrote. Indeed, the UAB team is in the initial stages of expanding the observations in mice to humans with ischemic heart failure.

While people can live without their spleen, the organ has several important roles. It keeps a reserve supply of blood and helps remove old red blood cells, and in a surprising 2009 mouse-model study, the spleen was found to act as a reservoir for proinflammatory monocytes after myocardial infarction.

The judges for Circulation Research’s 2014 Best Manuscript Awards looked for “high standards of scientific excellence in terms of novelty, impact and methodology,” said Roberto Bolli, M.D., editor-in-chief, in a letter to Ismahil and Prabhu. They also looked at the number of online downloads. Papers published between July 2013 and June 2014 were eligible for consideration.

Ismahil is a research associate in Cardiovascular Disease and Prabhu is the division chair and director of UAB’s Comprehensive Cardiovascular Center. Other authors on the paper, titled “Remodeling of the Mononuclear Phagocyte Network Underlies Chronic Inflammation and Disease Progression in Heart Failure: Critical Importance of the Cardiosplenic Axis,” are Tariq Hamid, Ph.D., Shyam Bansal, Ph.D., and Bindiya Patel, all in UAB’s Division of Cardiovascular Disease, and Justin Kingery, M.D., Ph.D., of the Department of Medicine, University of Louisville.

The awards will be given at the American Heart Association Scientific Sessions 2014, which meets Nov. 15-19 in Chicago. Read a previous UAB News story about the article here.