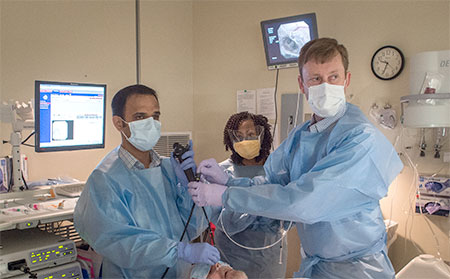 Surya Bhatt, left, and Mark Dransfield, right, from the Division of Pulmonary, Allergy and Critical Care Medicine, maneuver the valve into place with a bronchoscope.In late March, physicians at the University of Alabama at Birmingham carefully threaded a one-way valve the size of a black-eyed pea into the lower lobe of Dennis Bullock’s left lung. Bullock, a 67-year-old emphysema patient, was the fourth person at UAB to receive the experimental Zephyr® endobronchial valve.

In a minimally invasive procedure using a bronchoscope inserted in the airway, Bullock received four of the small, one-way valves, which are placed in the lungs to block airflow to diseased regions. The valves are either 4 millimeters or 5.5 millimeters in size.

UAB investigators are part of the LIBERATE Study, examining whether the one-way valves help improve lung function in patients with severe emphysema. It is one of several techniques being developed to reduce lung volume without surgery, which is effective but has risks for pulmonary or cardiac complications.

Emphysema, a lung disease usually caused by smoking, damages air sacs in the lung. The sacs fill with air that the body is unable to exhale, causing the lungs to expand. This in turn flattens the diaphragm, the primary muscle used for breathing. The flattened diaphragm is unable to function properly, making it extremely difficult for the individual to breathe.

“The idea behind all lung-volume-reduction procedures is to reduce the volume in the lung and allow the diaphragm to return to its normal shape and function,” said Mark Dransfield, M.D., associate professor in the Division of Pulmonary, Allergy and Critical Care Medicine and medical director of the UAB Lung Health Center. “We’re looking for a less invasive way to achieve that goal without the risks inherent in surgery.” 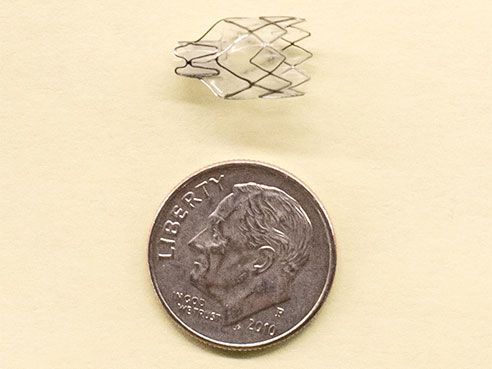 The one-way valves are small, either 4 or 5.5 millimeters.Bullock had pneumonia as a child and has suffered lung problems all his life. He was diagnosed with emphysema in his mid-40s, and the disease began to severely affect his life in 2012.“I couldn’t walk 100 feet without being exhausted,” said Bullock. “I’d always been active — ran a sawmill and the family farm. I couldn’t work, couldn’t travel.”


Bullock and his wife loved to travel, making frequent trips to Europe. He found he could not keep up with the tour group while others enjoyed the sites. He had watched his father die from emphysema, and when Dransfield suggested he might be a candidate for the experimental valves, Bullock was quick to sign up.

Implanting the valves is a fairly simple process. Bullock was awake but lightly sedated. Dransfield and Surya Bhatt, M.D., an assistant professor of pulmonary medicine, used a camera-equipped bronchoscope to select the appropriate locations for the valves. The procedure took about an hour, and Bullock remained in the hospital for a few days for observation. A week later, Bullock reported major improvement.

“It’s been life-changing,” he said. “I can walk around the house without tiring. They told me that X-rays showed my diaphragm had more room and was working better.”

He has had a few setbacks since then but still credits the valves with improving his lung function. Dransfield estimates that it will be another three or four months before he can determine just how much improvement the valves provide.

The procedure is not a cure for emphysema; but Dransfield says clinical studies in Europe have indicated the majority of patients see a significant improvement in lung function, exercise tolerance and quality of life. More than 25,000 Zephyr valves have been implanted outside the United States in the past 10 years. However, not all patients with severe emphysema are candidates for the study.

“Patients need to have enough healthy lung tissue so that the blockage of the most diseased and damaged areas and the reduced lung volume will allow the healthier areas to function more normally,” Dransfield said.

Results from the LIBERATE Study will be used as part of the submission seeking approval from the FDA for United States use.

Bullock cannot wait to get back on the road again.

“I used to go moose hunting in Newfoundland frequently, and I can’t wait to get back up there,” he said. “My wife and I want to visit Dracula’s castle in Transylvania, too. Maybe this time I won’t have to stay on the bus.”