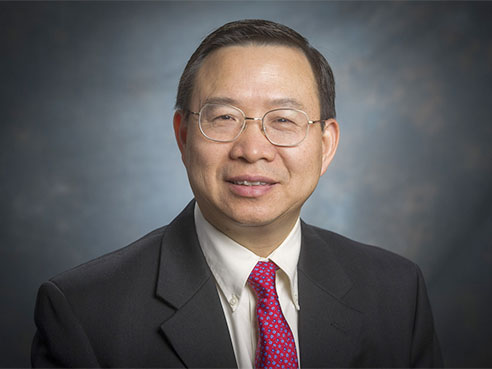 Long Zheng, M.D., Ph.D.A rare autoimmune disease creates sudden pain in the abdomen or the head, sending a patient to the emergency room with a potentially fatal condition. The pain comes from a multitude of blockages of tiny blood vessels, formed after the patient’s own immune system somehow inhibits an enzyme that is vital to control clotting.

The syndrome is called thrombotic thrombocytopenic purpura, or TTP, and treatment involves exchanging three to seven liters of plasma each day, at a cost of $10,000 a day. This costly care may continue for several weeks or months.

Long Zheng, M.D., Ph.D., the Robert B. Adams Endowed professor and director of the Division of Laboratory Medicine at the University of Alabama at Birmingham Department of Pathology, wants to create a faster and more effective treatment for these patients. This has led Zheng and colleagues to molecular-level studies of the antibody that inactivates a blood enzyme, called ADAMTS13. ADAMTS13 recognizes and cuts a blood adhesion protein called von Willebrand factor. The inhibition of ADAMTS13 activity by the antibody in TTP patients allows ultra-large von Willebrand factor to form disseminated microvascular clots.

The ability of ADAMTS13 to recognize von Willibrand factor is exquisitely sensitive, somewhat like a fan who goes to a football game with 50,000 people and yet recognizes his cousin out of all the faces in the crowd. Similarly, the ability of the autoimmune antibodies in a TTP patient to recognize and bind to the patient’s own ADAMTS13 enzyme is also exquisitely sensitive, picking only ADAMTS13 out of all the other possible “self” proteins in the body.

Learning the molecular details of these two recognition abilities will help Zheng subtly alter ADAMTS13, to produce a therapeutic enzyme that can elude recognition by the autoimmune antibodies, yet still retains its activity to cleave von Willebrand factor. Such an engineered enzyme could be given to TTP patients in the hospital to speed recovery and slash the cost of treatment.

In a paper published in the Proceedings of the National Academy of Sciences, “High Resolution Epitope Mapping by HX MS Reveals the Pathogenic Mechanism and a Possible Therapy for Autoimmune TTP Disease,” senior author Zheng and colleagues report on those molecular details. The results reveal, for the first time, the mechanism of the inhibition of ADAMTS13 by autoantibodies and suggest an avenue for therapeutic intervention.

The researchers found that five small loops in the protein’s amino acid sequence are necessary for the autoantibodies to bind to ADAMTS13. Cutting or substituting several amino acids out of any single one of the five loops prevented binding; furthermore, those small deletions in any single one of the five small loops also left the enzyme unable to cut von Willebrand factor.

“This was really surprising,” Zheng said. “It’s like a table with five legs. If you take one away, it should still stand, but somehow it collapsed. This suggests that you need the coordinated activity of all five.”

Thus, it appears that the autoimmune antibodies in TTP patients inhibit the enzyme by physically blocking the recognition site of ADAMTS13 for von Willebrand factor. More importantly, analysis of autoantibodies from 23 more TTP patients found that most use the same binding site, suggesting that a modified ADAMTS13 enzyme by protein engineering may be able to help a wide range of TTP patients.

The five years of research for this paper included the labs of Don L. Siegel, M.D., Ph.D., an expert in phage display, and S. Walter Englander, Ph.D., father of hydrogen exchange/mass spectrometry analysis to measure the protein-protein interaction regions of large proteins. Both Siegel and Englander are at the Perelman School of Medicine at the University of Pennsylvania, where Zheng used to work before moving to Birmingham.

The researchers first isolated messenger RNAs that code single chains of variable region of the monoclonal antibodies from B cells of patients with acquired TTP. They used a technique called phage display to select the messenger RNAs that code specific antibodies that bind and inhibit ADAMTS13. These monoclonal antibodies are then expressed in E. coli cells, purified, and biochemically characterized.

Of these, three inhibitory monoclonal antibodies were selected for further study by hydrogen-deuterium exchange coupled with mass spectrometry. This technology uses amine hydrogen (in H2O) exchange with deuterium (D2O) on each amino acid residue except proline. After reaction was stopped, the protein was then cut into small pieces (or peptide fragments) and run through HPLC for separation and mass spectrometry for identification. Antibody binding sites were detected by their ability to block the hydrogen and deuterium exchange, as compared with ADAMTS13 that was unbound.

One of the three high-affinity probes selected by phage display was used for the competition experiments against polyclonal autoimmune antibodies from 23 TTP patients. The results demonstrate that this particular binding epitope is common among patients with acquired autoimmune TTP.

Besides Zheng, co-authors are Veronica Casina, Wenbing Hu, Jianhua Mao, Rui-Nan Lu, Hayley Hanby, Brandy Pickens, Zhongyuan Kan, Woon Lim, Leland Mayne, Eric Ostertag, Stephen Kacir, Don Siegel and S. Walter Englander, all of the University of Pennsylvania. Zheng was recruited to UAB from the University of Pennsylvania in February and is the inaugural holder of the Robert B. Adams Endowed Professorship in Pathology in the UAB School of Medicine.