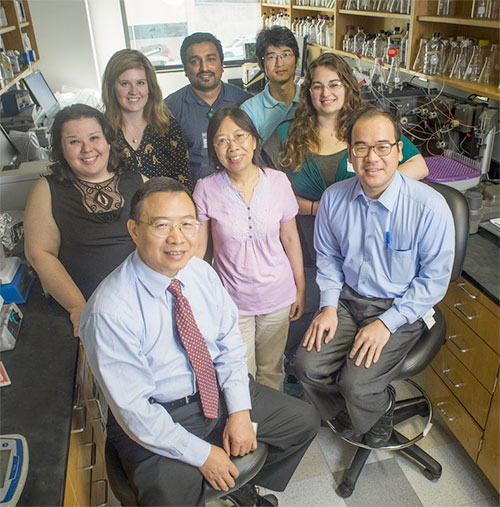 The lab team of Long Zheng, M.D., Ph.D., the Robert B. Adams Endowed professor and director of the Division of Laboratory Medicine in the Department of Pathology, who is seated, bottom left. Clockwise from Zheng, they are Catherine Zander, Ph.D., Jenny McDaniel, M.D., Vikram Pillai, Ph.D., Liang Zheng, Ph.D., Nicole Kocher, B.S., and Huy Pham, M.D., MPH. Standing in the center (pink shirt) is Wendy Cao, M.D., Ph.D.University of Alabama at Birminghamresearcher X. Long Zheng, M.D., Ph.D., has received a five-year, $2.5 million National Institutes of Health grant to study the pathogenesis of thrombotic microangiopathy, or TMA. In simple terms, this means looking for factors that cause or aid the onset of extensive microscopic clots in small blood vessels throughout the body. Though tiny, these spots can damage kidneys, heart and brain, and they can cause death.

“If you look at a tissue sample in the microscope,” said Zheng, the Robert B. Adams Endowed professor and director of the Division of Laboratory Medicine at the UAB Department of Pathology, “and see microthrombi — spots where the tissue is blocked from blood flow and red blood cells are sheared and ripped apart — it is called thrombotic microangiopathy.”

Most of the TMA cases result from three known categories of either internal or external causes. First are the deficiencies of the human enzyme ADAMTS13 that can cause the subset of TMA cases known as thrombotic thrombocytopenic purpura (TTP).

The second and third categories both cause a type of TMA known as hemolytic-uremic syndrome. A majority of these cases are caused by E. coli bacterial infection.

“Say you eat a hamburger that is not well-cooked and have diarrhea for a few days, and later have kidney failure,” Zheng said. “That is classic hemolytic-uremic syndrome.”

In hemolytic-uremic syndrome, the red blood cells break as they squeeze past the microscopic clots, and the debris clogs the filtering system of the kidney. A much smaller portion of hemolytic-uremic syndromes are caused by an innate immune system problem — dysregulation of the complement system, whose normal purpose is to help antibodies and white blood cells clear pathogens from the body.

Lastly, besides these three categories with known causes, there is another group of TMA cases that have no clear cause. The TMA may occur when there is some infection, after a bone marrow transplant, in some cancers, with certain drugs or during pregnancy.

Zheng and his UAB colleagues will look for the factors that cause TMA in patients where the cause is unknown, and they will look for factors that act as triggers in patients with known causes. They plan to get a sample of blood when patients appear in the emergency department, isolate the white blood cells, and do DNA and RNA sequencing. The goal is a total of 30 to 50 patients over five years. Gene expression can then be compared in the same patient when he or she goes into remission.

“We could find something really significant, and the collected data will provide a resource for future study,” Zheng said. One hypothesis is that some TTP patients who already have the ADAMTS13 deficiency will also show complement system activation as well. “They could play a synergistic role,” he said.

At the University of Pennsylvania, Zheng’s co-investigator Wenchao Song, Ph.D., will provide Zheng’s lab a mouse model that has complement dysfunction, which will then be bred with ADAMTS13-deficient mice to create mice with double hits, and see whether anti-complement antibody, eculizumab, is protective. About 80-90 percent of the grant funds will be spent at UAB.

Zheng and his UAB colleagues will also do DNA whole-genome sequencing of about 50 TTP patients. “Over the past 10 years at UAB,” Zheng said, “my colleagues have treated more than 100 patients with TTP, and about 80-90 percent survived. We can look at these patients’ DNA and RNA to learn something new.”

Zheng has assembled a team that includes physicians and nurses in Transfusion Medicine, the Emergency Department, and researchers in the Divisions of Laboratory Medicine and Informatics. It also includes five M.D./Ph.D. researchers in Zheng’s lab, with plans to hire more.