UAB’s Undiagnosed Diseases Program gives answers where there were none 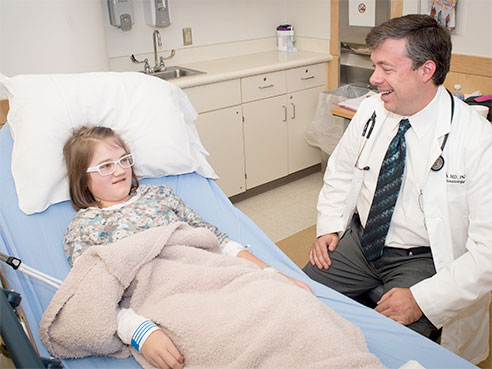 Mandalynn Smith and Dr. Robb Lowe share a laugh during Mandalynn's infusion at Children's of Alabama.Stephanie and Christopher Smith have been on a long, difficult and often frustrating journey to find answers for the mysterious health issues of their children. It started 24 years ago when their third child, Gage, was born. Gage, his younger brother Aiden and then sister Mandalynn, now 13, all developed mysterious symptoms that mystified doctors. All had severe inflammation of their joints, and delayed intellectual development. But no one knew why.

“We went to numerous physicians in Florida, South Carolina, Washington, D.C., and never got answers,” said Stephanie Smith. “They wrote “unknown bone disease” in the charts. We knew there was something dreadfully wrong with three of our five children, and no one could tell us what it was.”

Through luck, or fate, or divine providence, the family ended up in Boaz, Alabama. The children became patients of Children’s of Alabama and pediatric rheumatologist Robb Lowe, M.D., Ph.D., an assistant professor in the University of Alabama at Birmingham  Department of Pediatrics. Their timing was fortunate, because UAB had just created the Undiagnosed Diseases Program, a multidisciplinary effort aimed at unraveling the most perplexing medical cases that have defied diagnosis.

“We created the UDP to tackle cases where a diagnosis has not been made despite extensive efforts by physicians,” said Bruce Korf, M.D., Ph.D., director of the UDP and chair of the UAB Department of Genetics. “Some of these conditions may be so rare that only a handful of people in the world have them. Others may be more common, but have symptoms that present in an unusual way, making diagnosis difficult.”

Lowe referred the family to the UDP, which partnered with HudsonAlpha Institute for Biotechnology to employ a cutting-edge technique known as whole exome sequencing. The results of the sequencing revealed that all three siblings had two variants in a gene associated with mucolipidosis III, an inherited metabolic disorder known as a lysosomal storage disease.

Lysosomes are cellular structures that contain enzymes that break down large molecules in cells and recycle the remnants into products the cell can utilize. The three Smith children are missing the ability to package enzymes into the lysosome, so molecular material is not broken down and instead accumulates within the cells.

Lysosomal storage diseases are rare — mucolipidosis III especially so. The Smith’s are only aware of about 650 cases worldwide. Lowe found one scientific paper in the research literature, published in 2002. He had to self-educate.

“That one research paper discussed a drug in the bisphosphonate family called pamidronate, which has been used to treat bone diseases,” said Lowe. “The results were mixed in the previous study, but it was a starting place.”

Mandalynn began getting monthly infusions of pamidronate in the fall of 2015. Gage and Aiden may soon follow. The infusion takes about three hours. So far, Stephanie has seen benefits.

“It seems to lessen the pain in her legs and joints,” she said. “It should also reduce the risk of fracture. Mandalynn had a bad fall in a parking lot the other day and wasn’t injured.”

After the first infusion, Stephanie noted improvement in Mandalynn’s memory and ability to concentrate.

“Her teacher noticed it, too,” she said. “We’re not sure it will continue, but it’s encouraging.”

“We fortunately sometimes see unexpected beneficial effects for medications that have unexplained anti-inflammatory effects,” Lowe said. “In the case of pamidronate, pediatric rheumatologists have been using it “off-label” for over a decade to effectively a different rare bone disease called CRMO. Hopefully, knowledge of the underlying genetics will spur new research focusing on these poorly understood rare diseases.”

For Stephanie, finally knowing the name of this disease that has struck her children is important.

“It’s certainly somewhat overwhelming, but I’m grateful for the diagnosis,” she said. “After 24 years, we finally know what this is. We now know what to expect, what to look for and what to prepare for.”

“Every new diagnosis broadens our understanding of rare diseases,” said Korf. “Every therapy we try, whether it works or not, tells us something of the mechanisms by which these diseases operate. That’s the reason for the Undiagnosed Diseases Program and our collaboration with Children’s of Alabama and HudsonAlpha. The more we learn about rare genetic conditions, the closer we are to unlocking treatments that will have a meaningful impact on people’s lives.”

“This is not an ending point, this is a beginning,” said Lowe. “With a better understanding of the genetics involved, new medications such as biologics or even some of the older tried and true chemotherapy agents may prove to be very useful in treating rare and little understood conditions. The genetic data that we can now access will unlock that potential.”