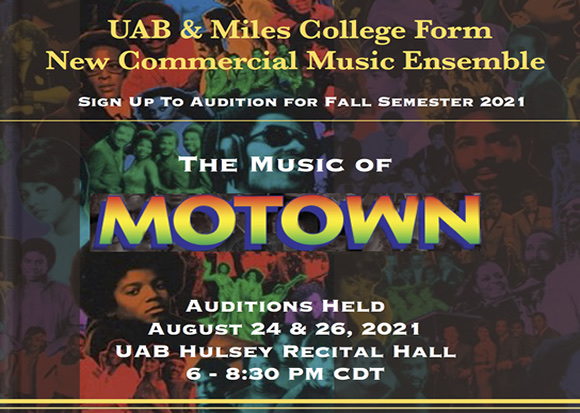 Music students at two Birmingham universities will have some impressive experiences to add to their resumes.

The departments of Music at the University of Alabama at Birmingham and Miles College have formed a partnership to offer their students a unique opportunity to study and perform together. They will also get the chance to work with noted composer and producer Henry Panion III, Ph.D., a University Professor in the UAB College of Arts and Sciences’ Department of Music and artistic director of the 2022 World Games, to be held in Birmingham.

Students from any major may audition if they are in good standing at either UAB or Miles. Auditions will be held Aug. 24 and 26. Students must register to audition; register online. Students must pass an audition and be chosen for the ensembles before being allowed to register for the course. The students will have access to a series of music industry-related courses and ensembles, including music technology, music business, and commercial and contemporary music ensembles.

In association with the World Games 2022, legendary musician Greg Phillinganes — a producer who has worked with Michael Jackson, Quincy Jones, Toto, Eric Clapton, Stevie Wonder and many more — has been appointed a visiting professor in music at both UAB and Miles, as well as a musical consultant for the World Games 2022 opening and closing ceremonies.

In this role, Phillinganes will work with UAB Commercial Music Ensemble Director Reginald Jackson, Ph.D., to assemble the group, which will be devoted to performing contemporary popular music in a broad range of styles, including R&B, pop, gospel, rock, country, and hip-hop.

The focus for this semester will be the music of Motown. Phillinganes has had an extensive career working for many of the artists associated with Motown and has appeared on many of the recordings produced for these artists, Panion says.

Each student placed in the ensemble will undergo an audition — like those held for placement in groups by the stars, including background vocalists and all instrumentalists. Auditions will be held for two keyboardists, drummer, percussionist, bassist, two guitarists, background singers, lead vocalists and a horn section (alto sax, tenor sax, trumpet, trombone and bari sax).

In addition to Phillinganes, the judges for this semester will be two Motown legends: the noted arranger and orchestrator of many of the most iconic songs of Motown, Paul Riser; and Martha Reeves of Martha Reeves and the Vandellas, known for “Dancing in the Street.”

“It is a rare opportunity for us to be able to partner in this fashion in such a meaningful way for our students and to have an opportunity to do so when the eyes of the world will be on Birmingham during the World Games,” Panion said. “This is an experience the students and all of us involved will remember and cherish for the rest of our lives.”