by Shannon Thomason
Choir favorites old and new will be performed at the show, along with two new scholarship announcements, one in memory of G. Labron Smith. 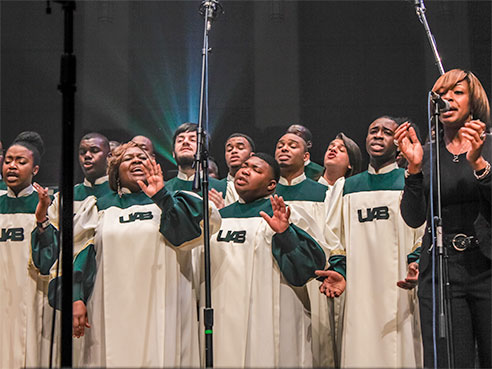 Music old and new is on the program as the University of Alabama at Birmingham Gospel Choir presents a concert celebrating its 19th anniversary.

Led by founder and director Kevin P. Turner, the choir will perform an unforgettable evening of music old and new. The night will feature music from the choir’s most recent CD release, “Nu-Soul City,” and from several other choir recordings. Requested favorites from years past are on the program too, include “Calling My Name” and “Anyway You Bless Me” by Hezekiah Walker.

Also, along with new music from gospel great Ricky Dillard, the Gospel Choir will perform its first-ever R&B remix single, “I’m Glad You Got Here!” The choir’s horn section is back with the band as well as the dance and mime team, choreographed by UAB student Miyoka Berry. Special guest artist Netra Young will perform, and the choir will remember two gospel greats with a tribute: local musical treasure the Rev. Bernard Williams Sr. and nationally known composer and musician Melvin Crispell.

Two new first-ever scholarships will be announced at the concert, Turner says. The first one is a UAB scholarship, the G. Labron Smith/UAB Gospel Choir Endowed Scholarship, for which the choir is raising money. The late G. LaBron Smith graduated from UAB with a bachelor’s degree in music. He was a featured vocalist on UAB Gospel Choir recordings and was the anchor character for the group’s acclaimed “Gospel Anthology II: The Church & Civil Rights” theatrical production and concert. Smith performed as a lead tenor in several operas and in 2014 was posthumously awarded the Distinguished Young Alumni Award from the UAB College of Arts and Sciences. A financial goal for this fundraiser is $25,000.

Part of the Department of Music in the UAB College of Arts and Sciences, the Gospel Choir is open to all students at UAB regardless of major. One credit hour is earned for participation, and the class is repeatable. Registration is required to participate.