by Shannon Thomason
Presented by the College of Arts and Sciences’ Department of Music, the UAB Piano Series brings the world’s finest pianists to Birmingham. Steven Lin will perform a program of works by Beethoven, Schumann, Mendelssohn, David Hertzberg and Ravel. 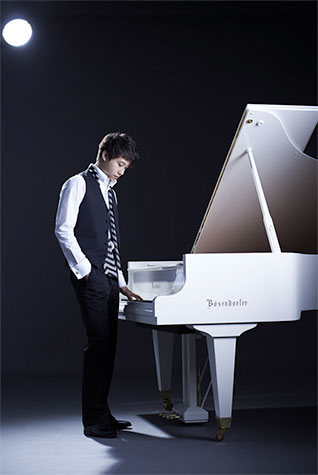 Pianist Steven Lin will perform a program of works by Beethoven, Schumann, Mendelssohn, David Hertzberg and Ravel on Sunday, Jan. 31, for the University of Alabama at Birmingham Piano Series.

Presented by the College of Arts and Sciences’ Department of Music, the UAB Piano Series brings the world’s finest pianists to Birmingham. Van Cliburn medal-winning pianist and artist-in-residence Professor of Piano Yakov Kasman directs the series.

Taiwanese-American pianist Lin is an immediately engaging and imaginative young artist, applauded by the New York Times for playing that is “… immaculately voiced and enhanced by admirable subtleties of shading and dynamics.”

His growing list of awards includes the 2012 Concert Artists Guild Victor Elmaleh Competition and the John Giordano Jury Chairman Discretionary Award at the 2013 Van Cliburn International Piano Competition. In May 2014, his dynamic playing at Israel’s Arthur Rubinstein Piano Competition was recognized when he was awarded the Silver Medal.

Lin began the 2015-16 season with summer performances at Korea’s DITTO Festival and The Finca World Piano Festival in the Canary Islands, and a concerto with the Fort Worth Symphony and Music Director Miguel Harth Bedoya. Plus, he is featured prominently in the Cliburn Competition documentary film “Virtuosity,” which premiered on PBS in July 2015. His featured U.S. recital engagements include his debut in Carnegie Hall’s Zankel Hall and the Wallis Annenberg Performing Arts Center in Beverly Hills. North American concerto highlights include three performances with the Kansas City Symphony and his debut in Carnegie Hall’s Stern Auditorium with the New York Youth Symphony, as well as appearances with the Denver Philharmonic, San Luis Obispo Symphony and the Montreal Chamber Orchestra.

Lin earned both bachelor’s and master’s degrees at The Juilliard School, studying with Robert McDonald and Matti Raekallio. He is currently pursuing a performance diploma at the Curtis Institute of Music, under the guidance of Robert McDonald.