by Shannon Thomason
The UAB Piano Series, presented by the College of Arts and Sciences’ Department of Music, brings the world’s finest pianists to Birmingham. Takács will perform an all-Beethoven program. 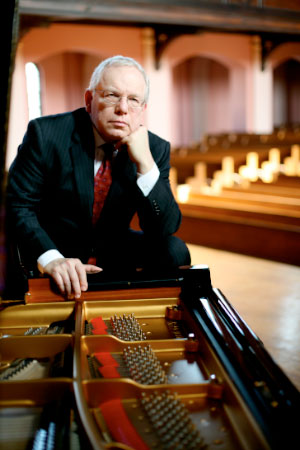 Pianist Peter Takács will perform an all-Beethoven program for his University of Alabama at Birmingham Piano Series performance, set for Sunday, March 13.

The UAB Piano Series, presented by the College of Arts and Sciences’ Department of Music, brings the world’s finest pianists to Birmingham. Professor of Piano and Artist-in-Residence Yakov Kasman, a Van Cliburn medalist, directs the series. Takács’ performance will close the 2015-2016 Piano Series; the next three-performance series will be announced in fall 2016.

Hailed by the New York Times as “a marvelous pianist,” Takács has performed widely, receiving critical and audience acclaim for his penetrating and communicative musical interpretations. Takács has received many prizes and awards for his performances, including First Prize in the William Kapell International Competition, the C.D. Jackson Award for Excellence in Chamber Music at the Tanglewood Music Center and a Solo Recitalist Grant from the National Endowment for the Arts.

Takács has performed as guest soloist with major orchestras in the U.S. and abroad, as well as at important summer festivals such as Tanglewood, Music Mountain, Chautauqua Institution, ARIA International, Schlern Music Festival in the Italian Alps, Tel Hai International Master Classes in Israel and Sweden’s Helsingborg Festival. He has performed and recorded the cycle of 32 Beethoven piano sonatas, which were released on the CAMBRIA label in 2011. Since 2008, he has been a member of the faculty at the Montecito Summer Music Festival in Santa Barbara, California.

Takács was born in Bucuresti, Romania, and started his musical studies before the age of 4, according to his bio. After his debut recital at 7 years old, he was a frequent recitalist in his native city until his parents’ request for emigration to the West, at which point all his studies and performances were banned. He continued studying clandestinely with his piano teacher until his family was finally allowed to leave for France, where, at age 14, he was admitted to the Conservatoire National de Paris.

Upon his arrival in the U.S., his outstanding musical talents continued to be recognized with full scholarships to Northwestern University and the University of Illinois, and a three-year fellowship for doctoral studies at the Peabody Conservatory, where he completed his artistic training with renowned pianist Leon Fleisher. Takács is professor of piano at Oberlin Conservatory.