by Shannon Thomason
The exhibition, presented by the UAB College of Arts and Sciences' Abroms-Engel Institute for the Visual Arts, opens Sept. 9 with a free reception.

Selected works from Cuban-born artist Luis Cruz Azaceta that explore the violence and injustice of our time will be on exhibition from Sept. 9-Dec. 17, at the University of Alabama at Birmingham.

“Luis Cruz Azaceta: War and Other Disasters” is presented by PNC with the UAB College of Arts and Sciences’ Abroms-Engel Institute for the Visual Arts. A free opening reception is planned 6-8 p.m. Friday, Sept. 9, at the AEIVA. This exhibition is part of a series highlighting Cuban art presented by the AEIVA.

Cruz Azaceta’s potent work fuses geometric abstraction with socially conscious neo-expressionism to explore the violence and injustice of our time. The exhibition includes a selection of 18 major canvases created between 2002 and 2016. Works on view cover topics ranging from the violence in Benghazi, Syria, and across the Middle East, to disasters closer to home such as Hurricane Katrina, the BP oil spill and the 9/11 World Trade tower attacks.

The exhibition will also include a selection of works on paper and a third gallery featuring a related sculptural installation, which will remain on view through Nov. 19.

Cruz Azaceta was born in Havana in 1942 and immigrated to the United States at the age of 18. During his youth in Cuba, he witnessed the violence of multiple regimes firsthand, which laid the groundwork for his sensitivity to social and political issues as an artist. 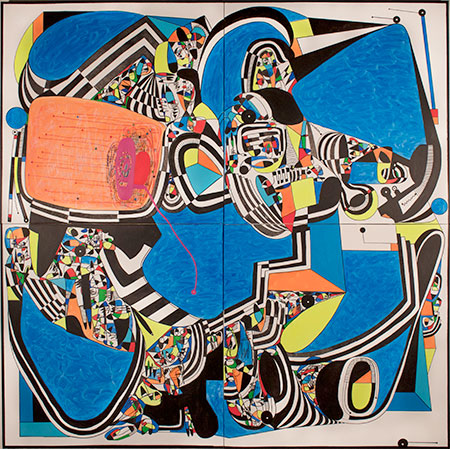 “The political and social themes present in Azaceta’s work pull heavily from the artist’s Cuban experience,” said John Fields, AEIVA curator. “Many of his paintings examine the violent and unjust acts he witnessed as a young man in Cuba.”

He studied art at the School of Visual Arts in New York City, and became known for his powerful neo-expressionist works in the 1970s and ʼ80s, with his first solo exhibition in New York City at the Allan Frumkin Gallery in 1975. Throughout the 1970s, ʼ80s and ʼ90s, his bold cartoon-influenced paintings, which chronicled both urban and international violence and injustice, often incorporated a wry wit. In 1992, he moved to New Orleans, where he has continued his prolific artistic practice.


“Azaceta’s stunning use of color and his cleverly executed geometric abstraction place him among the best painters of his generation,” Fields said. “It is rare for both the subject matter and technical mastery within an artist’s work to feel this urgent and vital.”

Cruz Azaceta’s work has been featured in more than 100 major exhibitions and is included in public collections internationally, including The Museum of Modern Art, The Metropolitan Museum of Art, The Whitney Museum of American Art and the Museo del Barrio, in New York City; the Museo de Bellas Artes, Caracas, Venezuela; Marco, Museo de Arte Contemporaneo de Monterrey, Mexico; and the Miami Art Museum, among other numerous venues. Cruz Azaceta has also been the recipient of numerous prestigious grants, including from the Pollack-Krasner Foundation, the Joan Mitchell Foundation, the National Endowment for the Arts and the Cintas Foundation. His AEIVA show was curated by Lisa Tamiris Becker.

Note: Lisa Tamiris Becker, the founding director of the Abroms-Engel Institute for the Visual Arts, passed away on July 29, 2016 after an illness. Under her leadership, AEIVA became a major cultural destination in just two short years and brought leading contemporary artists to UAB. She was extremely well respected by her fellow academicians, by her staff and AEIVA supporters, and by artists around the world with whom she had strong relationships. "War and Other Disasters" is the last show she curated at UAB and is a powerful coda to her prolific career. We are grateful for her vision, and we celebrate her lasting legacy.