Visiting artist Mehdi Saeedi to lecture on his typography practice Nov. 15 at UAB and work with graphic design students

by Shannon Thomason
Artist and designer Mehdi Saeedi will speak at 6 p.m. Nov. 15, in the AEIVA Hess Lecture Hall, and will work with graphic design students in the Department of Art and Art History. 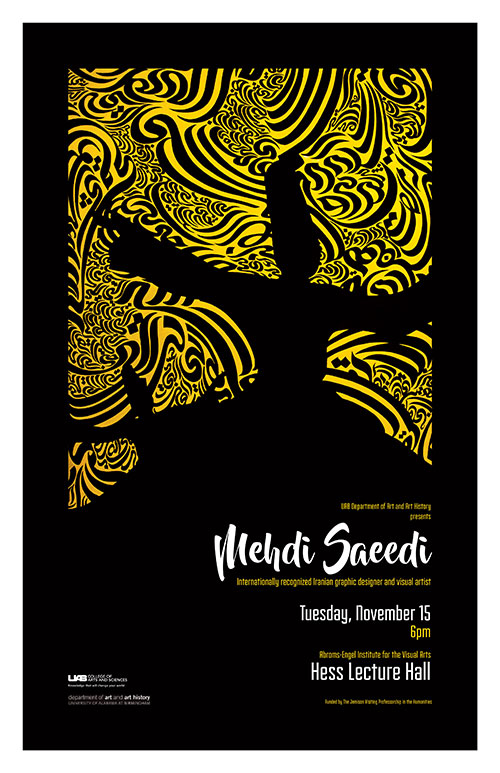 Visiting artist Mehdi Saeedi will speak on his practice in typography and calligraphy at the University of Alabama at Birmingham on Tuesday, Nov. 15.

Saeedi also will work with graphic design students in Professor of Graphic Design Erin Wright’s class during his visit, which is presented by the College of Arts and Sciences’ Department of Art and Art History.

He is set to speak at 6 p.m. in the CAS Abroms-Engel Institute for the Visual Arts, Hess Lecture Hall. The lecture is free and open to the public.

Saeedi‎ is an award-winning artist and designer based in Philadelphia who was born in Tehran, Iran. His aesthetics have become a mainstay of design in many regions, especially in those using the Persian and Arabic scripts as their alphabet. His special focus and proficiency in typography and calligraphy lead him to be an expert in the shaping of letters in forms and shapes (zoomorphic) in graphic design, according to his biography.

Saeedi has taught in Iranian universities and is a member of the Iranian Graphic Designers Society. He has held international workshops to bring the beauty of art and graphic design to those with different language backgrounds.

He has exhibited his works in more than 250 exhibitions and biennials worldwide, and has attended numerous local and international competitions as a jury member and speaker. Saeedi’s works have been exhibited at many major museums worldwide and are part of several prominent museum, public and private collections.

In 2013, he founded the first International Exhibition of Type Design, as part of Silver Cypress, the Third Biennial of the Iranian Graphic Designers Society. Saeedi‎ is included among 30 designers in the second edition of “New Masters of Poster Design,” which features the best poster designers currently working all over the world. His name is also listed in Meggs’ “History of Graphic Design.”

Saeedi is a part-time faculty member at Towson University in Maryland. Learn more about his work at www.mehdisaeedi.com.