by Meghan Davis
Stephen Carter will attend the Experimental Biology Conference in late March to receive his award. 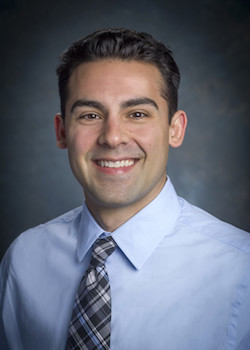 , Ph.D., postdoctoral fellow in the University of Alabama at Birmingham Department of Human Studies and the Nutrition Obesity Research Center, has been awarded the American Physiological Society’s Environmental and Exercise Physiology (EEP) section Partnership for Clean Competition New Investigator Award.

The award recognizes outstanding experimental research in environmental, exercise or thermal physiology by a postdoctoral fellow involving ergogenics and detection of performance-enhancing drugs or impact of training/environmental stress on hematological profiles. Carter will travel to the Experimental Biology Conference in late March in Boston to receive the award.

“It’s always a great feeling to be recognized for your work, but this award is truly special,” Carter said. “The Experimental Biology Conference is something I look forward to every year. It provides a wonderful setting to learn from respected researchers from around the world and a chance to foster new relationships.”

Carter is first author on an abstract, “Race Differences in Erythropoietin, 25-hydroxyvitamin D, and Hemoglobin Before and After Weight Loss in Women,” that is currently under review in the European Journal of Applied Physiology. Co-authors from the UAB schools of Education and Health Professions include Gary Hunter, Ph.D., Distinguished Professor of Kinesiology, Eric Plaisance, Ph.D., and Gordon Fisher, Ph.D., both assistant professors in kinesiology, Jose Fernandez, Ph.D., vice chair for education and professor in the Department of Nutrition Sciences, and Barbara Gower, Ph.D., vice chair for research and professor of nutrition sciences.

“This work has not only expanded my knowledge base but has really been a period of growth as a scientist,” Carter said. “I’m indebted to Dr. Gary Hunter, who has played a central role in my development and provided me with a fantastic opportunity to learn.”

Carter also has been accepted into a new mentoring program in the EEP and will be matched with Lisa Leon, Ph.D., an expert in inflammatory pathways that mediate organ damage, from the U.S. Army Research Institute of Environmental Medicine.

Carter plans to continue his research in cardiovascular physiology, expanding his focus into the reasons some breast-cancer survivors respond favorably to exercise for reducing persistent fatigue and others do not.