by Shannon Thomason
The BMEN Peer Mentoring Program is designed to provide academic and social support to black male students entering UAB. Brandon Cohill, Garrett Stephens and Samuel Sullivan IV were awarded the inaugural green blazers for 2016 at the Blazer Male Excellence Network’s Undugu Male Gathering.
As the year draws to a close, UAB News looks back at some of the top stories of 2016. See them all here. 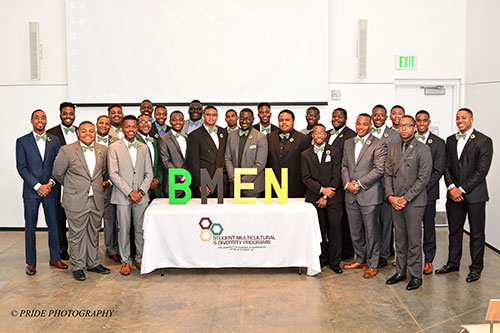 These student-mentors are selected each spring and go through extensive training to offer the best services possible.

Three worthy students have earned a new honor, awarded for the first time at the University of Alabama at Birmingham — the Green Blazer.

The BMEN Peer Mentoring Program is designed to provide academic and social support to black male students entering UAB. BMEN’s overall goal is to improve the quality of life for a new student by partnering him with a returning student, and by staff’s providing information on navigating the collegiate experience inside and outside of the classroom. The student-mentors are selected each spring and go through extensive training to offer the best services possible. Faculty and staff members and professionals from the community are invited to work with the group.

Students who excel in the classroom, campus and community may earn the blazers. These students are BMEN leaders, active in campus organizations, leaders in the community and highly respected by their peers, says Mentor Programs Coordinator Sharifa Wip of UAB’s Student Multicultural and Diversity Program.

The Undugu program has been envisioned for some time, says Christopher Jones, director of UAB’s Student Multicultural and Diversity Program.

“It is important that we use this program to highlight the accomplishments and efforts of black men on campus and in the Birmingham community,” Jones said. “This in turn will help counter the harmful narrative surrounding black men, as well as inspire other black men to strive for excellence.”

At the gathering, Eric Jack, Ph.D., dean of the UAB Collat School of Business, and Marcus Carson, MBA, of Growing Kings were awarded the “BMEN Award of Excellence” for their support of black men on campus and in the community. The program’s fall 2015 and spring 2016 graduates were honored with framed certificates and graduation stoles, respectively. Students on the president’s and dean’s lists for academics also were honored.

Stephens, 22, of Opelika, will graduate in April with a degree in political science, with minors in criminal justice and international studies. Lead mentor with BMEN, he is also president of the Undergraduate Student Government Association. A member of the political science honor society Pi Sigma Alpha, he was also awarded the Student Impact Award at UAB’s Student Excellence Awards in 2015, an award that goes to the student who had the greatest impact on UAB’s campus during that academic year. 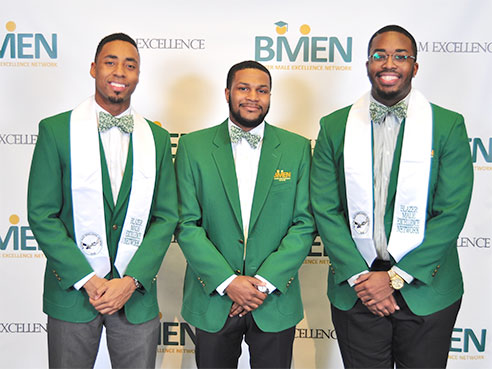 From left: Garrett Stephens, Samuel Sullivan IV and Brandon CohillThe greatest benefit of BMEN for Stephens has been the opportunity to help incoming students, and ultimately to see them walk across the stage at graduation will be the greatest reward. Being awarded the Green Blazer has been the pinnacle of his time at UAB so far, he says.

“It encourages me to continue this work, because it shows me that what I have done has had a profound effect on the program and the young men who are in the network,” Stephens said.

Cohill, 23, of Birmingham, will graduate in April with a degree in nuclear medicine technology. Cohill has been an orientation leader, deputy chief of staff of Communications for the Undergraduate Student Government Association, USGA senator for the School of Health Professions, and vice president and president of the Iota Nu Chapter of Alpha Phi Alpha Fraternity, Inc. The recognition he received from BMEN inspired him to push through his final semester of his undergraduate career, he says.

“The greatest benefit BMEN has offered me was the opportunity to give back to other male students and a sense of brotherhood through networking opportunities with current and past members,” Cohill said. “Receiving my BMEN graduation stole is a moment that I have worked for since I joined the network. I guess you can say it is a dream come true.”

Sullivan, 20, is a junior accounting major and a first-generation college student from Pleasant Grove. Sullivan holds leadership roles in both the Eta Beta Chapter of Phi Sigma Pi National Honor Fraternity and Alpha Kappa Psi Business Fraternity, is a member of the Golden Key International Honour Society, and is in the Business Honors Program in the Collat School of Business. He is a recipient of the Rime Endowed Scholarship from the Collat School of Business and an academic Collegiate Honors scholarship. He became involved in service projects for Renew Our Rivers and Habitat for Humanity in his time at UAB.

BMEN has offered Sullivan a sense of belonging, he says.

“I didn’t come into UAB with a lot of friends; but through the BMEN community and network, I have met and hold very valuable relationships with people I would not know otherwise,” Sullivan said. “That was big for me because feeling that I belonged here at UAB made me want to work even harder to accomplish the mission I set for myself.”

The recognition from BMEN was amazing and humbling, he says.

“I always thought that I was just like everyone else and that what I was doing was natural. To know that what I was doing has inspired others and set a new standard was unbelievable,” Sullivan said. “Now that I’ve received the honor of receiving a green jacket, I hope to continue to make a difference in my final year of undergrad.”

All three students had powerful advice for other young men considering college.

“My advice to other young men considering college is to never give up,” Cohill said. “As a freshman in college, you are given a blank canvas to create your own story. There will be plenty of nights when you want to give up, but I promise that extra hour of studying the night before an exam will be worth it.”

“There will be tough times during the process, but the end results are truly worth it,” Stephens said. “The advice that I got when I was a freshman mentee in the program was that ‘your network determines your net worth.’ This has stuck with me during the entirety of my time at UAB. Networking is truly important to success while in college and out in the real world.”

“My advice to other young men is this: There is no substitution for an education,” Sullivan said. “I can truly say that my parents pushed me to get here, and now that I’m here, I haven’t looked back. The things that I’ve learned here both in the classroom and outside of it are priceless to me. If you have the chance to go to college, do it.”