by Bob Shepard
UAB trauma surgeons support Stop the Bleed, a campaign to provide knowledge and equipment to the public in response to mass casualty events for use before EMS crews can arrive. 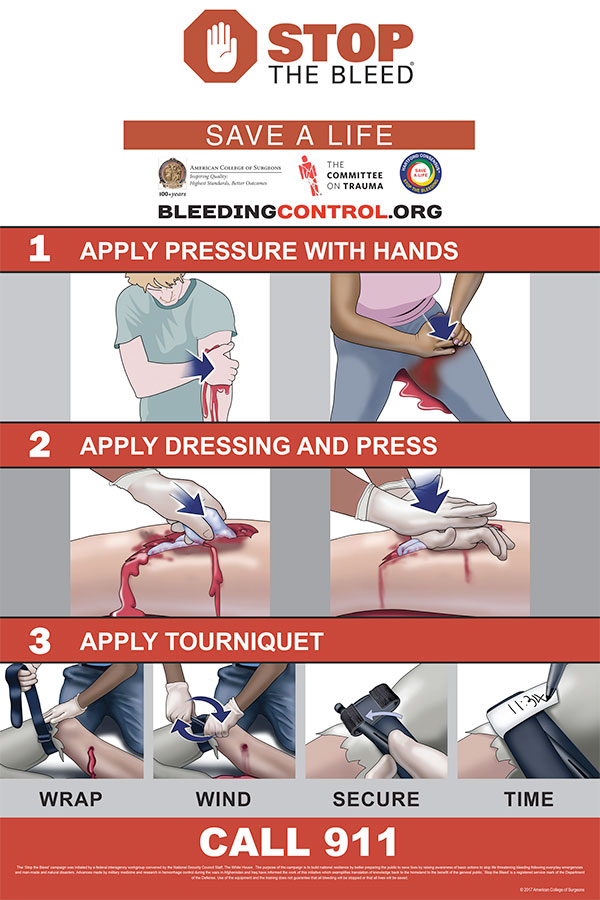 As horrible as any mass shooting event is, University of Alabama at Birmingham trauma surgeon Jeff Kerby says what really bothers him is that some of those who die could have been saved with timely medical care.

“In events such as the shootings at the Pulse nightclub, in San Bernardino or Sandy Hook, we know that, in some cases, shooting victims bled out and died before first responders could arrive to perform emergency medical treatment,” said Kerby, M.D., Ph.D., director of the UAB Division of Acute Care Surgery in the School of Medicine. “With shooting scenes on lockdown and shooters still on the loose or unaccounted for, there is all too often a delay in emergency personnel’s reaching the injured.”

The American College of Surgeons and Hartford Consensus have launched an awareness campaign to provide the general public with the knowledge and tools to respond quickly in the event of an emergency, even before trained professionals can arrive. The program, Stop the Bleed, is modeled after the very successful efforts to place AEDs — automated external defibrillators — in public places.

“We are advocating that trauma kits, containing instructions, tourniquets, gauze and gloves, be located at public places such as courtrooms or schools, and that the public become educated in their use — much as we’ve seen with the placement of AEDs and an increased emphasis on the public’s learning CPR,” Kerby said.

The Stop the Bleed website, www.bleedingcontrol.org, calls on the public to learn proper bleeding-control techniques, including how to use their hands, dressings and tourniquets, through diagrams, news, videos and other resources. Kerby says staff from the UAB trauma service would assist with training locally.

Stop the Bleed points out that bleeding victims can quickly die from uncontrolled bleeding, as soon as five or 10 minutes after injury.

“In a workplace or school shooting, for example, we tell people to lock their doors and wait for an all-clear from police; but if you’ve got an injured person in the room with you, that all-clear may come much too late for them,” Kerby said. “If the survivors in the room are prepared and equipped to respond, they may be able to keep a victim alive until other resources are available.”

Gun violence has increased at an alarming rate, Kerby says, in both Alabama and the nation. Appropriate trauma kits, costing about $60, are commercially available. The next steps, he says, are to get buy-in from community leaders and begin educating the public before the next shooting event occurs.