by Alicia Rohan
Leaders in HIV research and treatment gather at UAB to address laws that prohibit gay men from donating blood. 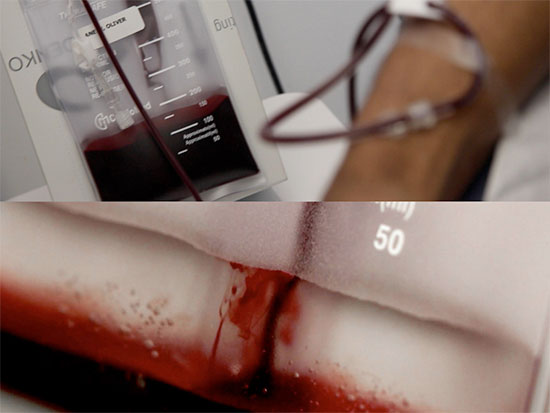 From "One in Our Blood: Blood Equality." Credit: Leo Herrera, video stills from "Blood Mirror 1," 2015Emerging data establishes that it is safe for all individuals who have not had unprotected sex with a person of unknown HIV status in the last 14 days to donate blood regardless of sexual practice. The University of Alabama at Birmingham School of Medicine will host the Blood Equality Medical Advisory Board Meeting on Thursday, Oct. 19, to address this discrepency between scientific fact and public policy.

The advisory board will evaluate changes to rules that exclude gay men from donating blood in the United States. Peter Marks, M.D., Ph.D., executive director of the FDA Center for Biologics Evaluation and Research, the division that oversees blood donation policy, will lead the discussion, alongside prominent medical leaders and experts in the study of blood donation, including members of the American Red Cross Blood Bank and experts in HIV epidemiology and treatment.

A law passed in 1983 excluded gay men from donating blood due to existing knowledge of AIDS and how it may be transmitted.

“Since this law was passed, we have learned so much more about HIV/AIDS and how it is transmitted, making these initial rules obsolete,” said Michael S. Saag, M.D., Jim Straley Endowed Chair in AIDS Research at UAB. “Continuing to operate under these outdated rules causes harm to the U.S.’s blood supply in many ways, including shortages of certain blood products. The policy is discriminatory, restricting blood donation based simply on an individual’s sexual practice.”

Current laws restrict donors who could contribute blood and blood products safely to the United States’ blood supply. Even when blood is in adequate supply, subgroup populations, such as racial groups, cannot readily receive donated blood without risk for reactions due to subclinical mismatches.

“Individuals who are not gay men but have had a recent potential exposure to HIV can just as readily transmit HIV via blood donation as a gay man with similar recent exposure,” Saag said. “The advisory board hopes to change current laws to put an end to blood inequality moving forward.”

UAB has longstanding efforts in HIV research, treatment and policy development. The UAB 1917 Clinic continues to make an impact in the HIV epidemic in the Deep South. Recently, with leadership from the UAB Center for AIDS Research,  Birmingham became one of 13 cities to sign the Paris Declaration, dedicating resources to eliminating the spread of AIDS by 2030.