by Bob Shepard
This new, non-invasive way to deliver radiation has helped one Alabama man complete optometry school and launch his new career. 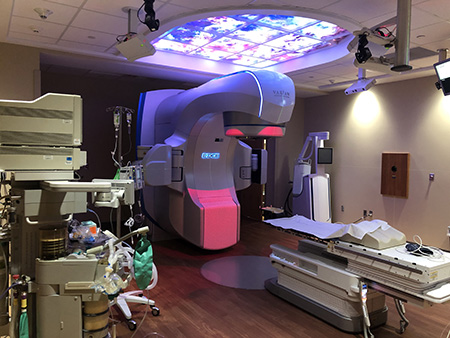 UAB is the first program in the United States to use the Varian Edge®️ radiosurgery system and the virtual cone technology for functional SRS on movement disorder patients.Tyrus Agee thought his promising new career was doomed. He had only one year left to finish his Doctor of Optometry degree at the University of Alabama at Birmingham School of Optometry. He had passed all the academic requirements and just needed to demonstrate his clinical proficiency.

But he couldn’t stop his hands from shaking.

“I wasn’t overly stressed or nervous, but my hands shook,” said Agee. “I couldn’t complete an eye examination because I couldn’t hold my hands still to operate the diagnostic instruments.”

Ultimately, Agee was diagnosed with essential tremor, a movement disorder that causes involuntary, rhythmic shaking, especially in the hands. A New Orleans native who finished his undergraduate degree at UAB after Hurricane Katrina, he took a year off from optometry school for treatment. There are three medications usually prescribed for essential tremor and Agee tried all three. The tremor improved, but the side effects were unworkable. He couldn’t concentrate or stay alert.

“The medications left me in a mental haze totally unsuitable for an optometrist,” he said.

The next option considered was DBS, or deep brain stimulation. This surgical procedure is extensively used to control abnormal movements by placing electrodes in the brain to modulate brain activity. While it is extremely effective in controlling tremor, it is invasive. Then a relative who worked in UAB’s Department of Radiation Oncology in the School of Medicine, told him about another, newer option. One that is only available at UAB.

It is a new take on an existing technique called stereotactic radiosurgical thalamotomy, or SRS. The standard SRS thalamotomy uses a radiation-delivering device called a Gamma Knife, which delivers aimed beams of radiation to a precise point in the brain, targeting the spot which triggers the tremor while minimizing damage to surrounding tissue. 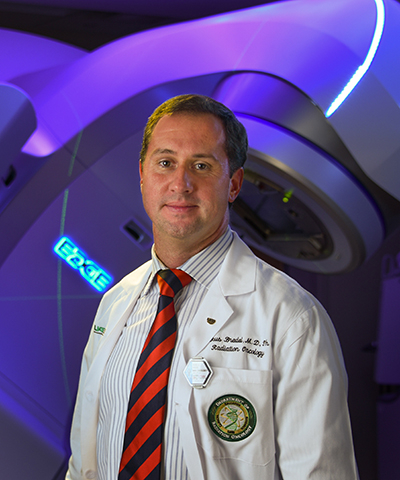 Markus Bredel, M.D., Ph.D., UAB Dept. of Radiation OncologyThe down side to a Gamma Knife procedure is that a patient has a frame attached to their skull to aid in the aiming of the radiation beams. This frame is drilled into the skull and can cause discomfort. The beams are delivered through small openings in a large, helmet-like device placed over the patient’s head. It is cumbersome, complicated and uncomfortable.

“Each beam of radiation takes a different vector through the collimator helmet until they come together at the site where the tremor originates,” said Markus Bredel, M.D., Ph.D., professor of radiation oncology and the Sharon A. Spencer Distinguished Endowed Chair in Translational Radiation Oncology at UAB. “We’ve improved on that process by creating a “virtual cone” technique using a new, non-invasive linear accelerator called the Varian Edge®. It replaces the frames and physical cones with non-invasive image-guided techniques that deliver radiation with extreme accuracy and improve the overall patient experience.”

Bredel says the UAB Advanced Stereotactic Radiosurgery Program for Movement Disorders is the first program in the United States to use the Varian Edge® radiosurgery system and the virtual cone technology for functional SRS on movement disorder patients, such as essential tremor or tremor-dominant Parkinson’s patients.

“Advanced structural and functional brain magnetic resonance imaging allows us to better pinpoint the area in the brain that is potentially responsible for the tremor,” Bredel said. “The virtual cone SRS procedure delivers the right amount of radiation to create a tiny lesion at that spot, which eliminates or reduces the tremor. Tremor is reduced significantly in 80 to 85 percent of patients.”

Patients such as Agee. His tremor was worse in his left hand, so Bredel, in collaboration with Barton Guthrie, M.D., professor of neurosurgery at UAB and surgical director of the Functional and Stereotactic Neurosurgical Program, treated the right side of his brain in the summer of 2018.

“My left hand is steady as a rock now,” Agee said. “My right hand, which wasn’t as affected, has remained stable.”

Overall his tremor has improved enough that Agee returned to school and graduated on May 10, 2019. 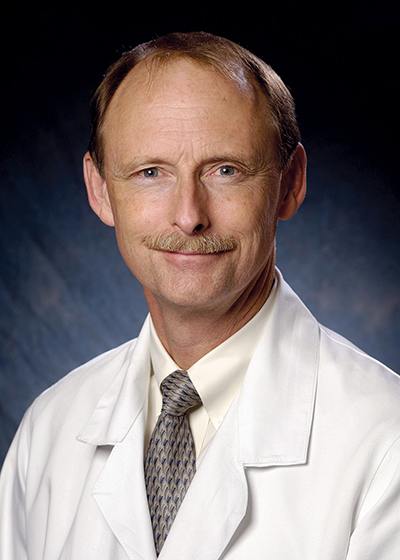 Barton Guthrie, M.D., UAB Dept. of NeurosurgeryGuthrie says for appropriately selected patients, radiosurgical thalamotomy can be an alternative to deep brain stimulation, which has impressive results. UAB neurosurgeons have done more than 1,000 DBS procedures for conditions such as tremor, Parkinson’s disease and recently, epilepsy.

“There are patients who, due to various medical or surgical reasons, are not candidates for DBS, and some patients do not wish to undergo the awake surgery required for precise DBS lead placement or may object to carrying an implanted device, much like a heart pacemaker,” Guthrie said. “Our early results with this technology indicate that it can be a viable option for those patients and can have very good outcomes with a low probability of undesirable side effects.”

Bredel says patients are treated under conscious sedation and the treatment can often be completed in 30 minutes of beam-on time. Gamma Knife procedures usually require 2-3 hours.

Bredel says as many as 10 million people in America have essential tremor, which usually occurs independently of other conditions but tends to run in families. While there may be a genetic link, as Agee suspects in his case, there is usually no known cause. Another 7-10 million people worldwide have tremor associated with Parkinson’s disease.

UAB is conducting a clinical trial of the new procedure although patients do not have to enroll in the trial to be candidates for the procedure.

“We use sophisticated MR imaging in the trial to better understand the locus of the tremor in each individual,” said Bredel. “It’s a precision medicine approach and we are striving to be able to assess each individual patient’s brain regarding functional connectivity that is potentially involved in their tremor rather than use estimates based on our knowledge of thousands of prior cases. The study uses MR imaging in the Civitan International Neuroimaging Laboratory here at UAB and in collaboration with colleagues at Auburn University MRI Research Center and the Division of Neuroradiology at Mayo Clinic Jacksonville.” 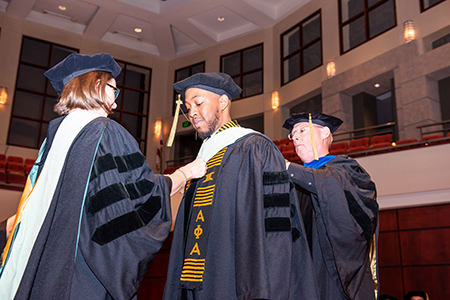 “Our strong collaboration and interaction with our movement disorder specialists and functional neurosurgeons here at UAB is critically important and a major factor for the success of this program” he said.

With his essential tremor now controlled, Agee starts work at an optometry practice in Huntsville this summer.

“Without this procedure, I would not have been able to complete optometry school and begin my new career,” he said. “They said it would take 10 weeks to see improvement, but I saw results almost immediately.”