by Bob Shepard
Birmingham’s professional soccer team, Legion FC, is gearing up for the 2020 season, and UAB Sports Medicine is there to keep them healthy and on the field. 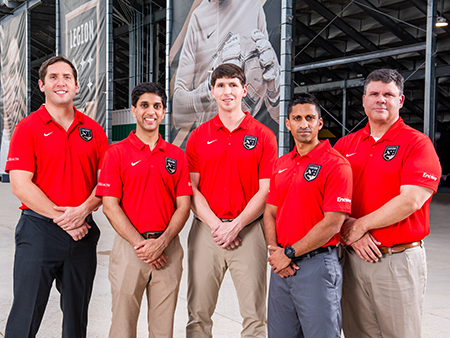 Physicals for professional athletes are fundamentally the same as for most other athletes, with some major differences.

“In orthopaedics, we do a general exam looking at joint health, stability, flexibility and strength,” said UAB orthopaedic surgeon Amit Momaya, M.D. “We are very interested in ways to minimize common injuries to soccer players, such as hamstring or joint injuries.”

Momaya says they use a device called the Nordbord hamstring testing system to gauge hamstring strength and potential imbalance.

“We can modify an athlete’s training regimen based on the risk profile and tailor preseason workouts to reduce the risk of hamstring injuries,” Momaya said.

The sports medicine team is also working with physical therapists to measure the landing forces on the athlete’s legs and joints.

“We’re trying to learn more about the forces sustained through the legs and the potential for injury,” Momaya said. “We’re looking at the symmetry of force on each leg, to see if there are differences and, if so, to see if we can suggest workouts to balance those forces.”

The sports medicine team is also trying to protect athletes by making sure that their hearts are safe. Irfan Asif, M.D., the chair of the UAB Department of Family Medicine, spearheads that effort.

“We conduct EKG screens on each athlete to detect any potential heart problems,” Asif said. “Heart issues are the leading cause of death among young athletes on the playing field, and there are usually no symptoms or warning of an impending problem.”

The overall goal of the physicals is to reduce injury risk and improve performance in the athletes.

“We’re thrilled we are able to provide our medical services to Legion FC,” Asif said. “We want to keep them on the field, playing at an elite level.” 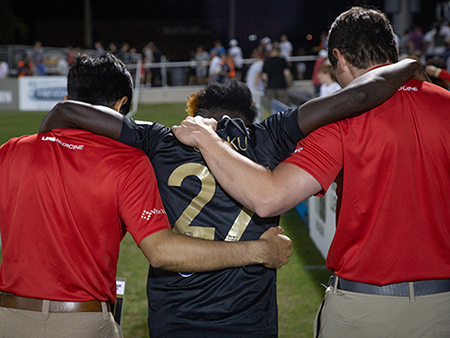 Birmingham’s professional soccer team, Legion FC, is gearing up for the 2020 season, and UAB Sports Medicine is there to keep them healthy and on the field.The USL Championship is one of the most prominent Division II professional soccer leagues in the world, with 36 clubs representing the United States and Canada. In total, the USL reaches a population of 75 million people, fueling the growth of professional soccer across North America.

The clinic provides a broad range of care including non-surgical evaluation to surgical management of complex injuries. Athletes are treated in a comprehensive fashion, with the goal of allowing them to return safely and as soon as possible to activity. Further, in-clinic access to radiology and ultrasound broadens the capabilities for athlete care. With the backing of resources from both UAB and Children’s Hospital, the clinic provides state-of-the-art care, continually evolving through ongoing research. Appointments for Orthopaedic Sports Medicine can be made at 205-930-8339 and for Family & Sports Medicine at 205-934-9700.

Information on Birmingham Legion FC — including advance ticket sales and merchandise — can be accessed online here at BHMLegion.com. Download the Legion FC app or follow the Legion on Instagram, Twitter and Facebook (@BHMLegion) for more information.
Hashtag: #HammerDown. The 2020 season begins with an exhibition game Feb. 8 and the season opener March 15.