by Tyler Greer
Recruitment for the trial continues as Myers discusses the benefits she received from participating and the knowledge she has gained to take control of her health care.
As the year draws to a close, UAB News looks back at some of the top stories of 2016. See them all here.


In November 2014, right about the time Birmingham resident Joy Myers was in an induced coma at an area hospital, the University of Alabama at Birmingham was on the verge of a clinical trial announcement that would bring Myers and UAB’s Comprehensive Diabetes Center together just a few weeks later.

The announcement of the $2.1 million, JDRF-funded “repurposing of verapamil as a beta cell survival therapy in type 1 diabetes” was picked up around the world as the news was promising — UAB research had shown the common blood pressure drug verapamil completely reversed diabetes in mice by lowering TXNIP levels in beta cells. With the first clinical trial to test whether it could do the same in humans just a few weeks away, Myers would become one of the first participants to take part in the potentially groundbreaking endeavor after doctors determined her body was in ketoacidosis brought on by type 1 diabetes.

Myers recovered and recently wrapped up her yearlong participation in the blinded clinical trial; neither Myers nor her UAB doctors know yet whether she had the verapamil or the placebo. But those who do partake in the trial do receive a verapamil prescription upon the completion of their study.

“The trial has really made this first year plus very special in a way,” Myers said. “It provided me with the tools that I need to manage my diabetes. I wouldn’t have had this type of educational opportunity without this trial. I’ve been taught a lot, and I’ve learned how to live with diabetes and how to manage it.”

The UAB verapamil-diabetes clinical trial aims to enroll 52 participants between the ages of 19 and 45. Anyone diagnosed with type 1 diabetes is encouraged to contact UAB within three months of their diagnosis at T1DM@uab.edu or 205-934-4122 to see whether they qualify for the study.

More participants for the trial are needed. One of the more difficult aspects of finding enrollees for the trial is that many physicians immediately think adults who show diabetic symptoms are likely type 2 diabetics, says Fernando Ovalle, M.D., director of UAB’s Comprehensive Diabetes Clinic and co-principal investigator of the verapamil trial.

“Physicians and clinicians in general need to be mindful that, when someone comes to their clinic at any age — 20, 50 or 80 — if they’re relatively lean with a body mass index less than 30 and they present with diabetes, it’s probably not type 2 diabetes. It’s most likely type 1 diabetes,” Ovalle said. 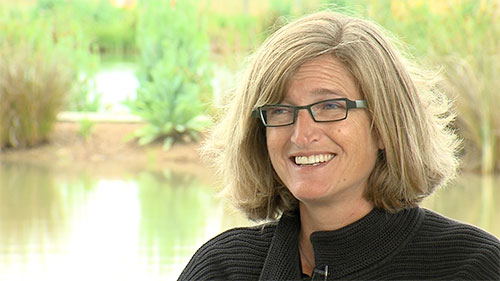 "I didn’t have a primary care physician. If you don’t have that person who is doing a yearly check on you and monitoring you and your history, maybe he or she could have prevented an emergency situation. It might have kept me from going into ketoacidosis. If I had been able to go to a primary care doctor and run some blood work, it might have been picked up sooner.”Ovalle attributes this confusion to a lack of good epidemiologic data available in the United States to give an exact frequency of type 1 versus type 2 diabetes. Ovalle says, in his clinic, approximately 25 percent of adult patients who come to see him with a diagnosis of type 2 diabetes actually have type 1. “I’m not saying 25 percent of the overall adult population who present with type 2 actually have type 1, but it’s not 5 percent as many believe,” Ovalle said. “It’s probably closer to 10 to 15 percent of adults who have type 1 instead of type 2, and that’s actually a big difference. That’s closer to one in 7 patients as opposed to one in 20 patients.”

Ovalle says when type 1 diabetes presents in adults, it may do it a bit more slowly. These patients may not need insulin right away — though they will need it sooner rather than later, Ovalle cautions — and don’t present with a crisis as is typical with children.

“These patients may present with symptoms including going to the restroom more, drinking more water than normal for them and losing weight,” Ovalle said. “We really should suspect type 1 in anyone who is lean and develops diabetes as an adult.”

Myers fits all the criteria Ovalle mentions except one — it took an emergency for her to discover that she had type 1 diabetes, and she wonders whether she could have prevented it.

Myers had no primary care physician at the time she became sick. She does not remember the last time she had had a yearly checkup prior to the incident. Simply put, Myers became a victim of life. Family, work, the basic need to get things done and the fact that she believed she was in good health led to her to forgo the need for a primary care physician.

“Prior to getting ill, I was in a place where it was all about moving forward and maintaining my household, my job and trying to get everything done,” Myers said. “I think women especially are guilty of trying to be all for everyone, especially when you’re a working mom. And I didn’t have a primary care physician. I think that’s a regret that I have and a piece of advice I give to people. If you don’t have that person who is doing a yearly check on you and monitoring you and your history, maybe he or she could have prevented an emergency situation. It might have kept me from going into ketoacidosis. If I had been able to go to a primary care doctor and run some blood work, it might have been picked up sooner.”

A diabetes diagnosis has forced Myers to take charge of her health. The education she has received has been a benefit. And the support she has received from her husband, Matthew, and son, James, has also made a difference in learning to live with the disease.

The family stays on a pretty set schedule so she can check her blood and eat at certain times. They’ve also learned that it’s important to ramp up their exercise and not overdo it right out of the gate.

“Joy has really handled everything extremely well,” Matthew said. “Diabetes is not the end of the world if you just manage it. Being here in Birmingham has been a godsend. UAB is a teaching school, and having the opportunity to take part in this verapamil study has helped her tremendously. The study has given her the tools, the education and, I feel, the hope for us as a family to not be freaked out by it all and know it can be managed.”

“The trial has been important to me because of what it’s provided me in terms of education, but it’s also an important science experiment,” Joy said. “Beyond just the life changes, it gave it a purpose to try to be good and manage the diabetes and do what I need on a daily basis. But it also gives you hope. If not for me, then hopefully in the very near future, we’ll be closer to figuring out this disease and how people can live with it even better or, hopefully, without it at all.”