UAB was the only college Kendall Curtis applied to

by Jeff Hansen
This week, the UAB junior will travel to a D.C. conference and tell U.S. Sen. Richard Shelby about her research on Alzheimer’s disease. 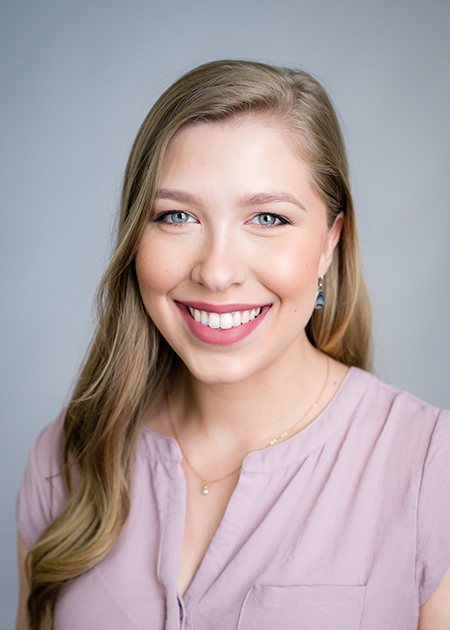 Two of the three best choices Kendall Curtis has made in her life occurred at the University of Alabama at Birmingham. First was her decision to join the Science and Technology Honors Program in the UAB Honors College. Second was picking the lab of Jeremy Herskowitz, Ph.D., for her undergraduate research.

The neuroscience junior from Enterprise, Alabama, is already a co-author on two papers with her Herskowitz lab colleagues and has a third in publication. Next week, she travels to Washington, D.C., with undergraduates from across the United States, where she will have the opportunity to tell senators and representatives why undergraduate research is important, especially at UAB. Curtis is the only student attending from Alabama.

The D.C. event is Posters on the Hill, a national gathering of undergraduate researchers. Curtis is the first presenter from UAB in at least five years, says Gareth Jones, assistant director of the UAB Office of Service Learning and Undergraduate Research. “It’s one of the biggest honors for an undergraduate,” Jones said. “They select only a few out of hundreds and hundreds of applications. The opportunity to meet a senator or representative is what makes it special.”

Curtis plans to say thank you when she meets with U.S. Sen. Richard Shelby, R-Alabama, “because I work in the Shelby Biomedical Research Building at UAB. He has had a direct influence on me as an undergraduate.”

She will also describe the basic research in Alzheimer’s disease that is led by Herskowitz, an assistant professor in the UAB Department of Neurology and the Patsy W. and Charles A. Collat Scholar in Neuroscience. Her work was part of a study funded by the National Institute on Aging of why some older people — whose post-mortem brains show the pathology of Alzheimer’s disease — never developed clinical dementia during their lifetimes and remained cognitively normal. This trait is known as cognitive resilience.

UAB, the only college I applied to

She first heard about the program as her junior-year high school class toured UAB. “UAB really impressed me with academics. It became the only college I applied to.”

When Curtis joined the Herskowitz lab for her research, she found support and mentoring.

“When I started as a freshman, I was really nervous,” Curtis said. “I had never done research before. But my lab manager, Kelsey Greathouse, was really helpful. She made me feel my questions were not stupid questions.”

Undergraduate student Ben Boros, also working in the Herskowitz lab, helped nurture her science. “He was like my mentor. He taught me to use the microscope and analysis machines; he was so intelligent and someone I looked up to.”

Boros, who was first author on the cognitive resilience paper in Annals of Neurology that Curtis helped co-author, is now in the M.D.-Ph.D. program at Washington University, St. Louis.

And former mentee Curtis has now become a mentor herself. “I have trained two new UAB undergraduates and a lab technician,” she said. “We have a huge project and lots of brain tissue to look at.”

Despite her research and the honors thesis she will write next year, medicine — not research — is Curtis’ goal. She became interested in the profession during hospital visits for various gymnastics injuries as a child. At UAB, she has further explored the field by shadowing a neurologist at the UAB Memory Disorders Clinic and volunteering at Children’s of Alabama as a nursing ambassador for children receiving cardiothoracic surgery.

“Kendall understands how important it is to communicate your science to colleagues and the lay public,” Herskowitz said. “She excels at it, and these attributes will translate very well in her career as a physician.”

The third best choice that Curtis says she has made in her life occurred six years ago, and it set her on a course for UAB. Curtis made the decision to attend the Alabama School of Mathematics and Science in Mobile for three years of high school. There, she discovered a confidence in science.

“Honors physics was a required class in senior year, and I had to try really hard in it,” Curtis said. “At the end, I found I got the highest grade in the class — suddenly, I was the top of the ‘smarts.’ At that school, I became a different person.”