Newlyweds to graduate from UAB together with master’s degrees Dec. 13

by Shannon Thomason
Shakima Knox and Steven D. Wilson have made the most of their time on campus: They met at UAB, married on Homecoming Saturday, earned their graduate degrees and will walk together on Saturday. 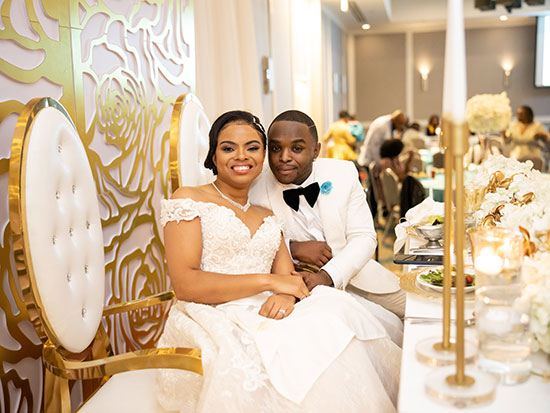 Steven Wilson and Shakima Knox.
Photo courtesy of Aaron Frank PhotoIt is no exaggeration to say the lives of Shakima Knox and Steven D. Wilson were shaped by the University of Alabama at Birmingham.

The pair has made the most of their time at UAB: They performed together in the UAB Gospel Choir, met and courted, excelled as an athlete (her), starred as a singer on stage (him), earned their undergraduate degrees, and were just married on UAB’s Homecoming Saturday on Oct. 19. The pair were even serenaded by superstar performer India.Arie from the stage at UAB’s Alys Stephens Center.

Now they will graduate together with master’s degrees in communication management from the College of Arts and Sciences’ Department of Communication Studies on Friday, Dec. 13, becoming one of the first married couples to graduate simultaneously in this discipline.

Knox, of Newbern, Alabama, and Wilson, of Picayune, Mississippi, by way of Montgomery, met while participating in the Department of Music’s UAB Gospel Choir. Knox was well known as a force to be reckoned with as an NCAA champion with the UAB Women’s Track and Field team. Wilson was heralded as a crooner, landing vocals on several choir projects and winning UAB talent competitions. While on tour with the choir, Wilson nervously introduced himself

to Knox on her birthday, and their lives were never the same, he says. Kevin P. Turner, founder and longtime former director of the choir, remembers when the two met.

“Shakima was extremely focused, and it took a little for Steven to break the ice; but once it was broken, they truly were attracted to each other,” Turner said. “Even on tours out of town, they sat with each other and were inseparable.”

Wilson is one of the most recognizable figures in the Gospel Choir, Turner says, and he looked so much like recording artist Kirk Franklin that he earned the nickname “Lil Kirk.” He was featured on three of the UAB Gospel Choir’s CDs, was one of the main characters on the choir’s “Mirrors” video on YouTube and brought the house down singing Sam Cooke’s “A Change is Gonna Come” at a Gospel Choir concert, and the list goes on for his contributions, Turner says. On the recording “Nu Soul City,” he is featured on lead vocals on “Let Him Bring You Out.” 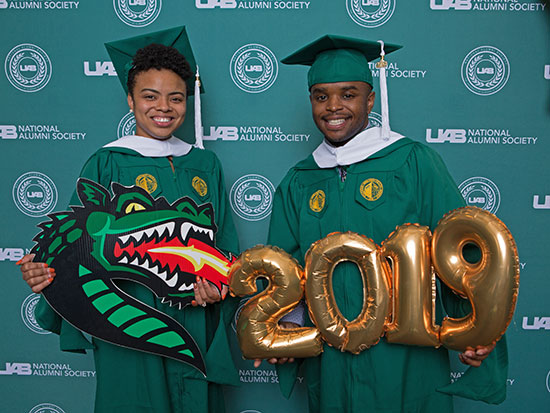 Shakima Knox and Steven D. WIlson were married Oct. 19 and will graduate together from UAB on Dec. 13.Knox graduated in 2014 with a degree in history. She encouraged Wilson when he took a break from school; he was able to complete his undergraduate degree in psychology in 2018. Wilson proposed marriage in August 2018 after a few years of courtship, and Knox happily accepted. Knox was accepted into the Communication Management Master’s Program, and Wilson was able to follow.

Both Knox and Wilson are members of the Society for Collegiate Leadership and Achievement, and Wilson will graduate with honors as a member of Phi Kappa Psi Honor Society. Knox is a former employee at UAB Student Involvement and now works in Student Affairs at the University of Alabama. Wilson works in UAB Student Affairs, in the Student Counseling Services Administrative and Outreach teams.

The pair kept their focus in school so well that many of their communication professors learned only recently they were engaged. Professor of Communication and Graduate Program Director Jonathan Amsbary, Ph.D., says both are highly engaged students, always in the middle of whatever class discussion is going on, and both get a lot out of the opportunities here at UAB. Professor and Department of Communication Chair Timothy Levine, Ph.D., says he has had Knox and Wilson in two classes but only found out they were a couple recently.

“They are delightful people, and we congratulate them both on their marriage and on their graduations,” Levine said. “It has been a pleasure to have them in class, and we wish them the best.”

While focused on coursework for the master’s program, Knox and Wilson were also focused on planning a wedding, hosting nearly 200 guests Oct. 19 at their home church. The couple was escorted from the reception by some of UAB’s current and former Jazz Ensemble students and friends with a New Orleans-styled second line band. The music was incredible, with a house band, alumni choir members singing, a violinist greeting guests and Wilson singing to his bride, says Turner, who attended the wedding. 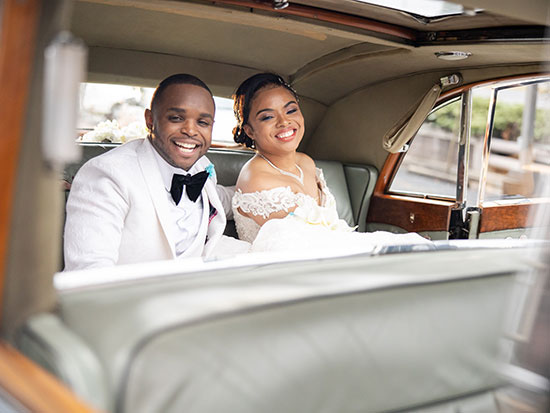 Photo courtesy of Aaron Frank PhotoThe couple plans to celebrate their graduation at Topgolf Birmingham with family and friends. They postponed their honeymoon until after graduation, and will leave for Orlando the day after graduation to enjoy a four-day stay at Walt Disney World Resort with family.

The pair say they feel blessed to be a part of UAB history and grateful for faculty, staff and friends who have been a listening ear and a great resource throughout their tenures at UAB. They each credit their parents and grandparents for their examples of resilience and encouragement to never settle and to be the best versions of themselves possible.

Wilson and Knox are advocators of family preservation, and say they would like to start a family guidance service to assist families in areas that can be strengthened such as co-parenting programs, community involvement, stress management, job assistance programs, and therapeutic counseling for individuals, couples and families. The couple plans to take a mental break before furthering their educations and planning for a family. In the meantime, they will spend some well-earned quality time enjoying each other’s company and making lasting memories together.