A harrowing diagnosis shook Luis Hurtado to his core, but the Blazer hoops player and Collat School of Business student beat the disease with the help of his UAB family.


Luis Hurtado had every reason to be nervous when he stepped onto the court Nov. 20, 2019.

It was his first appearance in a UAB basketball game this season, his first playing time in months and his first competition since defeating the toughest opponent of his life.

But the nerves did not show. The ball came his way with three seconds left on the shot clock, and the UAB sophomore connected, scoring his first career 3-point basket. It all happened on the night of his return from beating cancer.

The dream and the diagnosis

Hurtado grew up in Venezuela and developed a passion for playing basketball at a young age.

“When I started playing, I just fell in love with the sport,” Hurtado said.

His talent took him to the University of Alabama at Birmingham, where he is a student in the Collat School of Business. In his second season as a Blazer, Hurtado was working out all the time, trying to get in the best shape of his life.

“In practice, there were times that my back hurt and just normal back pain, lower back, and I thought everything was good just because I was working extra. That’s probably why it happened,” Hurtado said.

In addition to the back pain, he began to experience intense abdominal discomfort. Hurtado went for testing and soon learned his diagnosis — testicular cancer.

He was in shock. “At this age, it’s like, why is this happening to you? You don’t understand,” said Hurtado thinking back on that emotional day. “I just was crying because, at the time, I didn’t know what was going on.”

UAB basketball coach Rob Ehsan remembers thinking through all the possible outcomes and being thankful that Hurtado was at a university with a world-renowned medical center, and home to the O’Neal Comprehensive Cancer Center at UAB.

“When we found out who the UAB doctors were and what they could do for him and the success rate and how healthy he was,” Ehsan said, “it put a quick ease to our minds and our concerns that, while this was going to be difficult, he was going to get through it.”

The treatment — a team approach

“Being at a large hospital like this, we have great communication. We all have each other’s cellphones and are talking all the time — all day long — about patients that we share,” deShazo said.

“It really was just a great example of a team effort by our providers here at UAB wanting to support the success in every way possible of one of our student-athletes,” Hale said. 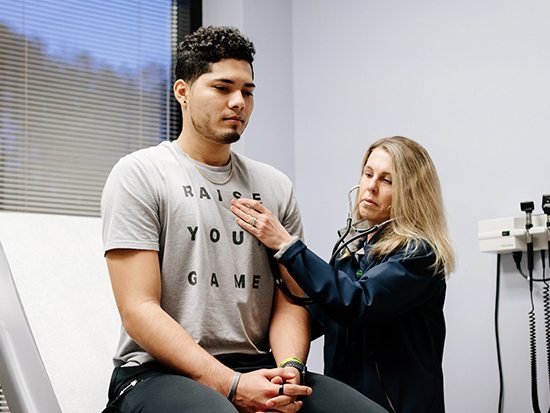 “There’s nothing he did to get this cancer. It’s just bad luck, as most cancers are. He has dealt with it head-on, and I hope that it increases awareness for this younger population.” – Mollie deShazo, M.D., associate professor of medicine in the Division of Hematology-OncologyAccording to deShazo, testicular cancer can be common in younger men, a population that may not be as concerned about their health. She emphasized the importance of Hurtado’s sharing his story to encourage others his age to be aware.

“There’s nothing he did to get this cancer. It’s just bad luck, as most cancers are,” deShazo explained. “He has dealt with it head-on, and I hope that it increases awareness for this younger population that sometimes kind of blows things off.”

In June of 2019, Hurtado celebrated his last chemotherapy treatment. When basketball season resumed, deShazo was not surprised to see him out on the court.

“I got this text of him playing basketball that Dr. Hale sent me. Like, ‘Here he is back at it,’” deShazo said. “It’s rewarding as a physician to think, ‘He’s come a long way, and look at him now.’ He’s such a great person, such a role model.”

“This was a grind with a lot of unknowns,” said Hale of the treatment and recovery. “He faced it with courage and just remained steady. He never seemed to lose hope and always displayed a lot of character that proved to be and continues to be such an inspiration to us all.”

Hurtado worked hard to get back into good enough shape to play basketball. The support of his doctors, teammates, family members and friends fueled his comeback.

When his first shot attempt, the 3-pointer, fell through the net during his first game back, Hurtado fought back tears.

“I wanted to call a time out and cry and sit on the bench for the rest of the game,” Hurtado said. “The shot goes in, and it’s like, like God has a purpose for me, and I was so thankful for the opportunity.”

“When the ball left his hand, I knew it was in,” Ehsan said. “You talk about just a moment from up above. I talked to the team about that, like this is how life works. You fight. You do the right thing in life, and good things happen to you.”