Gene P. Siegal, M.D., Ph.D., endowed professor and executive vice chair of the University of Alabama at Birmingham Department of Pathology and division director of Anatomic Pathology, is the 2015 recipient of the Robbins Distinguished Educator Award from the American Society for Investigative Pathology. The award will be given March 30 at the ASIP 2015 Annual Meeting at Experimental Biology in Boston, Massachusetts.

The Robbins Distinguished Educator Award recognizes people who have had a manifest impact on pathology education at a regional, national or international level. Kevin Roth, M.D., Ph.D., professor and chair of the UAB Department of Pathology, says Siegal has taught for nearly four decades, with major impacts at three top institutions: the Mayo Clinic College of Medicine, the University of North Carolina at Chapel Hill and UAB. 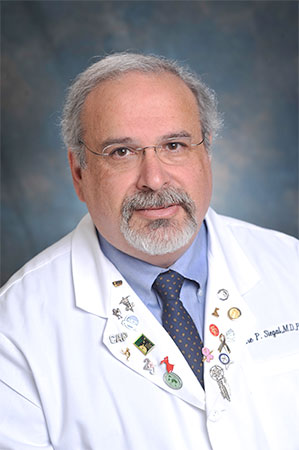 Siegal has also made a lasting impact at the high- school level, where he “played a key role in the NIH-funded Minority High School Student Research Apprenticeship Program, whose goal was to give academically gifted minority students an experience in a basic science research laboratory in the hope that this would be a motivating force in their choosing a biomedical career,” Roth said. In addition, Siegal has published “in excess of 700 peer-reviewed manuscripts, book chapters, abstracts and other professional writings and had three books published this past year alone.”

Siegal is renowned for his lectures that are “exceptionally engaging and entertaining, while providing well-organized and useful content and wise insights,” said J. Charles Jennette, M.D., chair of the Department of Pathology and Laboratory Medicine at UNC. Siegal helped design, implement and administer innovative and effective medical school curricula and residency training programs at UNC and UAB, Roth says, and at UAB he has been “the mentor and surely an inspiration for many young faculty.”

The Robbins Award is named in honor of Stanley Robbins (1915-2003), formerly of Boston University and Brigham and Women’s Hospital. Robbins was cited as “the master teacher of pathology” in his American Journal of Pathology obituary, and in the first edition of his groundbreaking 1957 textbook, “The Scope of Pathology,” Robbins wrote that pathology “is not a discipline isolated from the living patient, but rather a basic approach to a better understanding of disease and therefore a foundation of sound clinical medicine.”

The Robbins Award is partially supported by an unrestricted educational grant from Elsevier, an ASIP Corporate Partner.