by Shannon Thomason
Sonja Rieger’s new series of photographs are portraits of young girls in rural Camden, Alabama, in their Halloween costumes. 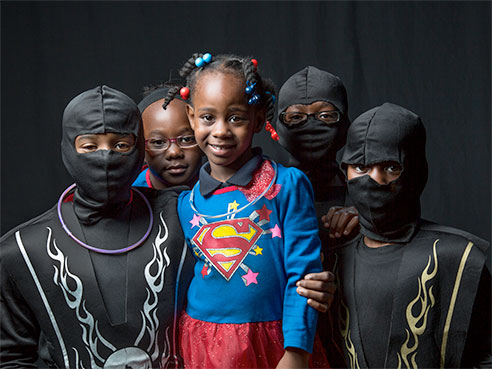 Super Girl with Masked NinjasNew photographic works by Sonja Rieger taken in rural Camden, Alabama, will be on exhibition at beta pictoris gallery from Sept. 18-Oct. 17.

Rieger is professor of photography in the University of Alabama at Birmingham College of Arts and Sciences Department of Art and Art History. “Queen on the Nile” is the artist’s third solo exhibition with the gallery. A free opening reception with the artist is planned for 6-8 p.m. Friday, Sept. 18, at beta pictoris gallery, 2411 Second Ave. North. Visit the gallery online at www.MausContemporary.com.

Camden is 38 miles from Selma, Alabama. As of the 2010 census, there were 2,020 people residing in the town; more than one out of four households had a female householder with no husband present.

Rieger’s new series of photographs are portraits of young girls in their Halloween costumes; some of the costumes were purchased, some were homemade, as if cobbled together in a marvelous attempt to escape a reality, an everyday routine, a town too small, a place too hard, says the description of the show. The girls’ faces marvel at the camera, as if it would, could, transport them into their newly adopted identity: the superhero, the princess, the queen. Their faces are filled with excitement, happiness, shyness, and sometimes disillusion; but also stares of resolve, defiance and determination.

Rieger’s work can be found in the permanent collections of the 21c Museum in Louisville; the Ogden Museum of Southern Art in New Orleans; the International Polaroid Collection in Cambridge, Massachusetts; the Birmingham Museum of Art; and private collections in the United States and Belgium. Her work has been exhibited nationally and internationally over the past 35 years.

Photographic portraits as social commentary have existed all through the medium’s life, and Rieger’s most recent series immediately evokes the photographs shot in south Alabama by Arthur Rothstein (1915-1986), while working for the U.S. government, says Guido Maus, beta pictoris gallery owner.

The photographer often referred to the girl in his image “Artelia Bendolph, Gee’s Bend, Alabama, 1937” as a “Queen on the Nile,” Maus says. An example of the image will be on display at the exhibition of Rieger’s works.