by Jeff Hansen
The award honors his distinguished contributions to neuroscience, particularly for discovery of gliotransmission. 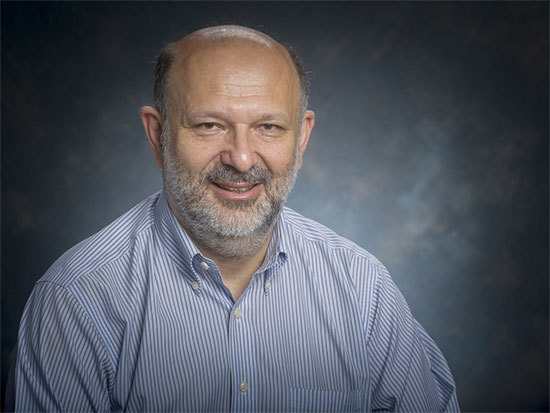 When Vladimir Parpura, M.D., Ph.D., was publishing part of his thesis work in the journal Nature more than two decades ago, his adviser said, “You know, Vladimir, this may be the biggest deal you ever do in your life.”

That unprecedented discovery of the astrocyte-neuron glutamate-mediated signaling pathway — work that Parpura has expanded ever since — has now been honored with his election as a 2017 Fellow of the American Association for the Advancement of Science.

Parpura, a professor of neurobiology in the University of Alabama at Birmingham School of Medicine, and 395 other 2017 AAAS Fellows will be presented with blue and gold rosette pins Feb. 17 at the AAAS Annual Meeting in Austin, Texas, to honor their scientifically or socially distinguished efforts to advance science or its applications. Parpura’s election notes his “distinguished contributions to the field of neuroscience, particularly for discovery of gliotransmission.”

Gliotransmission has proved to be important for sleep, respiration, learning and memory, gut motility, and secretion.

Astrocytes, a type of glial cell in the brain, had been thought to merely support brain neurons. Gliotransmission was the discovery of a novel functional role for astrocytes — release of the transmitter glutamate as a signal to adjacent neurons. This astrocyte signaling was subsequently found to modulate synaptic transmission, which led to the concept of the tripartite synapse.

“I congratulate Vlad on his election as an AAAS Fellow,” said John J. Hablitz, Ph.D., professor and interim-chair of neurobiology at UAB. “This is a great honor for him and reflects well on the Neurobiology Department and the entire UAB Neuroscience community.”

Parpura is one of 18 neuroscientists recognized this year as AAAS Fellows.

Parpura, the son of a physician father and attorney mother, grew up in the Dalmatia region of Croatia and received his medical degree from the University of Zagreb. He earned a Ph.D. at Iowa State University and came to UAB from the University of California, Riverside in 2007. Parpura is a member of the Academia Europaea, the Dana Alliance for Brain Initiatives, and the Slovenian Academy of Sciences and Arts, and he currently serves as president of the American Society for Neurochemistry.

Parpura, a rigorous and engaging teacher at UAB at both the undergraduate and graduate levels, calls curiosity the foundation of research.

“If you are not curious, there is no science,” he said. “If there is curiosity, you will be doing science.”

Election as an AAAS Fellow is an honor bestowed upon AAAS members by their peers. The full list of 2017 Fellows will be announced in this Friday’s edition of the journal Science. The AAAS is the world’s largest general scientific society and publisher of the journal Science, as well as Science Translational Medicine, Science Signaling, Science Advances, Science Immunology and Science Robotics.

The association was founded in 1848 and includes nearly 250 affiliated societies and academies of science, serving 10 million individuals with a mission to advance science and serve society through initiatives in science policy, international programs, science education and public engagement. The tradition of AAAS Fellows began in 1874.