UAB alumnus Hernandez D. Stroud has been named to Forbes’ 2018 list of 30 Under 30 in Law and Policy. 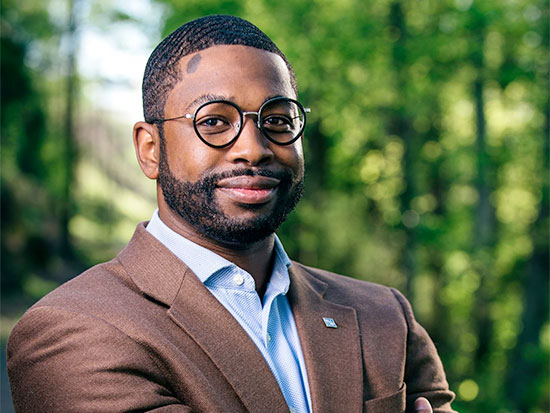 Photo Credit: Andrea MabryHernandez D. Stroud of Huntsville, a graduate of the University of Alabama at Birmingham, has been named to Forbes’ 2018 list of 30 Under 30 in Law and Policy.

Stroud earned a Bachelor of Arts degree in history and political science from the UAB College of Arts and Sciences in 2010. He was also a Hess-Abroms and Spencer Scholar and student in the UAB Honors College University Honors Program.

“My UAB days, without question, helped me realize my passion, which is helping others,” Stroud said. “As a student in the University Honors Program, I learned from a diverse group of faculty and students. Never had I considered the variety of perspectives I did prior to UHP. That experience made me more empathetic.”

After graduating from UAB, Stroud postponed enrollment to Washington and Lee University School of Law, where he now is a visiting assistant professor, to teach at an inner-city high school in Philadelphia as a member of the Teach for America corps. After law school, he was selected as a fellow at Yale Law School, where he studied constitutional and criminal law implications of governmental interactions with drug addiction during pregnancy. While at Yale, he served as a policy adviser to New Haven Mayor Toni N. Harp.

At Washington and Lee, Stroud teaches and researches civil rights, federal courts, federalism, legislation and statutory interpretation. He has researched and written about legal issues related to addiction. Stroud says his experiences being raised in a working-class family, being a first-generation college student and hearing stories from his grandparents about growing up in the South during the Jim Crow era are what led him to focus on law and policy.

“Until I graduated from college, no one in my family had done so,” said Stroud. “Based on my formative experiences, I understood that I needed to transcend in the realm of law and policy to truly advocate to use my passion to help others, even if it’s just being an example to someone who grows in similar circumstances as my own.”

While at UAB, Stroud served as the 2009-2010 UAB Undergraduate Student Government president and a student representative to the University of Alabama System Board of Trustees.

He earned a master’s degree in urban education and education policy from the University of Pennsylvania.

Next year, Stroud will clerk for the U.S. Court of Appeals for the 1st Circuit.