by Jeff Hansen
Altered epigenetic marks on ribosomal RNAs appear to create a pool of specialized ribosomes that can differentially regulate translation of specific messenger RNA. 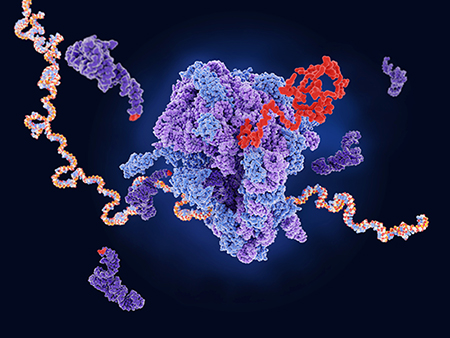 Altered epigenetic marks on ribosomal RNAs appear to create a pool of specialized ribosomes that can differentially regulate translation of specific messenger RNA.Hypoxia — where a tissue is deprived of an adequate supply of oxygen — is a feature inside solid cancer tumors that renders them highly invasive and resistant to treatment. Study of how cells adapt to this critical stressor, by altering their metabolism to survive in a low-oxygen environment, is important to better understand tumor growth and spread.

Researchers led by Rajeev Samant, Ph.D., professor of pathology at the University of Alabama at Birmingham, now report that chronic hypoxia, surprisingly, upregulates RNA polymerase I activity and alters the methylation patterns on ribosomal RNAs. These altered epigenetic marks on the ribosomal RNAs appear to create a pool of specialized ribosomes that can differentially regulate translation of messenger RNA.

This supports a postulate, long debated in biology, that the ribosomal protein factories can be reprogrammed in response to stresses to favor the manufacture of certain proteins.

Ribosomes are macromolecular machines made of ribosomal RNAs and ribosomal proteins, and mammalian cells may have as many as 10 million of them. They sequentially read a messenger RNA that directs the ribosome to add specific amino acids, from of a choice of 20 different amino acids, to a growing peptide chain that folds to form the completed protein. A messenger RNA is a copy of the DNA gene for that protein, and it carries the gene’s information for building a protein from the chromosome to the ribosomes.

The finding of significantly increased RNA polymerase I activity in hypoxic breast tumor, mammary epithelial and breast epithelial cell lines that were used as models in the UAB study was unanticipated because RNA polymerase I is the only RNA polymerase used to make ribosomal RNA, and it is strictly regulated. One might expect that hypoxic cells would want to decrease their ribosomal RNA synthesis to save energy, not make more. But in accord with the increased RNA polymerase I that the UAB researchers found in hypoxic cells, there was also increased ribosome biogenesis in both the hypoxic model cell lines and the hypoxic regions of spontaneous tumors in mice, as measured by increased nucleoli and another test.

But were these new ribosomes different from ribosomes found in cells grown under normal oxygen levels?

One major challenge to defining specialized ribosomes has been the lack of a method to selectively isolate a subpopulation of ribosomes that may have functional diversity. To selectively isolate the subpopulation, the UAB team used messenger RNA for a protein called VEGF-C, a protein known to boost the new blood vessel formation called angiogenesis. Hypoxia is known to trigger a switch to angiogenesis and elevated expression of VEGF-C. Furthermore, during hypoxia, VEGF-C messenger RNA is translated by an alternate ribosomal entry point, controlled by the internal ribosome entry site, or IRES, sequence on the VEGF-C messenger RNA.

Samant and colleagues found that hypoxia induced VEGF-C production in their cell models. They were able to use the VEGF-C IRES to pull down hypoxic ribosomes, and they found that these ribosomes had a pattern of methylation on their 18S, 28S and 5.8S ribosomal RNAs that was distinct from the ribosomal RNAs of cells grown in normal oxygen. 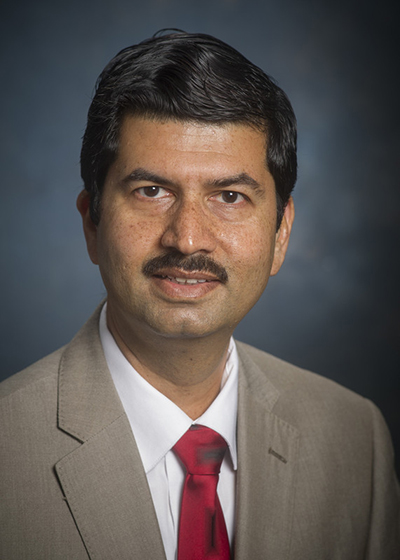 Samant and colleagues found that expression of a protein called NMI was remarkably compromised at the protein and messenger RNA levels during hypoxia. NMI contains a previously uncharacterized RNA recognition motif that can bind single-stranded RNAs.

One class of the single-stranded non-coding RNAs in the cell’s nucleolus, called SNORDs, are known to guide the methyltransferase enzyme fibrillarin to methylate specific bases of ribosomal RNA. When the UAB researchers investigated which RNA species could bind to NMI, “to our excitement,” Samant said, “we found that many of the top-ranking RNA entities bound to NMI were SNORDs.” There are more than 106 SNORDs in human cells to guide methyltransferase to specific sites; NMI bound nine SNORDs that were associated with changes at 14 methylation sites on the hypoxic ribosomal RNAs. NMI also bound the methyltransferase fibrillarin.

“We speculate that NMI acts to regulate the available pool of fibrillarin and SNORDs that can interact, which most likely will affect rRNA methylation patterns,” Samant said.

For more details, including distinct proteins that are recruited to the VEGF internal ribosome entry site, see the study, “Hypoxia re-programs 2’-O-Me modifications on ribosomal RNA,” published in the CellPress journal iScience.

At UAB, Samant is also a senior scientist in the O’Neal Comprehensive Cancer Center at UAB.