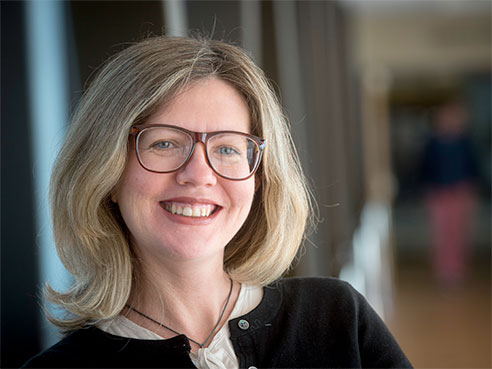 A new University of Alabama at Birmingham research paper published in the journal Diabetes Research and Clinical Practice shows for the first time that there is an association of verapamil use and lower fasting glucose levels in humans with diabetes. It is a promising finding at UAB, where the Comprehensive Diabetes Center is currently conducting a first-of-its-kind, JDRF-funded clinical trial using verapamil, a drug that researchers in the School of Medicine have shown completely reverses the disease in mice models.

Yulia Khodneva M.D., Ph.D., a research associate and postdoctoral scholar in UAB’s Division of Preventive Medicine and junior member of the Comprehensive Diabetes Center, examined the association of calcium channel blockers and verapamil use with fasting serum glucose among almost 5,000 adults with diabetes who were part of the REGARDS study. The Reasons for Geographic and Racial Differences in Stroke project, sponsored by the National Institutes of Health, is a national study focusing on learning more about the factors that increase a person’s risk of having cardiovascular disease.

“This is a cross-sectional observational study unlike the current prospective randomized UAB verapamil clinical trial, so we can’t infer causal relationship between using verapamil and lower glucose levels; but we can say there is an association with lower glucose levels, and that is absolutely encouraging,” Khodneva said.

Khodneva says the findings in the final subgroup, which used insulin alone and included participants who had mostly Type 1 or severe Type 2 diabetes, were quite striking.

“The change in glucose for that group compared to those not taking verapamil — 37 mg/dL — is almost four times higher than when you look at the whole sample of diabetic adults,” Khodneva said. “That made us think that verapamil is predominantly active for participants who have Type 1 diabetes or those with Type 2 diabetes who have really damaged beta cells. There seems to be something that works on the structural level, especially for those who have stronger beta-cell damage.”

“Dr. Khodneva has done a tremendous job analyzing these large data sets and discovering for the first time that verapamil use is associated with lower glucose levels in patients with diabetes,” said Anath Shalev, M.D., director of UAB’s Comprehensive Diabetes Center and principal investigator of the verapamil clinical trial. “Strikingly, the observed difference in glucose levels is comparable to an approximately 1 percent reduction in HbA1C and to what would be expected from the addition of an approved diabetes drug. Moreover, the large difference in glucose levels especially in the groups taking insulin is consistent with our underlying hypothesis that verapamil promotes functional beta-cell mass.”

UAB announced its verapamil clinical trial in November 2014 and began enrolling patients in January 2015. The first results that will assess verapamil’s effectiveness on Type 1 diabetes are still approximately 18 months away.

The trial is testing an approach different from any current diabetes treatment by focusing on promoting pancreatic beta cells, which produce insulin the body needs to control blood sugar. UAB scientists have proved through years of research that high blood sugar causes the body to overproduce a protein called TXNIP, which is increased within the beta cells in response to diabetes, but had never previously been known to be important in beta-cell biology. Too much TXNIP in the pancreatic beta cells leads to their death and thwarts the body’s efforts to produce insulin, thereby contributing to the progression of diabetes.

But UAB scientists have also uncovered that verapamil, which is widely used to treat high blood pressure, irregular heartbeat and migraine headaches, can lower TXNIP levels by decreasing calcium concentration in the beta cells — to the point that, when mouse models with established diabetes and blood sugars above 300 milligrams per deciliter were treated with verapamil, the disease was eradicated. See an animation of how this works here.

The trial will enroll 52 people between the ages of 18 and 45 who are within three months of receiving a diagnosis of Type 1 diabetes. More than 20 people have enrolled so far, and more participants are needed. For more information or to enroll, contact UAB at 205-934-4112 or T1DM@uab.edu.