by Jeff Hansen
The ecRNAs appear to act in memory formation, and may offer a new therapeutic approach to neuropsychiatric diseases. 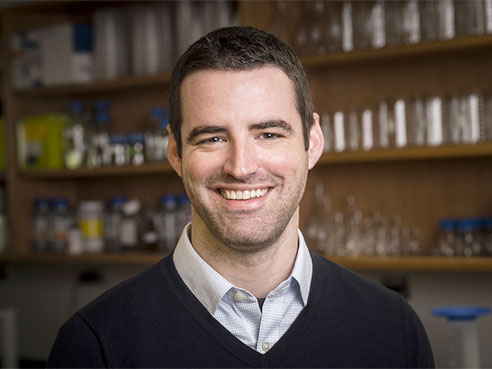 Jeremy DayThe creation of memories in the brain involves addition or removal of methyl groups at precise spots on chromosomal DNA. But what controls the careful targeting of these neuronal DNA methylation dynamics?

The key appears to be a special form of RNA called extra-coding RNA, or ecRNA, according to Jeremy Day, Ph.D., and colleagues at the University of Alabama at Birmingham and Purdue University. The ecRNAs, they say, are fundamental regulators of DNA methylation patterns in the adult brain through interaction with DNA methyltransferase enzymes, and the ecRNAs may offer a promising future therapeutic avenue to treat neuropsychiatric disease states associated with changes in DNA methylation, as they report in the July 7 issue of Nature Communications.

To demonstrate the critical role for ecRNA-directed methylation, first author Katherine Savell, a graduate student in the Day lab, blocked one specific ecRNA for the Fos gene locus in the hippocampus of the rat brain. Decrease in this specific ecRNA prevented formation of a long-lasting fear memory, where rats learn to associate mild electrical shocks with a particular place. This highlights a potential role for ecRNAs in cognitive function of the brain.

As the name suggests, ecRNA partially overlaps with a gene sequence that produces messenger RNA; but it also includes RNA sequences from DNA beyond the gene boundary. Each ecRNA is specific to the gene it overlaps. Experiments by the UAB researchers included both a broad, genomewide look at ecRNAs and gene expression, and a detailed example using the Fos gene locus.

The researchers performed genomewide classification of neuronal ecRNAs and showed ecRNA species are generated from genes that are vital for nerve cell responses to stimulation. Treating neurons with drugs that increase or decrease neuronal activity modified ecRNA production.

The researchers showed these relationships between ecRNA production and gene activity in neurons included genes whose expression is altered by neuronal activity and genes implicated in developmental and neurodegenerative disorders.

Thus, ecRNAs are one of the first potential mechanisms for activity- and experience-dependent alterations of DNA methylation status at specific genes in brain neurons. 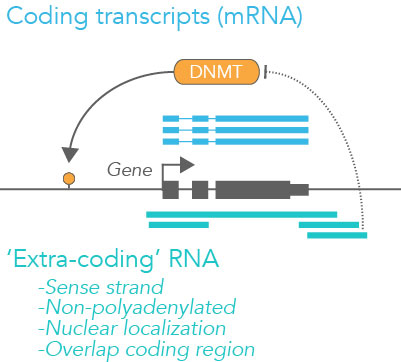 The researchers also provided a detailed analysis of ecRNAs arising from the Fos gene locus. They found that:

A model and therapeutic potential

The model requires the ecRNA to stay near or at the gene after synthesis in order to regulate the methyltransferases just at that gene location. One possibility, the researchers say, is that the ecRNAs have a very short half-life, so they would disappear before moving very far from a specific gene. A second, more intriguing possibility is that the ecRNAs form a triplex structure with DNA that stabilizes and anchors the ecRNA at the gene location.

The researchers also note that many neuropsychiatric and neurological diseases are associated with chronic alterations of specific gene products in neurons. Targeting ecRNAs in the brain could be an attractive therapeutic approach to reorganizing epigenetic landscapes at specific genes, thus alleviating longstanding pathologies associated with dysfunctional methylation patterns.

Day is an assistant professor in the UAB Department of Neurobiology and the Evelyn F. McKnight Brain Institute.