by Bob Shepard
There will be more than 33,000 brain tumors diagnosed in Americans this year, according to the National Cancer Institute; but a UAB neurosurgeon says advances in treatment paint a brighter outlook than in years past. 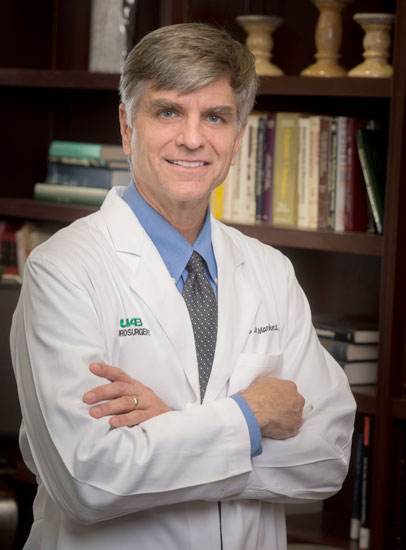 UAB neurosurgeon James Markert, M.D.  A brain tumor was the furthest thing from Kathy English’s mind that day in 2003 when she walked into a neurologist’s office. She’d had some uncontrolled sinus issues, so her doctors had ordered a variety of tests, including an MRI. When she arrived to get the MRI results, the neurologist said he had not yet had a chance to look at them himself.

“He said we’d look at them together,” English recalled. “As he looked over the scan, he pointed out a small abnormality, a tumor which he described as a meningioma. Then he saw another one. And another. By this time, I was getting pretty worried. Ultimately, he found 12, and now I was really worried.”

A meningioma is a usually benign, slow-growing tumor. While referred to as a brain tumor, it actually does not grow from brain tissue but rather from the meninges, layers of tissue which cover the brain. Still, 12 meningiomas are not to be taken lightly.

The neurologist immediately referred English to neurosurgeon James Markert, M.D., an internationally renowned brain tumor expert at the University of Alabama at Birmingham.

Markert, who is professor and chair of the Department of Neurosurgery in the UAB School of Medicine, says meningiomas are relatively rare, but certainly not unheard of. He followed English for several years, and when one of the tumors began to grow, he surgically removed it, along with eight others that were easily accessible. Two more were later eliminated through a gamma knife radiation procedure. Markert continues to monitor the others. Through it all, English never had any symptoms, other than a bucket-full of anxiety.

“It was like knowing you have bugs on your head … ‘Get them off! Get them off!’” she said. “It’s so reassuring to know that I’m being treated and monitored by some of the top brain tumor people in the nation.”

Her experiences made English something of a brain tumor expert herself, certainly enough to realize something was not right when her husband, John, became dizzy and off-balance after bending over to unplug a computer cord. He’d had a couple of bad headaches in the previous weeks, and that evening in the fall of 2016, there was something obviously wrong.

“We ruled out stroke pretty quickly, and our physician ordered an MRI,” English said. “The results came back — astrocytoma. A brain tumor. We were stunned.”

Two days later, John English was in Markert’s office, and in less than two weeks, had surgery to remove a Grade 2 tumor. His recovery has been robust, and he knows he is lucky.

“While we never anticipated having a second person in the family with a brain tumor, Kathy’s experiences made us proactive,” John said. “My prognosis is so much better due to the quick recognition of the tumor, and the quick response by UAB.”

The Englishes did not consider themselves prime candidates for brain tumors. Both are pescatarians (individuals who add fish to a vegetarian diet) who stay fit and keep a close eye on their health.

“The scientific community still has much to learn in order to predict the onset of a brain tumor or who is at risk,” said Markert, who holds the James Garber Galbraith Endowed Chair of Neurosurgery at UAB and is a senior scientist in the UAB Comprehensive Cancer Center. “Some, called primary tumors, arise in the brain. Others are called metastatic tumors, which arise elsewhere in the body and migrate to the brain.”

The good news, Markert says, is that the landscape for brain tumor therapy is much better now than ever before.

“A diagnosis of a malignant brain tumor is still devastating, but we’ve come a long way,” he said. “The horizon is very bright for the development of even more impactful treatments in the very near future.”

Markert credits improved imaging with some of that optimism. Improvements in neuroimaging can now reveal much more information about the makeup of tumors.

“We used to classify tumors based simply on their microscopic appearance,” Markert said. “We are now able to look at mutations within tumor cells, and we’ve found that certain sets of mutations are associated with different tumor types and subtypes. This really is precision medicine, as we can now tailor therapy based on our better understanding of the genetic signature of an individual tumor.”

A new oral chemotherapy agent called temozolomide is a good example. It is effective on some tumors, but others are resistant to the drug. Advances in genetic testing can predict which patients will respond best to the drug and which will not.

Another new agent, aminolevulinic acid, or 5-ALA, is used in a fluorescence imaging technique. The drug is absorbed into tumors and causes them to glow when viewed on an MRI. Surgeons can then better visualize the tumor, especially at its boundaries with healthy cells. Those boundaries are usually indistinct, and the line between tumor and healthy tissue can be blurred. 5-ALA helps guide surgeons as they attempt to remove as much of a tumor as possible while leaving healthy tissue intact. 5-ALA is expected to be approved for use by the FDA in the near future.

New technology will soon be in place at UAB, such as intraoperative MRI scanning, where surgeons will have the ability to do real-time MRI scans in the operating room during surgery. Another advance, also based on improved MRI use, will employ lasers surgically inserted into the tumor to precisely destroy tumor cells with heat energy. 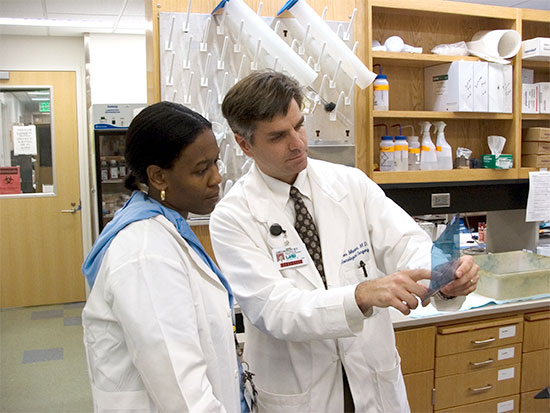 Markert's laboratory in investigating a second-generation modified herpes virus that shows promise as a brain tumor killer.  Markert says proton therapy, an option over traditional radiation technology and coming to UAB in 2019, can be a valuable tool for pediatric tumors or tumors situated close to delicate structures such as the brain stem or optic nerve.

Another promising therapy has been under investigation in Markert’s lab for years. In 2001, Markert and his colleagues published initial results of a first-generation genetically engineered herpes virus as a therapy to destroy brain tumors. A second generation virus, known as M032, is currently undergoing clinical trials. The virus infects tumor cells and replicates, while leaving healthy cells alone.

The act of viral replication in the tumor kills the infected tumor cells and causes the tumor cell to act as a factory to produce new viruses. As the tumor cell dies, progeny viruses are released from the cell. These viruses infect other tumor cells in the vicinity and continue the process of tumor killing. The virus also causes the patient’s own immune system to attack the tumor.

Markert explains that the body’s immune system is designed to patrol for foreign cells in the body, including mutated cancer cells. The immune system’s killer T cells have an off-switch, known as a checkpoint. The checkpoint is usually turned off, keeping T cells from attacking healthy cells. It turns on — again, usually — in the presence of a foreign cell, prompting T cells to attack. But tumor cells are very good at fooling the checkpoint so it remains in the off position. Drugs known as checkpoint inhibitors are under development which would turn the checkpoint on, stimulating the T cells to attack the tumor.

“One approach we are considering now is a combination of viral and immunotherapy,” Markert said. “The viral therapy using our modified herpes virus should produce a vibrant immune response, followed by introduction of the checkpoint inhibitors, which would turn on the checkpoints and activate individual T cells.”

Markert is excited about the future of brain tumor research and treatment. As a leading academic medical center home of one of the nation’s Comprehensive Cancer Centers, and the state’s leader in personalized medicine, UAB is primed to be at the forefront of new discovery.

“We have a remarkable array of talent here, in radiation oncology, hematology/oncology, neurology, neurosurgery, and other fields,” he said. “We have an outstanding research enterprise in both adult and pediatric brain tumors. It’s an exciting time to be in this field.”

Brain cancer is not the most prevalent kind of cancer — breast and lung cancer top the list; but malignant brain tumors can be particularly devastating. The National Cancer Institute predicts 33,800 new cases in 2017. The NCI also estimates that 16,700 Americans will die of brain cancer this year.

“We are turning a corner, but there are still too many people who die from brain tumors each year,” Markert said. “These patients and their families are very courageous people. We owe it to them to find better treatments.”

The Englishes had two firsthand experiences to convince them to continue to be proactive and involved in their health care.

“Pay attention to your body, and if something unusual happens, don’t blow it off,” John said. “Be aggressive in following up. We are two people who paid attention to our medical issues and, as a result, got the right care to provide us the best possible outcomes.”