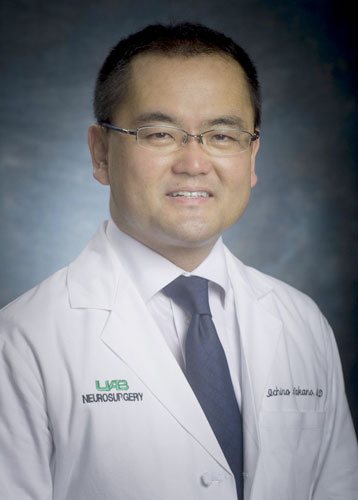 A collaborative team of neuro-oncology surgeon/scientists — led by Ichiro Nakano, M.D., Ph.D., University of Alabama at Birmingham, and Maode Wang, M.D., Xi’an Jiaotong University, Xi’an, China — has discovered a unique and previously unidentified molecular mechanism that maintains glioma stem cells, and they have tested it as a potential therapeutic target in glioblastoma, using a novel small molecule inhibitor they designed and synthesized.

This international study was launched when they found that another inhibitor for advanced cancers, called OTS167, had a negative outcome in a clinical trial. The Nakano laboratory immediately began to investigate the molecular mechanism underlying glioblastoma resistance to OTS167.

They found that a different molecular target, NEK2, evolved after OTS167 treatment for glioblastoma, and they used computer-based drug design to target NEK2. The resulting NEK2 inhibitor, called CMP3a, was able to inhibit growth in pre-clinical models of glioblastoma, both in culture and in mouse brains. When combined with radiation, CMP3a has a synergistic effect to attenuate growth of glioblastoma cells in culture.

“We are currently in the process of pharmacokinetic and pharmacodynamic analyses with CMP3a to design an early-phase clinical trial for glioblastoma and other NEK2/EZH2-dependent cancers,” they said in an article published today in The Journal of Clinical Investigation. “We are hopeful to add this drug candidate to our list of clinical trial protocols for glioblastoma in a year or two,” Nakano said.

NEK2 is a poorly characterized kinase enzyme. The researchers found that NEK2 is differentially expressed in glioma stem cells, and it is required for growth of glioma clones in culture, as well as for growth and radiation resistance of a human glioblastoma tumor in the mouse model.

Through a series of detailed experiments, the researchers revealed how NEK2 promotes tumor growth and resistance — they found that NEK2 protein binds to EZH2, an oncogenic histone H3 methyltranferase, and this binding protects EZH2 from protein degradation in the glioma stem cells. EZH2 was already known to regulate the self-renewal and survival of glioma stem cells. Thus, by stabilizing EZH2, NEK2 promotes tumor propagation.

“Disrupting the NEK2-EZH2 interaction in cancer cells has the potential to target their cancer stem cell compartment,” Nakano, Wang and colleagues wrote in their JCI report. “This strategy may serve as a new therapeutic approach for recurrent tumors and a subgroup of primary tumors.”

NEK2, they concluded, appears to play a key role in maintaining glioma stem cells by stabilizing the EZH2 protein, and the small molecule inhibitor CMP3a is a potential novel therapeutic agent for glioblastoma.

The researchers had previously studied the MELK-EZH2-STAT3 signaling axis as a central regulator for glioma stem cells in glioblastoma. A MELK inhibitor showed short-term efficacy against human glioma xenografts in a mouse model, but the cultures soon became resistant to the MELK inhibition. Unexpectedly, those resistant glioma cultures retained their EZH2 dependence, prompting the researchers to search how the EZH2 levels were maintained.

They found that EZH2 was protected post-translationally. They also found that NEK2 was the most up-regulated kinase gene in glioma spheres and that NEK2 expression showed a strong association with EZH2 expression in protein profiles for human cancers in the Human Protein Atlas. So, they then looked to see if NEK2 played an essential role in post-translational regulation of EZH2.

Nakano is an academic neurosurgeon at UAB who conducts both brain tumor translational research and clinical brain tumor surgery. He is professor of neurosurgery in the UAB School of Medicine and a senior scientist for the UAB Comprehensive Cancer Center.