by Jeff Hansen
This knowledge can provide targets in the search for novel bone-loss therapeutics to treat osteoporosis. 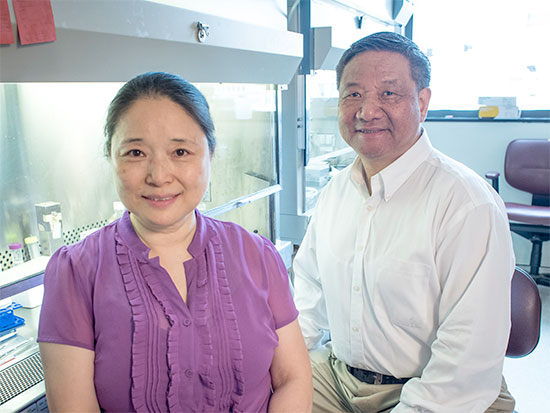 Wei Chen, M.D., left, and Yi-Ping Li, Ph.D.A major health problem in older people is age-associated osteoporosis — the thinning of bone and the loss of bone density that increases the risk of fractures. Often this is accompanied by an increase in fat cells in the bone marrow.

University of Alabama at Birmingham researchers have now detailed an underlying mechanism leading to that osteoporosis. When this mechanism malfunctions, progenitor cells stop creating bone-producing cells, and instead create fat cells. Knowledge of this mechanism can provide targets in the search for novel bone-loss therapeutics to treat human osteoporosis with minimal side effects.

Thus, they propose, maintaining Cbf-beta may be essential to preventing human age-associated osteoporosis that is due to elevated creation of fat cells.

Bone is a living tissue that constantly rebuilds. Bones need a constant new creation of cells specific to their tissue, including the bone-producing cells called osteoblasts. Osteoblasts live only about three months and do not divide. 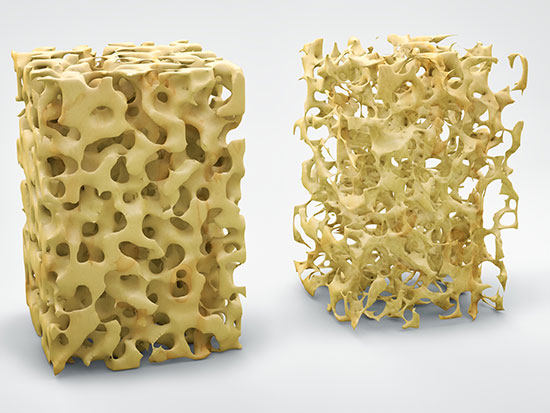 A protein called Cbf-beta plays a critical role in maintaining bone-producing cells. An examination of aged mice showed dramatically reduced levels of Cbf-beta in bone marrow cells, as compared to younger mice. Thus, the researchers propose, maintaining Cbf-beta may be essential to preventing human age-associated osteoporosis that is due to elevated creation of fat cells.UAB researchers and colleagues focused on the molecular mechanism that controls the lineage commitment switch between the osteoblast and adipocyte tracks. Led by Yi-Ping Li, Ph.D., UAB professor of pathology, and Wei Chen, M.D., UAB associate professor of pathology, they investigated the key role played by Cbf-beta, or core-binding factor subunit beta.

The team led by Li and Chen generated three mouse models by deleting Cbf-beta at various stages of the osteoblast lineage. All three mouse models showed severe osteoporosis with accumulation of fat cells in the bone marrow, a pathology that resembles aged bone from enhanced adipocyte creation.

Looking at the mechanism downstream, the researchers found that the loss of Cbf-beta impeded the canonical Wnt signaling pathway, particularly through decreased Wnt10b expression. In nonmutant mice, they found that the protein complex composed of Cbf-beta and the Runx2 transcription factor binds to the Wnt10b promoter to drive Wnt10b expression. The Cbf-beta/Runx2 complex also inhibited expression of the enhancer protein C/EBP-alpha that promotes differentiation of adipocytes.

In addition, the researchers showed that Cbf-beta maintains the osteoblast lineage commitment in two ways — through the Wnt paracrine pathway to affect nearby cells and through endogenous signaling within the cell to suppress adipogenesis gene expression.

Altogether, this knowledge of the mechanism driven by Cbf-beta can help explain the imbalance in bone maintenance seen in older people.

Funding came from National Institutes of Health grants AR-044741 and DE-023813 to Li, and AR-070135 to Chen. Assistance at UAB also was provided by the Center for Metabolic Bone Disease, the Small Animal Phenotyping Core, the Metabolism Core and the Neuroscience Molecular Detection Core Laboratory.