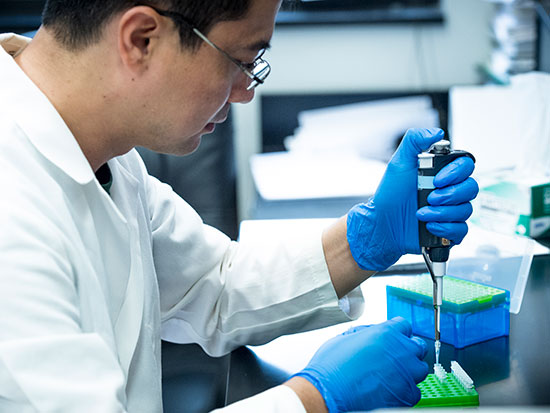 The Comprehensive Diabetes Center currently has a promising drug in the Alabama Drug Discovery Alliance pipeline and an ongoing clinical trial which repurposes verapamil as a beta cell survival therapy in type 1 diabetes.Four Birmingham businessmen did not bond over shared hobbies. Their common interest was rooted in finding a way to eradicate a disease that affects close to 30 million Americans, including members of their own families and company — diabetes.

“It was an easy inspiration,” said Aldag, CEO and president of Medical Properties Trust, the second-largest owner of hospital beds in the United States, with a reach that extends to five countries. “We are in the health care business, and diabetes is one of the worst and most prevalent diseases in this country. We have heard about the great work in the research lab of Dr. Anath Shalev at UAB’s Comprehensive Diabetes Center, and it was an easy decision to give this gift.”

UAB Comprehensive Diabetes Center researchers are conducting cutting-edge research into the causes and mechanisms of diabetes with a promising drug currently in the Alabama Drug Discovery Alliance pipeline, and the ongoing clinical trial that repurposes verapamil as a beta cell survival therapy in Type 1 diabetes. Directed by Anath Shalev, M.D., the Nancy R. and Eugene C. Gwaltney Family Endowed Chair in Juvenile Diabetes Research, UAB scientists are working on these and other novel disease-altering therapies, and training future generations of diabetes researchers and clinicians while providing the highest-quality innovative care to diabetes patients.

“The research efforts of Dr. Shalev and everyone involved in the Comprehensive Diabetes Center are centered around one goal — eradicating this debilitating disease that affects 30 million Americans, including more than 13 percent of Alabamians,” said Ray L. Watts, UAB president. “Gifts like this one from Medical Properties Trust combined with the philanthropic efforts of David Silverstein and Benny LaRussa are vital to expanding and accelerating our globally renowned research efforts. We are appreciative of their gift and determination to raise an additional $2.5 million to support our world-class researchers, and we are excited to partner with them in this effort.”

Silverstein and LaRussa are honoring Medical Properties Trust for its gift with an event Thursday, Oct. 12, at The Country Club of Birmingham. The event will also serve as the launch to raise the additional $2.5 million in support of this $7.5 million initiative.

Steven Hamner, Medical Properties Trusts’ chief financial officer and co-founder, says the combined gifts from his company and UAB, and the drive to raise an additional $2.5 million from the community, are vital to continuing to advance the progress in the field. The three Medical Properties Trust leaders were also inspired to make this philanthropic donation because two valued employees have Type 1 diabetes, one of whom is Silverstein’s daughter, Sarah.

“It’s personal to us as a company,” said McLean, Medical Properties Trust’s executive vice president and chief operating officer. “I think a lot of our other employees didn’t realize these two have diabetes because they look so healthy, but the fact of the matter is that diabetes is an indiscriminate disease. It would be wonderful if the Medical Properties Trust gift could give those living with diabetes healthier lives.”

Shalev says the desire that Medical Properties Trust has to help find a way to end diabetes is inspiring to the researchers in UAB’s Comprehensive Diabetes Center. She says their generous gift will help combat the epidemic of diabetes and prediabetes in Alabama, which cost an estimated $5.4 billion total in direct medical expenses and associated indirect costs from lost productivity in the state each year, according to the American Diabetes Association.

“We are in the buckle of the diabetes belt, and as a state, we are typically either No. 1 or No. 2 in the nation in terms of our diabetes prevalence,” Shalev said. “We are grateful to Medical Properties Trust for this gift, as it addresses an urgent need.”

Fathers on a mission

Providing healthier lives for people with diabetes is a cause Silverstein and LaRussa have championed since their daughters, Sarah Silverstein and Chelsey LaRussa Heslop, were each diagnosed with Type 1 diabetes as children almost 20 years ago.

“At the time Sarah was diagnosed, I knew very little about the disease,” said Silverstein, a principal at Bayer Properties Inc., who teared up while talking about his daughter’s fight. “But having a child with a life-threatening disease puts everything into perspective, and I made a commitment to Sarah that I would better understand the disease and do what I could to raise money to find a cure.”

Silverstein has lived up to that promise. He and LaRussa initially raised $15 million through private donations and gifts from the Diabetes Trust Fund to establish the UAB Comprehensive Diabetes Center in 2008.

“It’s important for people to understand that UAB made an institutional commitment to establish the Comprehensive Diabetes Center, and they didn’t do that randomly,” LaRussa said. “Dr. Shalev and the team she has assembled are world-class, which gives the center immediate credibility. That’s one of the mandates David and I both had when this all started.” 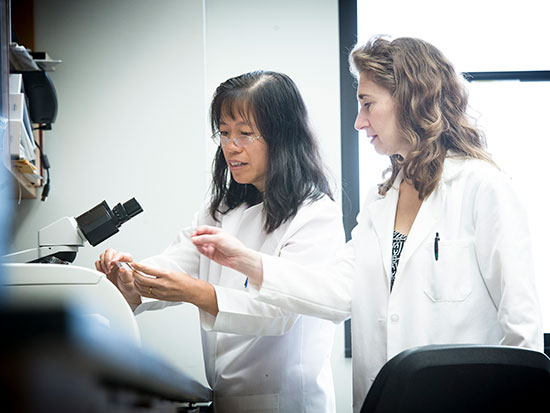 Anath Shalev, M.D., (right) directs researchers in the UAB Comprehensive Diabetes Center who are engaging in cutting-edge investigative efforts into the causes and mechanisms of diabetes.Shalev is passionate about the work she and her team are doing in the field of diabetes. Their research has already shown that the common blood pressure drug verapamil completely reverses diabetes in animal models, and she says this philanthropic donation will enable more advances in the field. “This gift allows us to accelerate our efforts, broaden the scope of our work and bringing us a major step forward,” she said.

“We currently have more than 250 faculty members and about an additional 170 trainees,” Shalev said. “So far, we have developed a very strong collaboration across disciplines and have expanded particularly the area of cardiovascular disease as it relates to diabetic heart disease. These funds will help increase the number of faculty even further, and will allow us to expand the area of diabetes complications research into other organ systems like the kidney and eye to ultimately improve quality of life of those affected by diabetes.”

That second effort involves overcoming a major hurdle in the field of diabetes: finding a reliable measure of functional beta cell mass in humans. Beta cell mass regulation is critically important to understanding diabetes, which is a disease characterized by a near-absolute (Type 1) or relative (Type 2) deficiency in the number of pancreatic beta cells.

“Currently, if we want to assess how many functional beta cells an individual has, we have to put them through a rigorous and time-consuming process with multiple blood draws over several hours, and that only gives us an estimate of the functional beta cell mass,” Shalev said. “That is not an ideal process, and it is why we’re looking for some easily measurable biomarkers so we can better monitor natural disease progression and, even more importantly, assess the effectiveness of novel treatment approaches that target beta cell loss as the underlying cause of diabetes.”

Shalev and her team at UAB, as well as Aldag, McLean, Silverstein and LaRussa, agree that everyone in the field of diabetes research is working toward one goal: curing the disease.

“When we started this company in 2003, we always had the intent to give back to the communities in which we work,” Aldag said. “Birmingham is where our company is headquartered, and the opportunity for us to give back and be a part of potentially finding a cure for diabetes is truly wonderful.”

They are certain UAB will play a major role in ultimately finding a cure for diabetes.

“UAB is a highly regarded medical research center throughout the world, and the brightest minds in all the medical fields are right here in Birmingham,” LaRussa said. “With the collaborative environment at UAB that can ‘crack the code’ toward finding a cure, it makes all the sense in the world of why we have this center here.”

For more information on giving to the UAB Comprehensive Diabetes Center, contact Erica Hollins, senior director of Development, at ehollins@uab.edu">ehollins@uab.edu or (205) 996-6839.