Last unknown structure of HIV-1 solved, another step in efforts to disarm the AIDS virus

by Jeff Hansen
This structure will further explain how the virus infects human cells and how progeny viruses are assembled, and it may be a point of attack to disarm the virus. 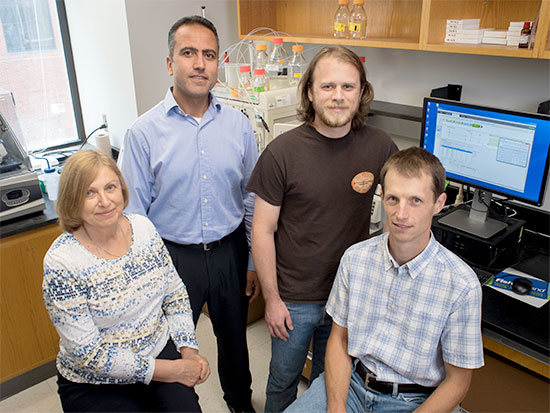 From left: Alexandra B. Samal, Jamil S. Saad, R. Elliot Murphy and Jiri Vlach.A University of Alabama at Birmingham team led by Jamil Saad, Ph.D., has solved the last unknown protein structure of HIV-1, the retrovirus that can cause AIDS.

Knowledge of this structure, called the cytoplasmic tail of gp41 protein, will help researchers further understand how the virus infects human cells and how progeny viruses are assembled and released from infected cells. The cytoplasmic tail appears to play a key role in virus assembly to help incorporate the envelope spike structures into the surface of viral particles.

“If we are able to inhibit incorporation of the envelope protein, we inhibit viral replication,” Saad said. “This would disarm the virus and prevent disease. The cytoplasmic tail is a critical component of infectivity.”

The structure of the cytoplasmic tail of gp41 was a tremendously difficult task to solve, says Saad, an associate professor of microbiology at UAB.

“It was the most challenging project I have encountered in the past 20 years. Many times I was about to quit, but I have a very persistent lab group.”

Saad knows of many other research groups that were unable to determine the molecular structure.

One problem for Saad and his UAB colleagues came as they tried to express the cytoplasmic tail of gp41 in growing E. coli cells. Instead of intact product, a bacterial enzyme was cutting the protein during protein expression. “We have never seen this for any other protein,” Saad said. The researchers found that they had to limit protein expression to just two hours. Even then, 70 percent of the cytoplasmic tail was cut and only 30 percent was left intact.

It took over two years and efforts with 100 different conditions to get good product, Saad says. “Now we can make it in two days.”

The cut turned out to be useful. One piece was soluble, and the Saad group was able to examine its structure using nuclear magnetic resonance, or NMR. The other piece was insoluble, so the researchers had to use a solution of micelles — dispersed lipid or detergent-like aggregates in a solution — to let the insoluble piece form its structure within a membrane-like environment. Like the growth conditions, the researchers needed many trials to find proper membrane conditions. A micelle solution is somewhat similar to vinegar and oil after one has shaken it hard to disperse tiny oil droplets throughout the dressing. 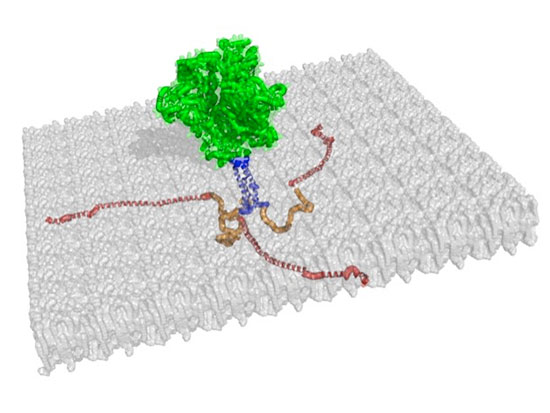 Cytoplasmic tail of gp41 The structures of three membrane-associated cytoplasmic tails of gp41 are shown in red and orange, from this illustration of the trimeric spike structure. The rest of this HIV-1 envelope protein, which is docked on a gray membrane, are the structures of gp120 and gp41, shown in green, and the transmembrane segment, shown in blue. Credit: Jamil SaadAgain, NMR was used to solve the insoluble structure while incorporated into micelles.

When the Saad group put molecules of the intact, full-length cytoplasmic tail of gp41 into the micelle solution, they found that the structures of each of the pieces were maintained in the intact structure.

Saad says the structure opens up whole new areas of research: How the cytoplasmic tail stabilizes the envelope protein structure, how it affects membrane mobility of the envelope protein structure, and how it helps coordinate membrane-binding and the association of 2,000 HIV-1 Gag polyproteins underneath the membrane surface. The Gag polyproteins are later cut inside the maturing virus to form multiple smaller matrix, capsid and nucleocapsid proteins that produce the condensed viral core.

Saad says knowledge of the gp41 cytoplasmic tail structure will also open comparative studies of 10 different retroviruses that have similar tails to learn why some tails are shorter and some tails are longer.

“The cytoplasmic tail of gp41 has been of interest for a long time, and nobody understands how it functions in infection or how it helps incorporate the envelope protein into the membrane,” Saad said.

Co-authors with Saad of the article, “Solution structure and membrane interaction of the cytoplasmic tail of HIV-1 gp41 protein,” published in the journal Structure, are R. Elliot Murphy, Alexandra B. Samal and Jiri Vlach, UAB Department of Microbiology.

This study was supported by National Institutes of Health grant GM117837, and a UAB Center for AIDS Research grant from NIH, AI027767.