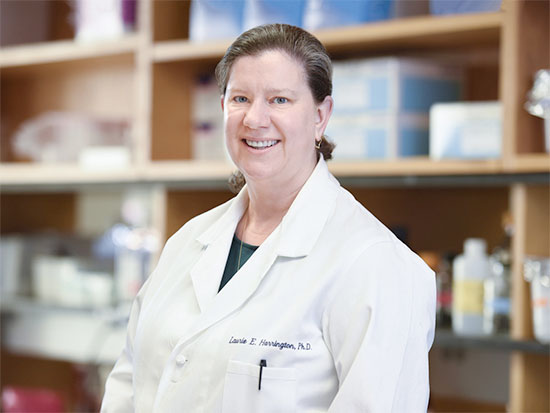 Laurie Harrington, Ph.D.In preclinical experiments, Laurie Harrington, Ph.D., and colleagues at the University of Alabama at Birmingham have discovered a subset of immune cells that create and sustain chronic inflammatory bowel disease. These cells could become potential therapeutic targets to ameliorate or cure Crohn’s disease and ulcerative colitis.

Furthermore, if this subset of CD4 T cells plays a similar role in other autoimmune diseases, such as Type 1 diabetes, multiple sclerosis or rheumatoid arthritis, they could also be targets for therapy.

“We think these cells could be in a number of auto-inflammatory diseases,” said Harrington, an associate professor in the UAB Department of Cell, Developmental and Integrative Biology. “Our hope is, if we could treat these cells, it could be curative.”

Inflammatory bowel disease, or IBD, has two forms: Crohn’s disease, which can affect any part of the gastrointestinal tract but most often occurs in the lower small intestine; and ulcerative colitis, found in the large intestine and rectum. In both, prolonged inflammation damages the GI tract, accompanied by symptoms that include persistent diarrhea and abdominal pain.

IBD is an autoimmune disease caused by a dysfunctional immune response, yet the mechanisms of how the immune cells cause chronic inflammation and pathology are unknown. In IBD, the cytokine interferon-gamma is abundantly produced by a type of immune cells called CD4 T cells, yet there is conflicting information about the role of interferon-gamma in the disease.

The immune system in mammals functions via an exquisite series of interactions among a large cast of different immune cells. The goal is to trigger a response that will identify and eliminate infecting bacteria or viruses, and then turn off that response when the infection is gone. At the same time, the immune response is not supposed to attack a person’s own cells, a harmful attack that is called autoimmunity.

As an example, effector CD4 T cells are progenitors that can differentiate into various types of T-helper cells that are found in IBD.

In a mouse model of colitis, Harrington, first author Boyoung Shin and colleagues found that effector CD4 T cells exist in a spectrum of differentiation states, and the pathogenic potential of the cells was directly linked to the differentiation status.

In contrast, it was the interferon-gamma-negative CD4 T cells that were pathogenic. Those cells were capable of eliciting and maintaining intestinal inflammation. That group showed a stem cell-like transcriptional signature, which supports the capacity to self-renew and resist the programmed cell death, called apoptosis. They also continually seeded terminally differentiated, interferon-gamma-producing cells in the inflamed intestine.

The researchers also identified a glycosyltransferase enzyme in the interferon-gamma-negative CD4 T cells that positively regulated a transcription factor involved in stemness.

Similar to the Harrington study, a different group of researchers recently found there is a distinct subset of CD8 T cells that sustains the control of chronic viral infections, and this unique cell population is distinguished by its stem-like qualities.

At UAB, Darley-Usmar holds the Endowed Professorship in Mitochondrial Medicine and Pathology.

The UAB Multiple Sclerosis Center fosters research, clinical and educational activities in the area of neuroimmunology and Multiple Sclerosis. Multiple Sclerosis Center faculty and staff focus on promoting the discovery of novel treatments for MS through basic, translational and clinical research, training the next generation of scientists and clinicians about the disease, and facilitating the application of these discoveries to clinical care of patients. The center's Research Acceleration Fund is dedicated to advancing the most promising MS research and supporting high-risk/high-reward projects with the potential to discover new treatments.