by Jeff Hansen
A gene called TXNIP was the answer, and it led to a drug called verapamil and a successful diabetes trial. 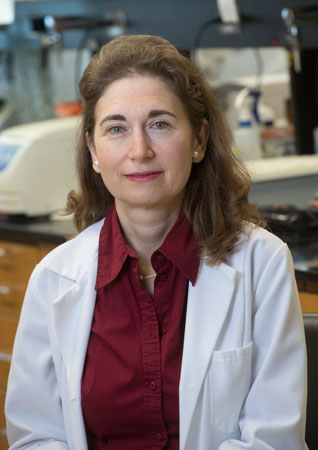 Anath Shalev, M.D.Anath Shalev, M.D., has bridged a gap that few biomedical researchers achieve — moving from basic lab bench research to a clinical therapy that improves patient health. She has done this for Type 1 diabetes.

It has taken more than 16 years.

She began nearly two decades ago with a simple question: What human pancreatic gene in the insulin-producing islets is most turned on by high levels of glucose, a metabolic hallmark of diabetes?

The answer has led Shalev — a University of Alabama at Birmingham endocrinologist and director of the UAB Comprehensive Diabetes Center — on a long journey. In the lab, working with mouse, rat and human pancreatic cells, she has discovered and described new cellular pathways in the beta cells of the pancreatic islets that can lead to diabetes progression or to diabetes protection.

This laid the groundwork for the first human trial of a potential diabetes drug with a mode of action different from any current diabetes treatment. The results, published this week in Nature Medicine, showed that the drug was able to lower insulin use and better maintain blood glucose stability in adults with recent onset Type 1 diabetes. The drug, verapamil, boosted beta cell function and insulin production in adult participants — making it the first discovery to target diabetes this way.

Better diabetes treatment is a great need. This disorder, characterized by elevated blood sugar, afflicts one of every 10 U.S. adults and doubles the risk of early death. More than 30 million people in the United States have diabetes; it is the seventh-leading cause of death, and it also leads to blindness and lower-limb amputations.

Beta cells are critical in Type 1 and Type 2 diabetes. Diabetes increases the programmed cell death of these insulin-producing cells, but the trigger for that programmed death was unknown.

TXNIP, pronounced “tix-nip,” was the beta cell gene that responded to high glucose in Shalev’s experiment more than 16 years ago, as described in her 2002 study. The TXNIP protein was known to control oxygen radicals in many types of cells, but it was not known as an important actor in beta cell biology.

Yet the beta cell TXNIP response to glucose was intriguing because TXNIP was known to inhibit thioredoxin. Work by others had previously shown that overexpression of thioredoxin prevented experimental diabetes by inhibiting the programmed cell death, or apoptosis, of islet beta cells.

Over the next dozen years, Shalev studied how TXNIP acts in beta cells at the molecular level. Her work was guided by the belief that understanding those molecular mechanisms could point to new diabetes treatments.

This research journey was a long succession of small steps, as the basic science moved closer and closer to potential clinical impact.

In 2005, the Shalev team reported that beta cell TXNIP levels are higher in mouse diabetes models and that experimentally increasing TXNIP levels in rat beta cells led to increased programmed cell death by triggering apoptosis. Shalev also found that sugars in general, whether metabolized or not, turned the TXNIP gene on.

That clue helped identify the carbohydrate response element, or ChoRE, in the TXNIP promoter as a regulator of TXNIP.

In 2008, Shalev and colleagues reported on experiments using engineered mice that had little or no TXNIP in their beta cells. These mice also had a mutation that makes them become obese and develop severe diabetes at 4 to 5 weeks of age, suffer beta cell apoptosis and have short lives. The researchers closely watched these mice to see if the lowered amounts of TXNIP would alter the course of their diabetes.

“We went down to the mouse house to see if the mice were getting diabetes,” Shalev said of her “aha” moment. Blood tests showed the blood glucose levels were not rising — the mice appeared to be protected from diabetes. “We were ecstatic!”

The mice lived a long time. This protective effect from lacking TXNIP suggested the protein, when present in normal mice, must play a role in developing diabetes.

In 2012, the Shalev group tested verapamil, an oral blood pressure drug already approved for adults that they had earlier found to reduce levels of TXNIP in heart cells. Verapamil is a calcium channel blocker used primarily to treat high blood pressure.

This led to another “aha” moment — verapamil was able to reverse some effects of diabetes.

“That was a major breakthrough for us,” Shalev said.

It meant that verapamil could enhance beta cell survival and function after disease onset and even in the face of severe diabetes.

A microRNA and two new pathways

In 2013, TXNIP was shown to play another crucial role in beta cell biology.

The Shalev laboratory team discovered that high levels of TXNIP blocked insulin production in beta cells, using a newly identified pathway. TXNIP, they found, induced a microRNA called miR-204, and miR-204 down-regulated the MAFA transcription factor needed to promote transcription of the insulin gene. This meant miR-204 could offer another target for a future RNA drug.

In 2017, Shalev reported another role for miR-204 in diabetes. miR-204 regulates GLP1R, the cell surface receptor that is the target of many of the newer Type 2 diabetes drugs, such as Byetta, Victoza, Trulicity, Januvia, Onglyza and Tradjenta. Activation of GLP1R with these drugs helps the beta cell produce and secrete more insulin.

Greater GLP1R expression is beneficial because it helps transfer a signal to the beta cell to secrete more insulin, such as after a meal. Also, many of the newer diabetes drugs act as agonists to activate GLP1R. Thus, higher expression could lower the drug dose needed to treat diabetes, which would reduce dose-dependent side effects.

In 2014, Shalev had reported that TXNIP — surprisingly — could induce its own transcription. Her UAB research team found that experimentally elevated TXNIP levels in beta cells caused decreased phosphorylation of the ChoRE binding protein, which led to its increased entry into the nucleus and its increased binding to the TXNIP promoter to boost TXNIP transcription. This created a harmful positive-feedback loop.

“TXNIP levels rise over time,” Shalev explained in 2014, “not only as a result of elevated blood glucose levels, but also as part of a vicious cycle by which increased TXNIP levels lead to more TXNIP expression and thereby amplify the associated detrimental effects on beta-cell biology, including oxidative stress, inflammation, and ultimately beta cell death and disease progression.”

Now her 16 years of TXNIP study and discovery of new beta cell pathways — all starting from that simple question — have allowed Shalev to start translating these findings from the lab bench into the development of novel treatment approaches for individuals affected by Type 1 diabetes and to conduct a clinical trial.

As reported this week, the randomized, double-blind, placebo-controlled human trial — funded by a $2.1 million grant from JDRF, the largest charitable supporter of Type 1 diabetes research — found that adding once a day oral verapamil for one year to a standard insulin therapy had beneficial effects in adult individuals who had developed Type 1 diabetes within the previous three months. These beneficial effects were consistent with the Shalev lab’s earlier basic research findings in cells, islets and diabetes mouse models.

Future work will be needed to explore verapamil’s impact on children with Type 1 diabetes and verapamil’s effect on people with Type 2 diabetes. In mouse models and in retrospective epidemiological studies of people taking verapamil for high blood pressure, though, the drug has already been associated with lower risk of developing Type 2 diabetes and better blood sugar control.

“We are excited by the current findings and committed to continuing to work hard to find the best possible treatment for each individual affected by diabetes,” Shalev said.