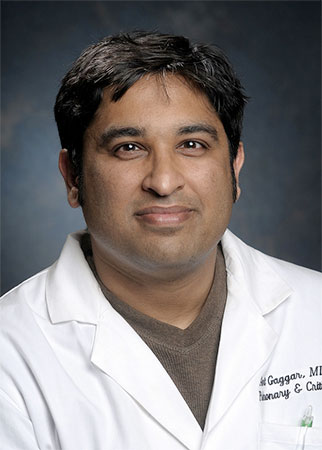 Amit Gaggar, M.D., Ph.D.A single layer of endothelial cells and extracellular matrix lines the inside of blood vessels, like the inner tube inside a bicycle tire. Injury and inflammation can damage this thin layer, allowing a dangerous leakage of fluid from blood vessels to tissues. When this happens in the lung it can lead to acute respiratory distress syndrome, or ARDS, a major cause of death in hospital intensive-care units.

In a paper published today in Science Advances, University of Alabama at Birmingham researchers identify for the first time a new mechanism for this increased permeability, and they also show the ability to block it in cell culture, animal disease models, and in human specimens from patients with ARDS.

In the future, this discovery could lead to therapy to target ARDS, and also other human diseases that have extracellular matrix turnover and blood vessel leakage, including reperfusion of organs after they have been cut off from oxygen, lung vascular disease, kidney injury and heart attacks. In all of these, the critical biological function of the endothelium is altered by inflammation or disease.

Key to this new mechanism of blood vessel permeability is a small peptide called “acetylated proline-glycine-proline” (N-α-PGP). The UAB researchers have discovered that N-α-PGP is a critical regulator of endothelial permeability, and its signal couples extracellular matrix fragmentation to that leakage.

When tissue is damaged or infected, part of the inflammatory response is the release and activation of proteases that degrade the collagen of the extracellular matrix; the matrix is made up of secreted molecules that help glue endothelial cells together. One of these degradation products is N-α-PGP.

N-α-PGP has long been known to act as a signal that attracts neutrophils — the white blood cells that are the first line of defense to engulf infecting bacteria or respond to injury — thanks to seminal work conducted by Roswell Pfister, M.D., and J. Edwin Blalock, Ph.D., at UAB. The N-α-PGP acts on the neutrophil’s CXC chemokine receptor 2 (CXCR2). Since endothelial cells also have those receptors, the senior co-authors — Rakesh Patel, Ph.D., UAB Department of Pathology, and Amit Gaggar, M.D., Ph.D., UAB Department of Medicine — decided to test whether N-α-PGP might also act as a signal upon endothelial cells. Now, they and colleagues report the first evidence that N-α-PGP acts on the endothelial cell CXCR2 receptors and activates the downstream signaling that is seen for other pathogenic factors that disrupt vascular permeability.

Several of their experiments had vivid results. The endotoxin LPS (lipopolysaccharide) is a potent mediator of septic shock, but it does not act directly on the CXCR2 receptor. In mouse models, the local administration of N-α-PGP caused a vascular leakage, and the systemic administration of N-α-PGP caused increased lung permeability — both similar to the effects of local or systemic LPS. When the researchers gave the mice a combination of LPS and the peptide RTR (arginine-threonine-arginine), which inactivates N-α-PGP through binding, the RTR blocked the LPS-induced blood vessel permeability.

This showed a role for N-α-PGP as a novel effector of endotoxin-induced injury.

“LPS is a very generic sledgehammer,” Gaggar said. “The fact that you could attenuate that was eye-opening.”

“That tells us that this is important in vivo,” Patel said.

The other vivid experiment was in cell cultures with ARDS patient samples. The research team showed that blood plasma from ARDS patients increased the permeability of endothelial cells in vitro; but if RTR was added to the plasma, it blocked about 15-20 percent of that increased permeability — presumably by acting on N-α-PGP.

“As a clinician,” said Gaggar, a pulmonologist who cares for patients in the ICU setting, “I find it very exciting to think there is something that is targetable that might become a therapy for ARDS.”

The title of the paper is “The matrikine N-α-PGP couples extracellular matrix fragmentation to endothelial permeability.”