by Shannon Thomason
Misunderstandings and tantrums abound when the four members of the self-absorbed Bliss family each invite a guest for the weekend. 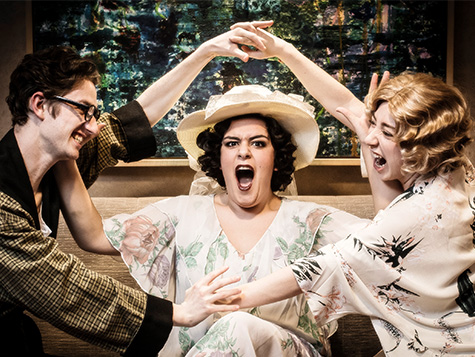 Misunderstandings and tantrums abound when the four members of the self-absorbed Bliss family each invite a guest for the weekend. Coward’s beloved play is a delightful mix of high farce and comedy of manners.

Theatre UAB is the performance company of the College of Arts and Sciences’ Department of Theatre.

“Hay Fever” was written in 1925, during a frivolous period of excess and denial nestled into a 10-year period between the horrors of World War I and the crushing economic realities of the Great Depression. Known as The Jazz Age, it was characterized by an opening up of social constraints, especially regarding the freedoms of women. Swinging music, wild parties, the dropping of traditional etiquette, living for the moment and blatant displays of social irreverence were commonplace in a period that used unselfconscious excess to blot out the atrocities of “The Great War,” says “Hay Fever” director Dennis McLernon.

The Bliss family is composed of matriarch Judith, a recently retired and publicly acclaimed stage actress; David, her husband, a well-known novelist; Simon, their son, an incorrigible and budding artist; and Sorel, their daughter, striving to rise above her bohemian family but always ready to play the game whenever it presents itself. Coward explored the traditions of family life and the social masks that accompany them and turned them upside down in “Hay Fever.”

To bring this all to life, he constructed a very simple plot structure: Each member of the family has invited a guest up for the weekend, without informing the other members of the family. This immediately generates hurt feelings, over-dramatic reactions and raucous conflict, all of which the Bliss family appear to thrive upon.

The cast is Clara Holmes of Grand Blanc, Michigan, as Judith; Brett Everingham of Atlanta as Simon; Rachel Biggs of Lubbock, Texas, as Sorel; Evan Wilson of Homewood as David; Anna Whitlock of Alabaster as Clara; Marissa Hebson of Pinson as Myra; David Parker of Birmingham as Richard; Tanier Dutton of Carbon Hill, Alabama, as Sandy; and Anna Frey of Oneonta, Alabama, as Jackie.