by Shannon Thomason
Since UAB’s first festival in 2003, these roller-coaster evenings have featured a variety of short comedies and tragedies, each performed in about 10 minutes. 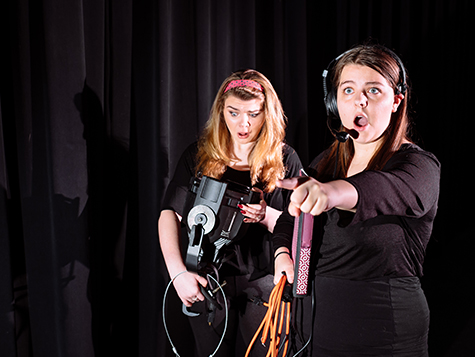 L-R, Margaret-Anne Clark of Florence and Farryn Owens of Seymour, Tennessee, in “The Show Must Go On” by theater major Rita Pearson-Daley See eight plays in one evening at the Festival of Ten-Minute Plays, happening March 4-8 at the University of Alabama at Birmingham.

The festival is presented by the College of Arts and Sciences’ Department of Theatre. Since UAB’s first Festival of Ten-Minute Plays in 2003, these roller-coaster evenings have featured a variety of short comedies and tragedies, each performed in about 10 minutes.

“This year, we have eight plays,” said Lee Shackleford, festival producer and associate professor in the Department of Theatre. “Six of them were written by students in my playwriting classes, and the other two I discovered through the regional contests I’m often asked to judge.”

The festival takes place in the Odess Theatre in UAB’s Alys Stephens Performing Arts Center. The performance begins at 7:30 p.m. each night. All tickets are $5. Call 205-975-2787 for tickets or go to www.AlysStephens.org. The festival often plays to sold-out audiences, so arrive early for a seat. The plays do contain strong adult language and situations. Visit Theatre UAB online at www.uab.edu/cas/theatre.

Two of the plays will be directed by UAB Department of Theatre students as well. The plays written at UAB are:

Shackleford says “The Show Must Go On” holds a special place in the festival.

“It’s a backstage farce, a funny play about all the ridiculous things that can happen behind the scenes on a play, and it was written by designer and stage manager Rita Pearson-Daley, who is definitely speaking from experience. I think it’s the first time any student has written a play for the festival based so profoundly on their own life experiences.”

Shackleford will direct both of the shows written by students from other universities. One has the provocative title “Yes, Officer, I Can Tell You Exactly What Happened” and was written by Lisa Shaffer, a student at Pennsylvania’s Millersville University.

The second play from another university is “I’ll Take Care of You,” written by Shane Strawbridge, a student and teaching assistant at Texas Tech University. This script was the Region IV winner of the 2018 Kennedy Center American College Theatre Festival’s Short Play Competition.

“When you see this show, you’ll understand why it won,” Shackleford said.

The UAB Festival of 10-Minute Plays will also feature the work of the “unseen heroes” of theater: the stage managers and lighting designers.