by Shannon Thomason
Theatre UAB brings the story to life with an elaborately crafted elephant puppet, original music, dance, a dazzling array of costumes, artistic projections that whisk the action from St. Louis to the Congo and more. 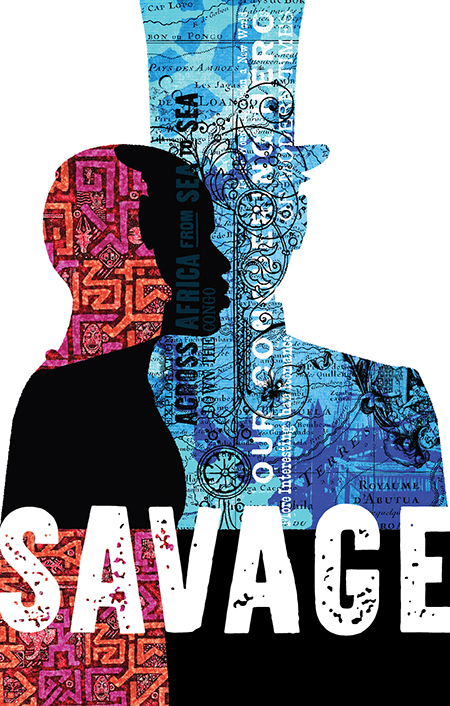 will present “Savage,” an original musical based on the true story of Ota Benga, a Mbuti man put on exhibition in the United States in the early 1900s, with world premiere performances April 10-14 at the University of Alabama at Birmingham.

UAB Professor of Theatre Karla Koskinen conceived and developed the musical with a skilled team, and the story is replete with an elaborately crafted elephant puppet, actors playing multiple characters, original music, dance, a dazzling array of costumes, artistic projections that whisk the action from St. Louis to the Congo and more. Composers Tommy Newman and Jaime Lozano created the show’s music, and Newman wrote the book and lyrics. Students and faculty in the College of Arts and Sciences’ Department of Theatre are bringing it to life on stage.

The musical blends fiction and history with dance, traditional African Congo music and ragtime with contemporary melodic and rap styles. It is the startling, true tale of Benga, taken in the early 1900s from Africa by missionary and anthropologist Samuel Verner for exhibition at the St. Louis World’s Fair and, later, The Bronx Zoo. Displaced and cruelly exploited for his physical characteristics, including his skin color, short stature and ritually filed teeth, Benga is left to marginally exist in a world he does not understand, never able to return to his homeland.

Explore the production and the process of creation, read the blog, and buy tickets at https://cas.uab.edu/savagetheplay/.

This project has been made possible by grants from the Alabama State Council on the Arts, the National Endowment for the Arts and the National Alliance of Musical Theatre.

“Savage” is directed by Koskinen and Valerie Accetta, with musical direction by Carolyn Violi and choreography by Roy Lightner. Translations were provided by Kazadi Wa Mukuna, Ph.D., and native speakers of Chiluba, the language that Benga spoke.

The production has provided innumerable opportunities to students, both as performers and as crew members, to create the show from start to finish. Students have been involved assisting in direction, choreography, costume design and creation, set design, dramaturgy, and as documentarian of the entire process. This innovative production is included in UAB’s “50 Years of Dreams and Discoveries” celebration this year.