by Shannon Thomason
A compassionate and stimulating study of sexuality and intimacy, the Tony-nominated play is set in late 19th century, middle-class America, when “female problems” often were dismissed as “hysteria.” 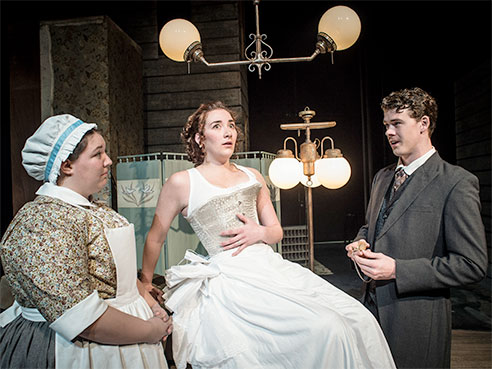 A fanciful, compassionate and stimulating study of sexuality and intimacy, the play is set in late 19th century, middle-class America, when “female problems” often were dismissed as “hysteria.” Enter Dr. Givings, who treats the symptoms with a strange, new electrically powered box.

Directed by Assistant Professor Jack Cannon, performances are set for 7:30 p.m. Feb. 18-21 and at 2 p.m. Sunday, Feb. 22, in UAB’s Alys Stephens Performing Arts Center, 1200 10th Ave. South. Because of the nature of live theater and the individual perceptions of audience members, this production comes with a content warning: It contains adult situations, sexual content and perceived partial nudity. General admission tickets are $12 and $15, $6 for students, and $10 for UAB employees and senior citizens. For tickets, call 205-975-2787 or visit Theatre UAB online at www.uab.edu/cas/theatre. The Department of Theatre is part of the UAB College of Arts and Sciences.

“In the Next Room” is set in a prosperous spa town outside of New York City in the 1880s. It is the dawn of the age of electricity, contrasted against a society of strict social and moral standards, Cannon says. At the center of this world is a newly married couple, Catherine and Dr. Givings. The good doctor, son of a famous abolitionist and a leader in both the medical and social communities, opens a new home office where he treats the condition of women’s hysteria with a newly invented medical device, the vibrator. However, Dr. Givings, capable of healing the physical and emotional needs of his patients, remains emotionally distant and impassive to the very same needs of his spouse.

What the world and her husband refuse to tell her or allow her to experience Catherine can and will discover on her own, Cannon says of the character. She embraces the world innocently, without any preconceived notion of the restrictive morality placed upon her by a husband who hesitates in the expression of intimacy. It is left to Catherine to heal her doctor and awaken him to the intimacy and full expression of love shared between two people without shame.

Playwright Sarah Ruhl puts it this way: “The play is not a sex farce about vibrators. It’s about wet nurses; it’s about the body. … In terms of sexuality, I was aiming less for self-consciousness than for a kind of innocence. In some ways, people then were innocent of sexuality compared to the biological knowledge we’ve acquired about the subject since. … Ultimately, the play is about intimacy.”

This play was selected for the 2014-2015 season for two reasons, Cannon says. First, female playwrights are in general underrepresented in the seasons of both professional and college theaters. Second, the Department of Theatre faculty believes they have an obligation to expose UAB students and the community to today’s most challenging and provocative plays.

“Not only do such plays address the questions and problems of the society we live in, they provide greater opportunities for our students to grow and mature as artists and actors,” Cannon said. “By choosing the playwright Sarah Ruhl, both goals are achieved with one play.”

Students working on the play researched everything from medical equipment to costumes. Even though a character may seem to be unclothed, there actually is no nudity in this production, Cannon says.

“Characters and actors are always presented in their underwear, even when it may be perceived that they are exposing themselves to another character or the audience,” he said.

“In that moment, the two discover the shared intimacy between husband and wife, without repression, reluctance or questions — a sharing of two souls,” Cannon said.