by Shannon Thomason
This marks the “lucky 13th” year of original plays written, directed and acted by the UAB Department of Theatre’s own students, staff and faculty. 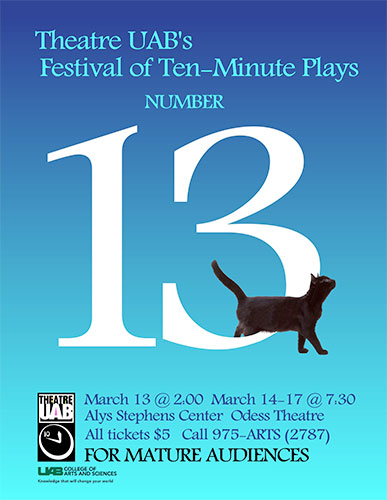 Theatre UAB’s Festival of 10-Minute Plays will take the stage for the 13th consecutive year, beginning with a matinee performance March 13.

The College of Arts and Sciences’ Department of Theatre at the University of Alabama at Birmingham developed the enormously popular annual festival, which each year features new, super-short plays that are smart, edgy, shrewd, shocking and often hilarious. It’s a night of theater the audience discusses long after the curtain drops.

These festivals showcase new and original works, and this time there are seven. Current Department of Theatre majors wrote four of the plays: “Nine Months,” “Don’t Hold Your Breath,” “To Just BE” and “Most Likely.” The other three were written by department alumni: “Corpus Crispy,” “Ad Infinitum” and “39 Years of Peach Cobbler.”

Shackleford teaches several scriptwriting classes, and each year the process begins when his students learn the art and craft of writing super-short comedies and dramas. A 10-minute play is not a skit or a scene, he says; it must have everything that a longer play has, but without the luxury of time.

“In the 13 years we have presented this festival, we’ve produced more than 100 original plays,” Shackleford said. “It’s amazing to think that more than 100 new plays have been written and presented by our students, faculty and staff. I doubt many university theater programs can make that claim. But then, we’ve always been known for doing things other college programs don’t.”

“Most Likely” by Felix Crutcher takes the audience to a high school class’s 10th reunion, where memories, repressed and recovered, have powerful consequences.

“Ad Infinitum” by Scottye Moore asks what living for eternity is really like.

“To Just BE” by Kenya Mims explores the value judgments everyone makes about race, gender, religion, economic status and more.

“39 Years of Peach Cobbler” by Stephen Webb is a dark comedy about regret, commitment and suicide.

“Nine Months” by Daisean Garret pits three potential “baby daddies” against one another.

“Don’t Hold Your Breath” by Mark Nelson draws an unlikely pair together and presents them with one of life’s greatest temptations: escape.

“Corpus Crispy” is a typical play by Daniel Martin in the sense that absurd people get ridiculous notions in their heads and commit to them, heart and soul.