by Shannon Thomason
UAB’s Undergraduate Immunology Program, a collaboration between the School of Medicine and the College of Arts and Sciences, is designed to train the next generation of students in research and the health professions. 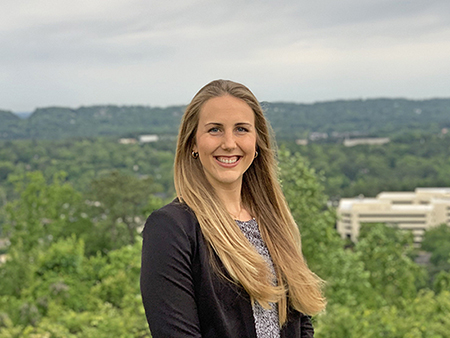 Peyton BlaylockWhen an adviser told nursing student Peyton Blaylock that immunology was a new major at the University of Alabama at Birmingham, Blaylock did a double take.

Previously, Blaylock had written goals about things she had hoped to accomplish as a young person just making her way into the world. Little did she know one of those goals, taking an immunology class, would change her entire career trajectory.

Now Blaylock will be the first graduate of UAB’s Undergraduate Immunology Program, a collaboration between the School of Medicine and the College of Arts and Sciences that launched in fall 2017. It is one of a handful of such programs at universities in the United States.

The Undergraduate Immunology Program, a joint-health program sponsored by the Department of Biology and the Department of Microbiology, offers an interdisciplinary four-year curriculum. Courses in the major focus on current topics in immunology, the innate immune system, the adaptive immune system, microbial pathogen-immune system interactions and immunologically mediated diseases. The education is broad-based, and students are required to get hands-on experience working in cutting-edge immunology research laboratories to ready themselves for careers in the health professions or research.

This major is designed to train the next generation of students who will go on to pursue careers in research and the health professions, and hopefully lead the fight against the next pandemic should we face such a challenge in the future — which we almost certainly will, says Louis Justement, Ph.D., professor of microbiology and co-director of the Undergraduate Immunology Program. “Peyton is an outstanding example” of the highly motivated students in the UIP who aspire to do great things at the next level, Justement said.

Blaylock, of Vestavia, Alabama, works as an EMT with Regional Paramedical Services. She originally started school at the University of Alabama, studying nursing for three years. With just four semesters left, she had a change of heart. After many discussions with advisers and much thought and prayer, she decided to move home to attend UAB, where she could study, research and be a part of an internationally renowned medical mecca. Immunology and the UIP became an easy choice and proved to be both intriguing and challenging, preparing her for her future career path as a physician assistant.

During her first year at UAB, with direction from Justement, Blaylock helped pioneer, and serve as the inaugural president of, the Undergraduate Immunology Society on campus. The group’s aim is to foster awareness of immunology on campus and build a sense of community among the program’s students.

“I wanted to create a community for students to not only gain academic direction, but also create a fun, warm and friendly environment in which students could form relationships with the people they are going to be with for the next four years,” Blaylock said.

Blaylock works in the research lab of Shinichi Kano, M.D., Ph.D., in neuroscience, immunology and psychology. They are studying the neurobiology of the brain. Blaylock took one of the UIP elective courses on the microbiome: The Microbiome in Health and Immunity with Heather Bruns, Ph.D., associate professor of Microbiology and a co-director of the UIP, which inspired her to start her own research project.

“Peyton is always at the top of every class academically and has a solid understanding of how the immune system works in health and disease,” Bruns said.

Blaylock attended Vestavia Hills High School, where she played varsity basketball. VHHS fully prepared her for college, and likewise, the UIP did the same in preparing her for her next phase in life, she says. College is a really crucial time because it serves as the transition period between high school and the real world.

“Individuals experience a lot of ‘firsts’ in life, and this is really a malleable time that sets the stage for future endeavors,” Blaylock said. “I feel like the Undergraduate Immunology Program professors do a really great job in recognizing where we are in this stage of our lives and facilitating the growth necessary to see us reach our full potential. The UIP has truly been a blessing, and I feel more than equipped to start my next phase in life — PA school.”

Blaylock is now applying to PA schools and, once accepted, will start in August 2021. UAB is her No. 1 choice, followed by Samford and UT Southwestern. She is still undecided about the field she plans to pursue, but emergency medicine and obstetrics/gynecology are on the list.