by Shannon Thomason
Enticed to UAB by a Computer Music Ensemble concert, Birmingham’s Kevin Peek is graduating with a music technology degree and an array of skills to make it in the music business. 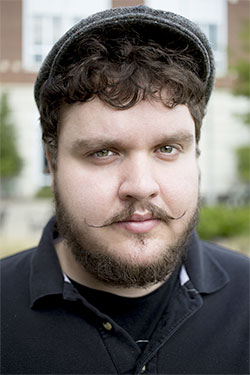 Photo by Jared Jones  If the University of Alabama at Birmingham had a soundtrack, graduating senior Kevin Peek of Birmingham would write it.

A talented composer and music major with a concentration in music technology, Peek is set to graduate April 26. While at UAB, he’s achieved some highly acclaimed accomplishments that many people may recognize: Peek created soundtracks for UAB television commercials and for the TedXBirmingham commercial. He is a Digital Media fellow in the College of Arts and Sciences and was named the 2013-2014 Department of Music’s Outstanding Music Undergraduate. His music degree focuses not only on performance, but on all aspects of being a professional musician, with a spotlight on the technology of modern music composition and editing.

In 2011, Peek, with fellow UAB student and theater major Natalie Kinsaul, wrote 20 original songs for Theatre UAB’s production of “The Caucasian Chalk Circle.” Their work won the 2012 Region IV Kennedy Center American College Theater Festival Sound Design Award, and the National Festival Fellowship, which earned them a trip to the national festival at the Kennedy Center in Washington, D.C. There they worked with professional theater designers and composers.

Peek has composed for and performed on many videos while working with UAB Digital Media. One of his biggest projects was composing original music for UAB’s branding campaign, a student recruitment TV spot “Where Knowledge Begins.” His work was also featured in UAB’s Capital Campaign TV spot, “What Would You Give?” Following recommendations from Scott L. Phillips, Ph.D., co-director of UAB’s music technology program, and Rosie O’Beirne, director of Digital Media and Learning, Peek was commissioned by BLR Further, the advertising agency producing UAB’s new commercials. Because the project was part of his UAB Digital Media Fellowship, he earned course credit as well.

Peek is special for many reasons, says O’Beirne. He is part of the first cohort of UAB Media fellows and the only fellow from the discipline of music.

“Music is the backbone of all the video production work we do, and true to form, Kevin was the backbone of our group,” O’Beirne said. “The success of our visual storytelling depended on Kevin’s creating beautiful audio landscapes, and ultimately it’s the music that shapes the way the audience feels. Kevin is simply a talented and gifted artist, and I have no doubt we will see his name in film and music credits one day. He has set the bar very high for the next music student to take his spot in the media fellowship.”

Peek began teaching himself the guitar at a young age; inspired by pop and video game music, he began crafting his own compositions. His favorite bands include The Beatles and The Beach Boys. He graduated from Calera High School and started out in college as an engineering major, but left after one semester to play in a band. In 2009, he saw a UAB Computer Music Ensemble concert and “decided it was time to go back” to school, he told UAB Magazine.

“Before, I wasn’t aware there was a program in Alabama that actually extensively covered the technical/recording side of music,” Peek said. “I was even more attracted to the program because it still focuses heavily on music theory and musicianship, unlike many music technology programs.”

While working with bands, Peek created a recording studio, Secret Library Recordings, in his home. Peek recently became one of the first UAB music technology majors to attain AVID Pro Tools Certification under UAB’s AVID Learning Partner program. At UAB he also had the opportunity to meet with and play his recordings for Ken Scott, a recording engineer for The Beatles and producer of David Bowie’s album “The Rise and Fall of Ziggy Stardust and the Spiders from Mars.”

“His talent as a musician goes far beyond his ability to play multiple instruments well, which he does,” Phillips said. “His skills using music technology to compose, record, produce and perform music are outstanding. Kevin is easily the most prolific songwriter I have taught in our music technology program. Kevin’s future is very bright. His UAB experiences have helped him develop a professional portfolio that has gotten the attention of professionals in both New York and Los Angeles.”

Peek will continue working with UAB Digital Media through its collaboration with Boutwell Studios until August, and says he wants to continue composing for commercials and videos. He also hopes to compose for video games and film. He plans to write and release his own pop music this summer, and put a band together from among his many music peers to perform the works in town and on the road. In mid-May he will audition for a spot in the Master of Music Technology program at the Manhattan School of Music. All of his work and success have opened doors to a professional career in music, and Peek has his pick of many choices.