by Brianna Hoge
Fernando Ovalle, M.D., has been named director of the Division of Endocrinology, Diabetes, and Metabolism at UAB. 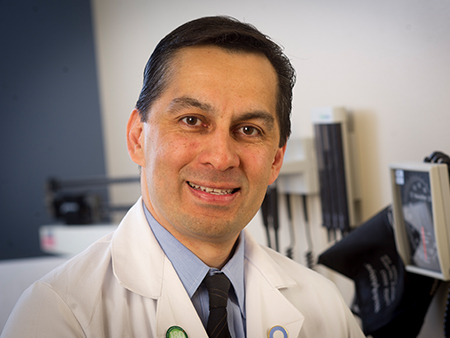 Fernando Ovalle, M.D., has been named director of the Division of Endocrinology, Diabetes and Metabolism at the University of Alabama at Birmingham. He has served as interim director of the division since 2018.

“Continuing to serve our division in this new capacity as director is an honor, and I’m eager to play a part in the growth of our division,” Ovalle said. “I look forward to helping expand our division’s research and clinical arms, providing the utmost care to patients who seek our services.”

Ovalle joined UAB as faculty in 1997, serving as lead diabetologist and professor of medicine. He has held several roles in building the division’s clinical and academic programs, serving as an attending physician at both UAB and the Birmingham Veterans Affairs Medical Center. He has directed UAB’s endocrinology fellowship and the Diabetes and Endocrine Clinical Research Unit for more than 15 years.

In 2008, Ovalle founded UAB’s Multidisciplinary Comprehensive Diabetes Clinic. A few years later, he initiated its Diabetes and Glycemic Control Programs, reducing the incidence of severe hypoglycemia among hospitalized patients nearly 50 percent. In 2017, he became the first associate director for Clinical Research of the Comprehensive Diabetes Center.

“Fernando brings tremendous abilities, enthusiasm and collegiality to this role, and he will lead the division to new heights of excellence in care, education and discovery in the context of a welcoming, inclusive community,” said Seth Landefeld, M.D., chair of UAB’s Department of Medicine.