Dell’Italia honored by VA for decades of research excellence

by Jeff Hansen
The John B. Barnwell Award for outstanding achievement in clinical science research is the highest honor of the VA’s Clinical Science Research and Development Service. 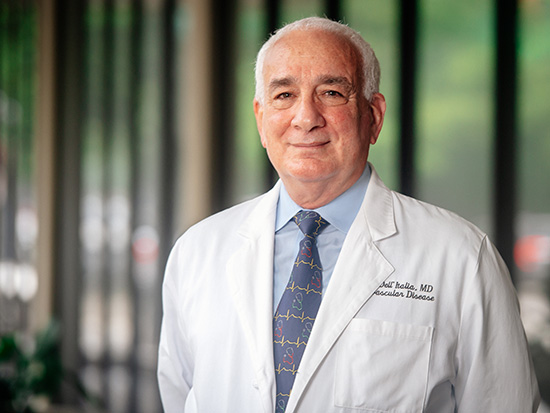 It is the highest honor awarded by the Clinical Science Research and Development Service of the Veterans Health Administration, America’s largest integrated health care system.

“The award recognizes Dr. Dell’Italia’s exemplary record of involvement in, and service to, the Department of Veterans Affairs and to clinical science, as well as for his significant contributions as a scientific leader in ground-breaking contributions to clinical management of veterans suffering cardiovascular disease,” Rachel Ramoni, DMD, Sc.D., wrote in announcing the award. Ramoni is chief research and development officer for the Veterans Health Administration.

Dell’Italia came to the University of Alabama at Birmingham in 1989 as an assistant professor in the Department of Medicine, with a research focus on mechanisms of remodeling of the heart in heart failure and finding other ways to improve function in failing hearts. Later that year, he began his joint appointment at the Birmingham VA Medical Center, which he still holds.

Dell’Italia is best known for his translational research — investigations that start in the lab and in animal models, and then are translated into groundbreaking changes in clinical care for veterans. One of every five patients in the VA health care system has cardiovascular disease, says Douglas Mann, M.D., a professor of cardiovascular diseases at Washington University, St. Louis, who has interacted closely with Dell’Italia since the 1980s.

“I believe that Dr. Dell’Italia is the quintessential translational physician,” Mann wrote in a letter of recommendation for the award. “His work spans targeted animal studies that investigate the cellular, biochemical and molecular mechanisms of cardiac remodeling to translational patient-oriented research that is based on hypotheses generated in his laboratory. In my experience, it is very rare to see the efforts of one person address a research question from a preclinical animal model to studies in humans.”

An example of this translational research was Dell’Italia’s $18 million Specialized Center of Clinically Oriented Research in Cardiac Dysfunction, which was funded by the National Institutes of Health.

Dell’Italia has been funded continuously for 25 years from the Veterans Administration Merit Review and the National Heart, Lung and Blood Institute, and he has been associate chief of staff for Research at the Birmingham VA Medical Center since 2010.

With the Barnwell Award, Dell’Italia will receive $50,000 a year in research support for three years, a cash award of $5,000 and an inscribed plaque commemorating his scientific achievements. The Birmingham VA Medical Center also will receive a plaque honoring Dell’Italia.

A formal presentation is planned later this fall at the Birmingham VA Medical Center.

“Dell’Italia’s scientific leadership and his commitment to improving health care for veterans are clearly reflected in his outcomes-based clinical trials that have changed clinical practice for millions of patients,” Ramoni noted.