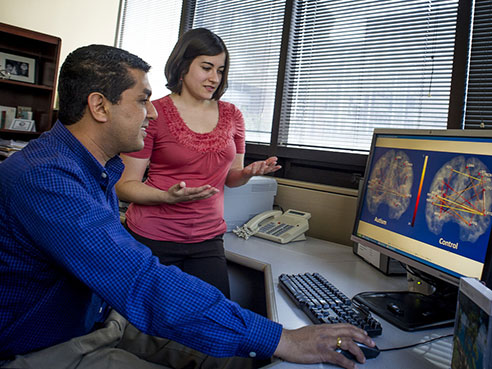 Rajesh Kana and Lauren LiberoIn an ancient Indian parable, a group of blind men touches different parts of a large animal to find what it is. Only when they share the descriptions of an ear, tail, trunk and leg do they know it is an elephant.

Rajesh Kana, Ph.D., of the University of Alabama at Birmingham has brought a similar approach to the classification, and eventual diagnosis, of autism. Kana and colleagues are the first to combine three different measures of the brain — anatomy, the connectivity between different brain regions, and levels of a neurochemical — to distinguish people with autism spectrum disorder (ASD) from matched, typically developing peers. This multimodal approach, published online this week in the journal “Cortex,” is distinct from many previous studies that have used a single neuroimaging measure. While those studies uncovered widespread functional and anatomical brain abnormalities in ASD, the results were not highly consistent, possibly reflecting the complex brain pathology in autism spectrum disorders.

At this time, autism diagnosis is based on behavior. Kana’s multimodal neuroimaging-based classification is a step toward a possible biomarker for autism and possibly diagnosing autism at an early age, perhaps as early as 6 months, when the brain is very plastic and intervention might be more effective. “But that’s a long, long way off,” said Kana, an associate professor in the Department of Psychology in the UAB College of Arts and Sciences and an associate scientist in UAB’s Civitan International Research Center.

This preliminary study needs to be validated with a larger sample, Kana said; but it “emphasizes that the brain abnormalities in autism may not be confined to a single area. Rather, they are distributed across different areas at multiple levels and layers.”

The same MRI machine does all three measurements, using different settings for each. The volume data take 10 minutes, connectivity measurements take12 minutes and the spectroscopy takes 30 minutes. While some participants were comfortable in the tight space of an MRI, others needed training in a nonfunctioning simulator MRI before any testing.

Kana’s group found significant differences in some specific measurements using each of the three neuroimaging approaches. They then combined certain of these key differences into a decision tree model — akin to the differential diagnosis flowchart used by clinicians. This decision-tree model gave a classification accuracy of 91.9 percent for distinguishing ASD subjects from the controls.

“Autism is such a heterogeneous disorder, and every patient presents with different symptoms and levels of severity,” said Lauren Libero, Ph.D., first author of the study. “That makes it really challenging to try to find one explanation within the brain for the very complex symptoms of autism.”

“This study is important,” said Libero who is now a post-doctoral scholar at the University of California-Davis MIND Institute(Medical Investigation of Neurodevelopmental Disorders), “because we found that different combinations of alterations in the brain could lead to the same or different levels of symptom severity. This could explain why previous studies have found varying results when it comes to which areas of the brain are affected in autism. There likely is not one uniform pattern affecting everyone with autism.”

“We also found that combining different MRI techniques led to better classification of our participants with autism,” Libero said. “Most previous studies have focused on using one technique at a time, even though we have evidence that there are alterations in the brain in autism in terms of structure, white-matter connectivity, and brain chemical concentrations. When we are looking at a disorder that is so complex, multiple modalities of investigation can be more efficient to separate autism from other disorders, or to identify subgroups within autism. Our study found a way to combine measures of brain structure, white matter diffusion, and neurochemical concentration to classify our participants by their diagnosis, as well as their level of autism severity.”

This start by Kana and colleagues to unlock the neuropathology of autism needs to be validated using a larger sample of subjects to improve the generalizability of these preliminary findings. Kana also wants to look at lower-functioning ASD subjects, younger ASD children and a larger number of female participants.

Lucina Uddin, Ph.D., assistant professor in the Department of Psychology at the University of Miami, who was not part of the research team, said, "The combination of multiple neuroimaging modalities is a clear strength of the current study, and the authors are to be commended for undertaking the difficult task of trying to reconcile results from methods designed to tap different aspects of brain structure and function. Although the classification results are promising, application to new and larger datasets will be critical for testing how well the classifier built here deals with new cases. In addition, it will be interesting to see whether data collected from much younger children can be classified using this method, as the disorder typically emerges in the first few years of life.”

Just three of these significant differences — radial diffusivity in the right forceps minor, cortical thickness in the left pars opercularis and fractional anisotropy in the left forceps minor —yielded the best decision tree for distinguishing ASD participants from controls.

Kana and colleagues also built a decision tree with five of the significant findings that sorted ASD participants by disease severity.

ASD is a complex disorder of brain development. ASD patients show a triad of impairments: impaired social interaction with others, impaired verbal and nonverbal communication, and impaired play and imaginative activities.