Research goal: Catch the interferons that cause lupus, one cell at a time

by Jeff Hansen
The ability to build a mimic of the interferon-interferon receptor complex allows a hunt for unique monoclonal antibodies. 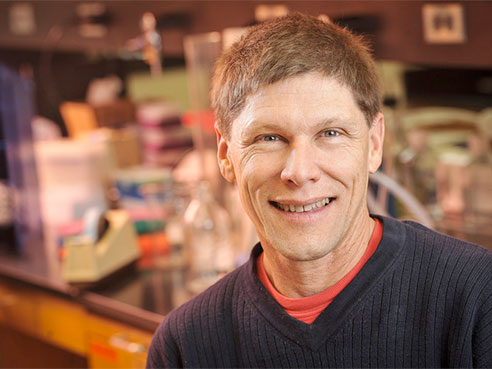 Mark Walter, Ph.D., professor of microbiology in the University of Alabama at Birmingham School of Medicine, is seeking a way to detect — at the level of individual immune cells — exactly which interferons and which cells provoke the disease. This ability would help develop blood tests to diagnose the disease and also measure the effectiveness of lupus treatments. If Walter is able to finger the prime interferon culprits, it will help guide the design of more precise interferon inhibitors to treat lupus, a disease that affects at least 1.5 million Americans.

“If I could tell you what interferons were signaling on a given cell at a given time, that would be pretty phenomenal,” Walter said.

This level of detection requires a difficult leap in cutting-edge technology. Walter’s research is one of 11 high-risk, high-payoff Novel Research Grants recently awarded by the Lupus Research Institute to push the boundaries of discovery and advance innovative new therapies.

Interferon proteins are made and released by cells in the body in order to send a signal to other cells. The signal is delivered when the interferon protein binds to one of the 500 to 1,000 interferon receptors that cover the target-cell surface like docking ports on a space station. This binding sets off a response in the receptor cell that helps launch, continue or diminish an inflammatory response against pathogens such as viruses and bacteria. Thus, interferons are one of the ways that immune cells “talk” to one another.

Walter wants to catch cells at the moment the interferon binds to its receptor, using a specific, laboratory-produced monoclonal antibody. His colleague at the University of Toronto, Sachdev Sidhu, Ph.D., has a library of 100 million different antibodies. Walter has been able to construct a stable biochemical mimic of the signaling complex that Sidhu uses to find the antibody that will “see” only the interferon-receptor complex. From preliminary work with some lupus patient samples — obtained through the UAB Center for Clinical and Translational Science — Walter has “a sliver of evidence that we can do this on cells. … We’ve actually identified binding on a lupus patient sample relative to a normal sample.”

Walter and colleagues expect to spend the next two years finding and optimizing antibodies against 17 different interferons and their receptors. They also will work to amplify the signal from fluorescent markers attached to the antibodies, so that individual blood cells separated by flow cytometry will show a particular color that indicates which interferon or interferons are attached.

“We will have novel antibodies, made in a novel way, to detect something that’s never been observed before,” Walter said. This might provide clinicians new methods to monitor multiple signaling pathways that are activated in autoimmune disease in general and lupus in particular.

When the system has been validated, Walter and collaborator W. Winn Chatham, M.D., professor in the UAB School of Medicine Division of Clinical Immunology and Rheumatology, can then begin to look at blood cells from lupus patients. Lupus mostly strikes women of child-bearing age, and women of color are two to three times more likely to have lupus than those who are white.

“These patients are really amazing,” Walter said. “They just want to see their disease solved.”

“That’s why the Lupus Research Institute funded this study — for its potential,” Walter said. “We’re going to hopefully deliver that.”