by Jeff Hansen
The innate immune systems of plants and plant pathogens are in a biological arms race, and if plants lose, food sources may diminish. Mukhtar probes the genetics and molecular mechanisms of plant immunity. 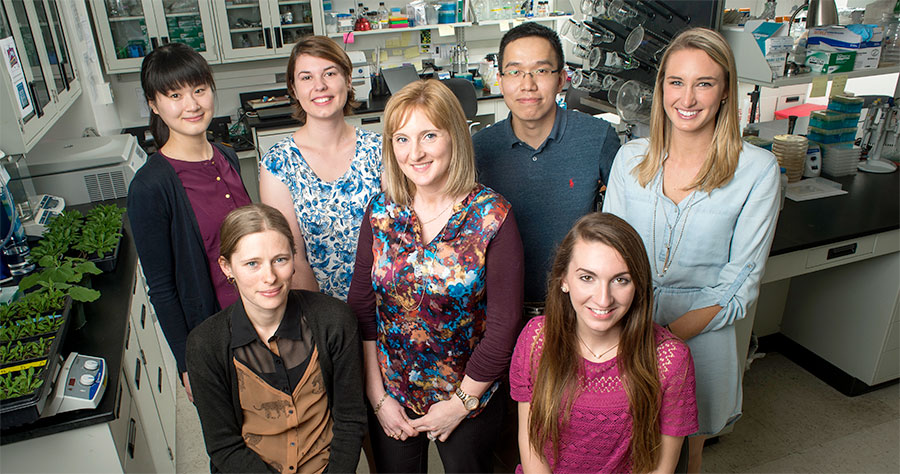 After training at a Max Planck Institute and Duke University, Karolina Mukhtar, Ph.D., brought a new research discipline to UAB — plant immunology. Advances in this science will be crucial to feed a worldwide population that could grow to 9 billion by 2040.

Like humans or animals, plants face attacks from a range of pathogens, including bacteria, fungi and viruses. But plants are not defenseless — they have innate immune systems, an evolutionarily conserved defense against infections that is shared with both primitive and higher eukaryotes, including humans. Mukhtar and other scientists dig deep into the plant genome to learn how it all works and find ways to improve it, using the fast-growing model plant Arabidopsis thaliana.

“In the 1990s, plant research was scattered,” said Mukhtar, an assistant professor in the UAB College of Arts and Sciences Department of Biology. “Tomatoes were studied as a fruit, snapdragons as a flower, and rice as a food crop. Research was being wasted in duplication, so people had a new idea: Let’s agree on one plant that’s going to be the easiest to study.”

Researchers chose the small, springtime, ephemeral flowering plant A. thaliana. “It has the smallest genome of the higher plants, a quick life cycle of two months, and it is incredibly inexpensive,” Mukhtar said. “You can fit a lot of plants in a small space, 72 in a small box.” 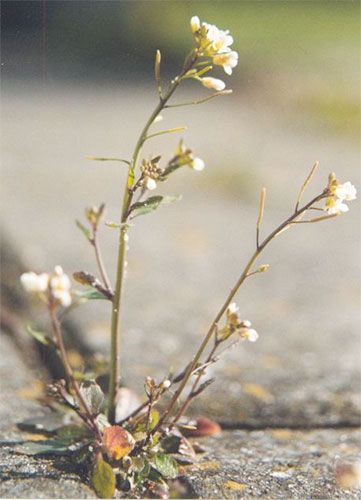 Arabidopsis thaliana. Credit: Wikimedia CommonsA. thaliana was the first plant to have its genome sequenced, a cooperative effort that was finished in 2000, before completion of the human genome. “Since then, things have really taken off,” Mukhtar said. Scientists can probe a database of A. thaliana’s 27,000 genes and the 35,000 proteins that they encode, and the database has links to purchase seed for nearly every mutant and transgenic line that researchers have constructed — at just $10 a vial.

Mukhtar uses the bacteria Pseudomonas syringae as the pathogen. Infected plants are housed in a secure animal facility, even though P. syringae is common in soil and poses no threat to humans.

As with humans and human pathogens, plants and their pathogens have co-evolved in an ever-escalating war for survival, a biological arms race. Plant cells are able to recognize certain molecular patterns on pathogens and trigger a defense response. Those plant cells can also send an alert using chemicals that diffuse throughout the plant — and even to neighboring plants. But some bacteria have learned to stymie this friend-vs-foe recognition by injecting effector molecules that can suppress the plant’s immune response — P. syringae, for example, has dozens of effectors. In turn, plants have responded to this bacterial counterattack by evolving resistance proteins that can recognize certain pathogen effector molecules.

Her current lab group is four graduate students, and two postdocs. She also accepts some carefully screened undergraduate students who commit to multiple semesters of lab work. “The training,” she noted, “is very laborious and also quite costly.”

Her journey to UAB

“I just had to work really hard,” Mukhtar said of her time at the institute. “It was the wildest and biggest fun time in my life. I was able to stay up to 2 a.m. every night. It was amazing.”

The couple left Germany for postdoctoral studies in North Carolina at Duke (Karolina) and UNC-Chapel Hill (Shahid), and then moved to UAB in 2010. As the first and only plant biologist on campus, Karolina Mukhtar had to create — from scratch — a space with greenhouse control.

“I realized the challenge of being the first plant person here,” Mukhtar said. “If you join a big plant program, you will already have a plant culture room and a gardener.”

She had neither. But she was excited by the challenge to install a new discipline at UAB, and her efforts led to the award of a $1.1 million National Science Foundation CAREER Faculty Early Development grant in 2014.

As emerging pathogens pose threats to the world’s food supply, Mukhtar says that basic knowledge gleaned from A. thaliana can be applied at other labs to help protect crops. Mukhtar shows an educational video in her undergraduate plant biology classes that explains how the world may not be able to feed everyone by 2050. One closely watched threat is the slow spread — in Africa and now the Middle East — of a devastating wheat pathogen, stem rust fungus. New forms of the wind-borne Ug99 fungus are able to defeat the plant’s immune system by overcoming two of the resistance genes in wheat cells. This helps the fungus completely destroy a wheat crop, and up to 90 percent of the wheat varieties grown in the world may need to be replaced with strains that can fend off the fungal infection.

“Nearly all wheat in the world is susceptible,” Mukhtar said. “Researchers have a civic duty to come up with an answer.”

“With the world population projected to swell from 7 to 9 billion people by 2040, we will have to sustainably increase our food, fiber and fuel production using less land and fewer resources,” Mukhtar said. “Healthy plants are the key; however, currently up to 30 percent of all crops are being lost annually to various plant diseases. That’s why plant pathologists — or plant doctors — can literally mean the difference between feast and famine.”