Working under pressure: Diamond micro-anvils made by UAB will produce immense pressures to make new materials

by Jeff Hansen
UAB researchers will use pressures greater than those found at the center of the Earth to create as yet unknown new materials. 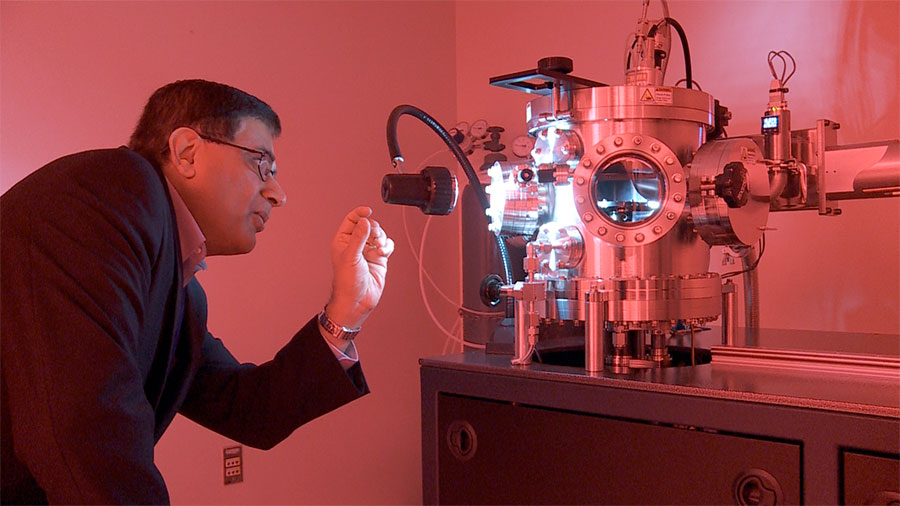 Yogesh Vohra at the Microfab Lab’s sputter machine, which coats the gem diamond in a layer of tungsten.University of Alabama at Birmingham researchers will use pressures greater than those found at the center of the Earth to potentially create as yet unknown new materials. In the natural world, such immense forces deep underground can turn carbon into diamonds, or volcanic ash into slate.

The ability to produce these pressures depends on tiny nanocrystalline-diamond anvils built in a UAB clean room manufacturing facility. Each anvil head is just half the width of an average human hair. The limits of their pressure have not yet been reached as the first 27 prototypes are being tested. 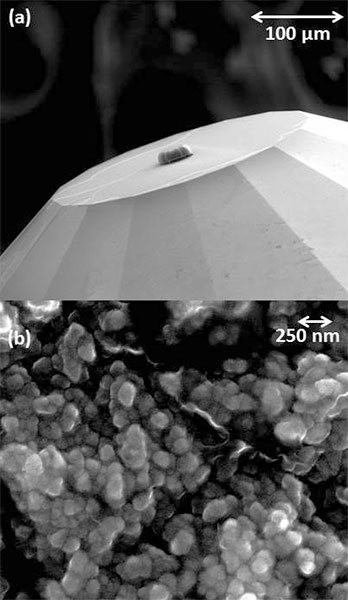 This nubbin on the flat surface of a gem diamond (top) is a nanocrystalline diamond, half the width of an average human hair. Higher magnification (bottom) shows the granular structure of the nanocrystalline diamond.“We have achieved 75 percent of the pressure found at the center of the Earth, or 264 gigapascals, using lab-grown nanocrystalline-diamond micro-anvil,” said Yogesh Vohra, Ph.D., a professor and university scholar of physics in the UAB College of Arts and Sciences. “But the goal is one terapascal, which is the pressure close to the center of Saturn. We are one-quarter of the way there.”

One terapascal, a scientific measure of pressure, is equal to 147 million pounds per square inch.

One key to high pressure is to make the point of the anvil, where the pressure is applied, very narrow. This magnifies the pressure applied by a piston above the micro-anvil, much like the difference of being stepped on by a spiked high heel rather than a loafer.

A more difficult task is how to make an anvil that is able to survive this ultra-high pressure. The solution for the Vohra team is to grow a nanocrystalline pillar of diamond — 30 micrometers wide and 15 micrometers tall — on the culet of a gem diamond. The culet is the flat surface at the bottom of a gemstone.

“We didn’t know that we could grow nanocrystalline diamonds on a diamond base,” Vohra said. “This has never been done before.”

In the 264-gigapascal pressure test at Argonne National Laboratory in Lemont, Illinois, the nanocrystalline diamond showed no sign of deformation. Vohra and colleagues recently reported this result in the American Institute of Physics journal, AIP Advances.

“The structure did not collapse when we applied pressure,” Vohra said. “Nanocrystalline diamond has better mechanical properties than gem diamonds. The very small-sized grain structure makes it really tough.”

As more micro-anvils are tested and improved, they will be used to study how transition metals, alloys and rare earth metals behave under extreme conditions. Just as graphitic carbon that is subjected to high pressure and temperature can turn into diamond, some materials squeezed by the micro-anvils may gain novel crystal modifications with enhanced physical and mechanical properties — modifications that are retained when the pressure is released. Such new materials have potential applications in the aerospace, biomedical and nuclear industries.

The micro-anvils are made in a Class 7000 clean room in the UAB Diamond Microfabrication Lab, using maskless lithography and microwave plasma chemical vapor deposition.

Vohra says his research team wants to generate smaller grain sizes in the nanocrystalline diamond, which may make it even stronger; understand how the nanocrystalline diamond is bonded to the gem diamond; and use ion beams to machine the top of the micro-anvil to a hemispherical shape. That shape will mean an even narrower contact point, thus increasing the pressure.

Testing is done at Argonne because it has a very bright synchrotron X-ray source that can probe crystal structure of micron-sized materials under pressure. Vohra and two graduate students travel to Argonne about four times a year.